We have already reviewed The Shootist and I won’t say more here except to add that despite the small part he had, it was one of Stewart’s finest roles. Gone of course was the Anthony Mann-style hard man with a rifle; he was an elderly doctor, who diagnoses JB Books’s cancer. At one point in the script he says that it’s been 15 years since he and Wayne had last met: it had been of course 15 years since they had starred together in a Western, Liberty Valance.


In The Cheyenne Social Club Stewart starred with his very old friend Henry Fonda. Sadly, it was far from being the greatest Western of either Stewart or Fonda but it is still rather charming and definitely worth a watch. 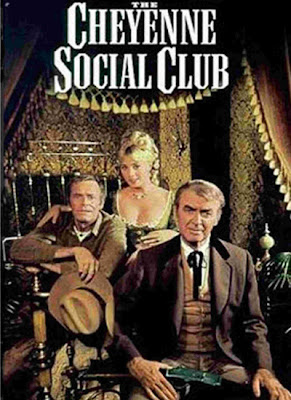 Curiously, The Cheyenne Social Club was produced and directed by Gene Kelly, not the first name you would think of when considering Western movie directors and it was his only Western. Nevertheless, he did a solid job. 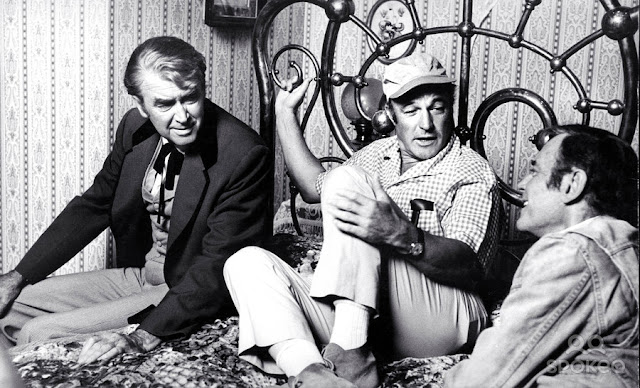 Oddly, considering that Henry Fonda had been lifelong pals with Stewart, they had only starred once together in a Western, Firecreek two years before, and the new film seemed almost to have been expressly written as a buddy movie for them, Fonda was quite reluctant to do it, pushing Jack Elam into the role. But writer Barrett and director Kelly didn’t want to hear for a minute about a Stewart/Elam partnership and when writer James Lee Barrett beefed up Fonda’s role and Henry was (unfortunately as it turned out) allowed to sing the title song, Fonda accepted.


As part of the beefing-up process came the opening dialogue (or rather monologue) over the titles and opening credits. It turned out to be the high spot of the picture and set the tone of the relationship between the two characters very well. You probably know it: Fonda drones on and on as the pair travel across the vast Western landscape, about his family and dogs and heaven knows what all else. Finally, Stewart speaks up:
“You know where we are now, Harley?”
“Not exactly.”
“We’re in the Wyoming Territory and you’ve been talkin’ all the way from Texas.”
Harley looks hurt. “Just been keepin’ you company.”
“I appreciate it, Harley, but if you say another word the rest of the day I’m gonna kill you.”


Texas, 1867. Cowpoke John O’Hanlan (Stewart) has inherited property in Cheyenne and accompanied by his pardner Harley Sullivan (Fonda), rides up to claim it. It turns out that the ‘social club’ they have acquired is a popular bordello. Harley is happy to enjoy its services but John, more prudish, decides to close it down. This very unpopular move leads to all sorts of complications with the badman Bannister (stalwart heavy Robert J Wilke) beating up the brothel Madam (Shirley Jones, very good) and Harley gunning him down in revenge. Now Harley has poked a stick into a hornet’s nest, for the whole Bannister clan wants revenge... 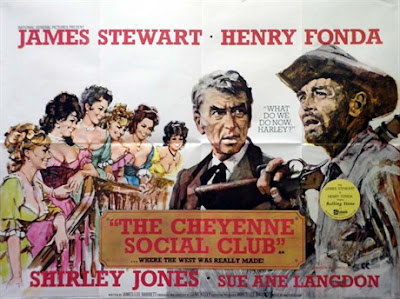 It was a very bad time for Stewart. He received news that his stepson Ronald had been killed in Vietnam. He was increasingly deaf. His poor old horse Pie, of which he was inordinately fond, was dying. It must have been hard to act in a comedy. Fonda was a huge support to him (and painted Stewart a charming portrait of Pie which Stewart treasured).


Few would pretend that The Cheyenne Social Club is a great Western. It is, however, charming and to see the two great Western heroes in harness in their declining years is very enjoyable. Despite Barrett’s iffy record as Western writer (Shenandoah, Bandolero!) the dialogue is amusing. There's good William Clothier photography of some New Mexico locations and the excellent John Dehner has a small part.


The movie has its weaknesses. There are plot inconsistencies and the pacing is poor. The writing sought to be daring about the brothel setting yet Disneyesque about its goings on, a hard tightrope to walk. Stewart took umbrage even at the PG rating but what did he expect in 1970 of a movie about a whorehouse?


But we forgive it all for the easygoing friendly rapport between the two principals. 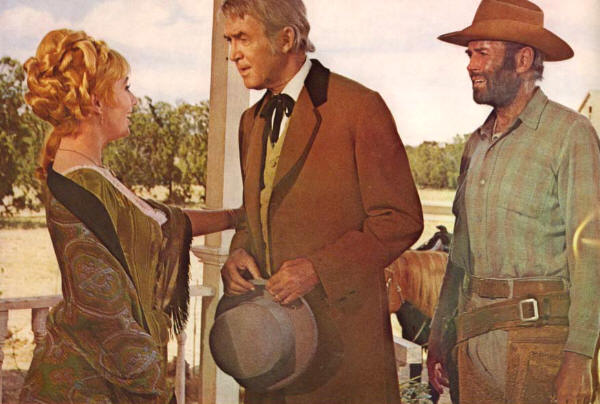