This movie, which we must probably count as Glenn Ford’s ninth Western, commits two cardinal sins against the genre: it is set outside the American West and occurs in modern times. Still, it’s part of the Ford canon and it does get more and more cowboy as it goes along. It even ends with a classic Western showdown. 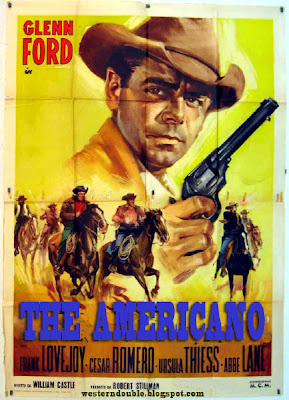 
Sam Dent (Ford) wants to start a ranch in Texas and aims to make $25,000  by delivering three Brahma bulls to a rich landowner in up-country Brazil. Once there, he encounters skullduggery of every kind, dusky maidens, ferocious wildlife and wicked bandidos. It’s all go.


Glenn is, of course, excellent and behaves properly as the laconic, tough loner, as all good cowboys must. Unfortunately Frank Lovejoy as the wicked Brazilian cattle baron is from The Bronx and it shows, or rather we hear it. Never mind, he is villainous enough and has a splendidly evil henchman, Rodolfo Hoyos Jr.

The star is really Cesar Romero who has a part to die for, a gaucho-bandido-private detective. Wow. Romero does an excellent interpretation of Anthony Quinn (who definitely should have had the role). He is dashing, charming and roguish. 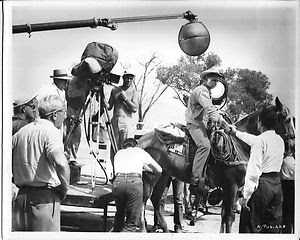 
The women are appropriately sultry. Ursula Thiess (who was Mrs. Robert Taylor) is a ranch owner whose property Bronx Frank wants to grab and she duly falls for Glenn. Cesar’s woman is Teresa (Abbe Lane) who is pretty sensational and gives us a song and (boy!) a dance. A full South American dance band seems to materialize in the jungle so that she can gyrate to it. It’s the highlight of the film. If you are a man.
If you’re not, I’m sure you understand. 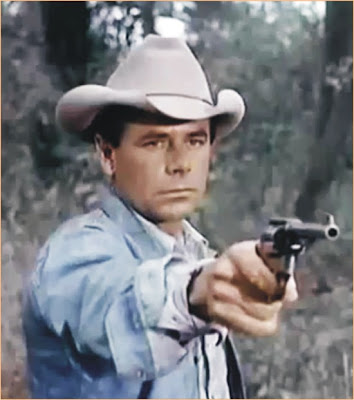 
Wildlife stock footage has obviously been cut in (the color’s different) so that we can alliteratively thrill to pumas, piranhas and parrots.


As a Western director, William Castle was known for such art movies as Jesse James vs. The Daltons and The Law vs. Billy the Kid but was more usually at work at horror pics. This one didn’t win too many Oscars, I’m afraid. Still, always good to see Glenn.