Glenn Ford’s Western career started auspiciously with an excellent little picture for Columbia – he and young William Holden were both recently signed contract players for the studio. 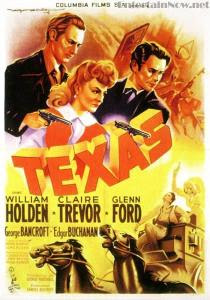 
Texas was not in many ways a major picture. It’s a 90-minute black & white with (then) pretty unknown leads. It was certainly overshadowed by big studio numbers like Warners' Errol Flynn/Raoul Walsh Custer bio They Died With Their Boots On or Fox's Fritz Lang-directed Western Union with Randolph Scott, or indeed MGM's Robert Taylor picture Billy the Kid, all of which came out in 1941. But it’s a sleeper, an unpretentious Western that manages to blend humor and drama very successfully.


It was directed by George Marshall, fresh from his successes in Destry Rides Again in ’39 and When the Daltons Rode in ’40. Like them, Texas has unpretentious energy and spirit with a good dose of laughs. Marshall had been at it since the very early silent days: his first Western was Across the Rio Grande in 1916 and in fact he had started as a lad doing stunt work in early Westerns for Universal, but about the time of the Second World War and after he really came into his own. He directed Glenn Ford several times (this one,  The Sheepman and Advance to the Rear, as well as doing some - uncredited - direction of Lust for Gold), always with success. With Destry Rides Again (and its 1954 remake Destry) and The Sheepman to their credit, director and star are assured of a place at the very summit of the Comedy Western Parnassus. 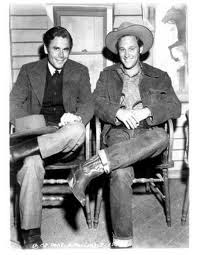 
We start in Abilene, 1866. Former Rebels Dan (Holden) and Tod (Ford) are caught stealing a hog and fined an impossible sum by a spittoon-using pro-Union judge (Raymond Hatton). A railroad baron, Windy Miller (George Bancroft) bails them out and they witness the hold-up of a stage. They rob the robbers. Tod aims to give the money back to its rightful owners but Dan has other ideas. They split up and go their separate ways. Tod lands up as a cattle ranch hand where he falls for the rancher’s daughter, Mike (Claire Trevor, excellent). Dan falls in with rustlers who turn out to be the same gang that held up the stage but he meets and falls for Mike too. (As you probably know, there's quite a tradition of Western gals being called Mike).


To say this Western is action-packed is an understatement. It gallops along at breakneck pace with many a yeehar. There's a cattle drive to Abilene (and the inevitable line "The East needs beef" does not fail to make an appearance) and rustlin' and stampedes and a prize fight and shoot-outs galore.


It was Edgar Buchanan’s favorite movie. He appeared 13 times with Glenn Ford and they were buddies. Here he plays a wonderful crooked frontier dentist – it’s a great part – and of course it’s funnier if you know Buchanan had been a dentist in real life before arriving at Tinseltown.

It's a buddy movie that foreshadows Butch Cassidy and the Sundance Kid and a host of imitations like Alias Smith and Jones.


Texas is a terrific little film (coming after Arizona of the year before, Holden's Western debut, also excellent) and was a great launch pad for Glenn Ford’s wonderful Western career.