Shenandoah was more a Western than Gone with the Wind is but it’s still really only a family saga and war film. 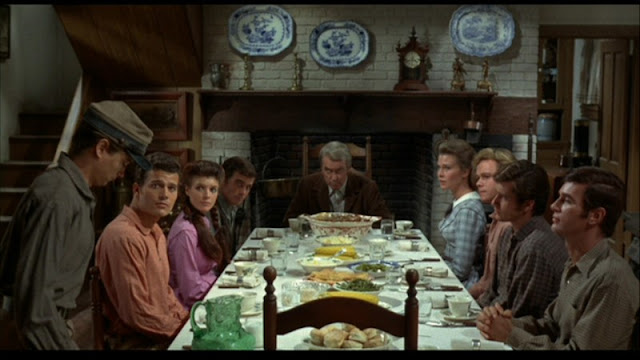 Never mind about the anachronistic guns. What about the clocks? That clock on the shelf is French, c 1900.
I know about clocks.
(Not sure about the plates though).


James Stewart does ride Pie again, so that’s good, even if he has finally abandoned his sorry hat. Do you think that’s why this Western wasn’t very good? There may well be a correlation there that it would be worth exploring. I mean take Charlton Heston, for example. He made Major Dundee and Will Penny, quality Westerns both, then someone stole his hat on him. "Hats are very important. I used that hat in about four Westerns. Then someone stole it on me. Wish I could find him. I’d kill him. You get a good hat, you gotta hang on to it." Well, it was all downhill from there, wasn’t it. The Mountain Men? Oh dear. Then TV. No, it was losing the hat that did it. There’s room for a good PhD thesis here, you know.
Anyway, back to James Stewart. Shenandoah was a Universal Western with Jimmy Stewart and I guess the public might have been thinking longingly of Winchester 73s or naked spurs as they waited in line but Shenandoah was very far removed indeed from the Anthony Mann days of the early 50s.
This movie, written by James Lee Barrett, is often sentimental and sometimes downright soppy. It was James Lee Barrett’s first Western as writer. He did two others with his friend Stewart later, one of them the utterly appalling The Rare Breed the year after, one of the worst Westerns ever made. Stewart should really have got someone who understood the Western.


Andrew McLaglen directed but Ford/Wayne protégé McLaglen was workmanlike at best and never inspired. His first Western as director had been the almost-TV-spinoff Gun the Man Down with James Arness in 1956, then he had done Gunslinger, Rawhide and Have Gun, Will Travel episodes for TV and then McLintock!, about which we may say that it is another bad Western with an exclamation point in the title – uh oh. So his track record was hardly Olympic. And the year after, he directed The Rare Breed. Aagghh! Come to think of it, Cahill US Marshal was the nearest McLaglen ever got to directing a good Western, and quite fun, even if was only really a commercial Batjac vehicle for Wayne.
William Clothier photographed Shenandoah, so that was good. Frank Skinner provided the big, rolling music, inevitably based on ‘Shenandoah’ and that was satisfactory too.
You probably know the story. Stewart is a Virginia paterfamilias, crusty and dogmatic, who has kept his family out of the Civil War but finally, in September 1864, the war comes to get them... 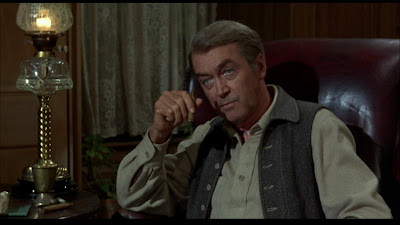 His numerous sons, led by Glenn Corbett and Patrick Wayne, are a bit ‘straight’ and colorless. Some of the supporting parts are very good, however, notably George Kennedy, who is really quite moving as a Union colonel in his (too) short part. Doug McLure, as the Confederate husband of Stewart’s daughter, Philip Alford as the youngest son, who is captured, the great Paul Fix as the doctor, Katharine Ross in her film debut as the daughter-in-law, all these do sound jobs. Strother Martin stands out, as always, in his tiny part as the train engineer. Denver Pyle as the preacher lets himself down by trying a hokey accent, not a good idea (he’s supposed to be Swedish but it comes over as cod Irish). Denver was never likely to be chosen to play Ibsen, I’m afraid.
The movie was obviously a statement about the Vietnam war, Hollywood style, and has some worthy anti-war sentiments in it.
It was shot in California and Oregon, but passes for Virginia. There’s one biggish battle, even if the opening war scenes had been used before in Raintree County and How The West Was Won. Fair enough, why not? It’s nicely photographed and very colorful. If you like family dramas you’ll enjoy this movie, and it was a commercial success. It was turned into a Broadway musical, amazingly. But I don’t rate it very highly, I’m afraid.
Shenandoah was enough of a success to convince Stewart that Westerns were once more the way to go. So he got together with Universal and Andrew McLaglen again the following year to do another, hoping to pocket a few more moviegoers' $$$. Disaster!