Othello of the Plains

It has to be said that part of Glenn Ford’s success in playing Jubal Troop in Jubal, his eleventh Western, and director Delmer Daves's fourth, comes from the fact that he was opposite two hams. Rod Steiger only had two acting modes, (a) overacting and (b) overacting wildly. He does at least choose the former here but that’s about all you can say. As for dear old Ernest Borgnine, he was quite sweet in this part, trying hard for the naïf, genuine, slightly dumb but kindly Shep, the rancher, and he did his very best. But Ernest was an Easterner through and through and never quite convinced in Westerns. He was great as a heavy in gangster pictures and so forth of course but Westerns? Well…  I make an honorable exception for The Wild Bunch, naturally. 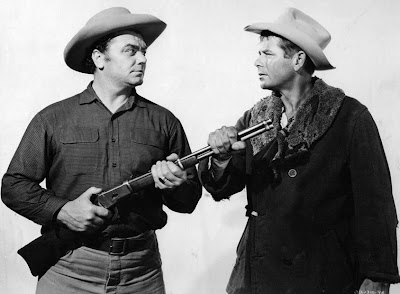 So Glenn Ford’s almost GaryCooperish underplaying wasn’t really needed here. He could have hammed it up a bit and still seem classy. But that wasn’t his way. Slow, quiet, strong, and say it with your eyes, that’s what he preferred. And he was outstanding.


Ford later said, "Rod...well, in kindness I think I should say he did a great job with his role. However, the 'method' got a little too much for some of us, especially the wranglers … Look, Rod won an Academy Award, didn't he? And so did Ernie, so whatever Rod was doing in his role for Jubal probably worked for him. He was intense, I'll tell you that." This was gracious of Ford and a typically polite way of saying that Steiger and Borgnine both overacted. 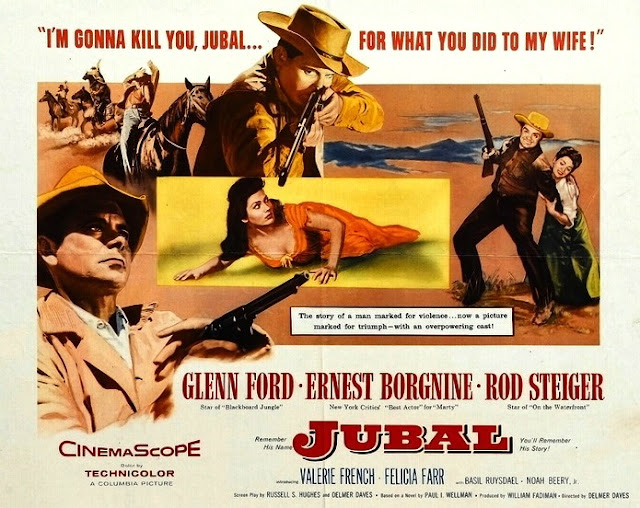 It was important because this was another ‘psychological’ Western which depended much on the interplay between the characters and less on out-and-out Western action (not that Daves ever went for fastest-gun-in-the-West action Westerns). It famously has echoes of Othello as the Iago-like ranch hand Pinky (Steiger, in a part not in the original book) poisons Othello/Borgnine’s mind with suspicions about his lovely wife Desdemona/Mae (Valerie French) and Cassio/Jubal. It must be said though that the Shakespearean echoes are faint. Unless, that is, the Bard had hidden in a drawer a first draft which included two Desdemonas, one a pretty fast mover when men were around.

For Jubal nobly resists the advances of the brazen Mae in favor of a fresh and pretty girl in a troop of traveling ‘Rawhiders’, Mormons possibly (though this is never stated), played by Felicia Farr in her debut (and the first of three Westerns she did for Daves). And we all know of course that hell hath no fury like a woman spurned and Mae is sure spurned, though not the way Iago/Rod tells it of course. The relationship between Ford and Farr (another recent Columbia acquisition) is touching and done very tenderly. The love is shown as pure and contrasted with the profane type displayed by Mae. 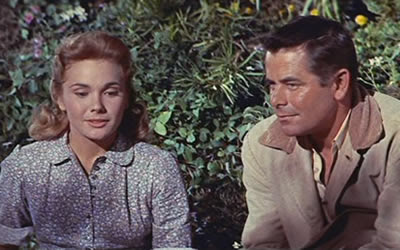 I actually felt sorry for Mae. She is supposed to be Canadian (probably to mask her British accent) and has married Shep to escape a bad life back home. But, poor woman, what is she supposed to do on the wild ten thousand Wyoming acres? Her husband tries to be loving but he is coarse and vulgar. She has nothing to do and in her Joan Crawford-style green scarf is a beautiful young woman in her prime. Interestingly, the women are at the heart of this film, and in Daves Westerns that is far from always the case. In so many Hollywood oaters they were just appendages, starlets added for box-office appeal but extrinsic to the story. In Jubal the action revolves around them.


Pinky, Mae’s former lover, hates Jubal, whom Shep has rescued from a Wyoming blizzard and given a place on the ranch, because Jubal has worked as a sheepman (actually, though, it wasn’t till 1958 that Glenn did that, as we know) and because Shep promotes him over Pinky’s head to be foreman. And as if that weren’t enough, Mae starts to make eyes at Jubal, and Pinky is supplanted in her affections. Hatred and tension build.

Interestingly, Daves and Russell S Hughes, who adapted the first part of Paul Wellman's novel Jubal Troop for this film (the novel goes from Indian fighting to oil drilling), invent a backstory which is not in the book. Jubal tells Felicia how as a boy he had fallen in the river, his mother had refused to try to save him and his father had died trying. 50s films liked Freudian frissons of this kind and childhood trauma to explain a broken life. But really, the episode is recounted in order to give an Oedipal tinge to the story more than an Othello one. Jubal's guilt at his father's death and perhaps sub-conscious longing for his mother is echoed with his rescue in the snowstorm by Borgnine, who becomes a father-figure, and by Jubal's undoubted attraction to Ernest's wife (though he resists it). Psychological, huh.


Pinky part-times as leader, with Jack Elam, of a mob of anti-sodbuster vigilantes and they try to run the Rawhiders off. Jubal intervenes to protect the settlers and overrides Pinky – more reason for hatred – and is aided by a cowboy traveling with the wagon train, Reb (Charles Bronson, after he had ditched his Buchinsky name and two years after playing Captain Jack in Daves's Drum Beat). Bronson is actually rather impressive in this. His part is grossly underwritten and his chance to shine is very limited indeed but he does a good job, implying an air of mystery.


Noah Beery Jr. is excellent as one of the ranch hands, genuinely decent and unhappy at the turn things take, and he succeeds in elevating his small part to be quite a prominent one. He often did that.

Pinky’s end is very subtly suggested by Daves. The horror of it is not lessened by its not being shown. If anything, the reverse. Daves had a lifelong fear of - yet morbid fascination with - death  by hanging, witness of course his last Western, The Hanging Tree, with Gary Cooper, and several near-lynching scenes elsewhere.


Jubal is a curious name. Maybe it was a reference to Confederate commander Jubal Early or perhaps it refers to the Biblical descendant of the outcast Cain. Maybe both.


Visually, the picture is very fine. All Daves's Westerns were. Charles Lawton, Jr.'s cinematography makes full use of the then-new CinemaScope screen shape and Grand Teton, Wyoming locations. Full marks to him and Delmer Daves, and the quality of the DVD is very good. The movie has almost a Shane/Loyal Griggs-like look to it sometimes. Lawton did three Westerns for Daves, all beautiful, as well as others for Budd Boetticher and even John Ford. He was an artist.


Jubal is a HUAC-era film and the plight of the hounded innocent man takes on double meaning. It is interesting to see also how the base informer is scornfully sent away as beneath contempt.

Daves often managed to slip in a line or two at the very limit, for the 50s, of Production Code acceptance. Here he has perhaps the sauciest double-entendre of all, when Jubal is rolling a cigarette and gazing up at seductive Mae in her lighted bedroom window. His pal Reb, who is very astute, understands instantly the attraction - and the danger - and says to Jubal, "Tried to roll them cigarettes once but I couldn't learn to keep my finger out." Silently, Jubal shows him his cigarette successfully rolled, with his finger out. The message is clear.

At the end, Jubal rides off with the wagon train of outcasts (they are more disreputable and unwashed in the book). Daves often did this at the end of his Westerns. White settlement is repressive and corrupt, and the hero prefers the wild. 3:10 to Yuma was an exception because we presume that at the end of it, Van Heflin goes back to decent farming life with his family, but if you think of the ending of Broken Arrow, The Last Wagon or Jubal, the hero prefers to go off into the untamed frontier. It is the white 'civilized' world that creates all the problems and suffering. The boss of the Rawhiders he goes off with, Felicia's dad, is named Shem, very close to Shep, and he becomes the new father-figure. I hope he won't suffer another Oedipal ending. Shem is played, by the way, by Basil Ruysdael, General OO Howard in Broken Arrow. Like many directors, Daves liked his 'stock company' of trusted actors about him.


Glenn Ford said, "Del was a very fine director. I think the three films we did together hold up well, even today. You know, I can't tell you why we had good chemistry. He was always prepared and he knew what he wanted to achieve with a film. I owe Del a lot of credit in my goal to portray a real cowboy, not an actor pretending to be a cowboy. He saw potential in me and I hope I didn't disappoint him." No, Glenn, you didn’t disappoint.


Ford added, "Nothing happened in a Delmer Daves film that wasn't intentional, from the camera set-ups to the wardrobe. He was like Fritz Lang in that way. For some reason, and it has nothing to do with me, Jubal, 3:10 to Yuma, and Cowboy are probably the best Westerns I made. It could be the good stories but you've got to give Del a lot of credit. Jubal was a difficult script that Del wrote for [Columbia boss] Harry Cohn. Harry really wanted to do this film. The story floated around Hollywood for over a decade, and Columbia put a lot of money into its development."


Jubal was an extremely good film and ranks with The Sheepman and 3:10 to Yuma in my view as the summit of Glenn Ford’s Western achievement. It was perhaps not the very greatest of Delmer Daves's Westerns but it was certainly not the worst either.