Between Firecreek, an enjoyable pairing of James Stewart with his great pal Henry Fonda, and another Stewart-Fonda outing, The Cheyenne Social Club in 1970, Stewart did Bandolero!

Having that exclamation point in the title it is obviously dubious as a Western (cf McLintock!, Ride, Vaquero! , Reprisal!, Joe cercati un posto per morire!, etc). And it was directed by second-rate Andrew McLaglen who on good days rose to the workmanlike but could also do some Westerns that were frankly dire.

Still, Bandolero! had its points.


The plot owes more than a little to The Bravados of ten years previously. James Stewart pulls the same false hangman trick and lets his brother Dean Martin escape the noose. Only before, there was a magnificent Gregory Peck to hunt the escapees down, while here we have George Kennedy at his most stolid, not to say stodgy.

Curiously, Kennedy plays Sheriff July Johnson who has Roscoe as his deputy (Andrew Prine). This was twenty years before Lonesome Dove, by which time July has got younger and moved to Fort Smith while Roscoe has been, er, resurrected. 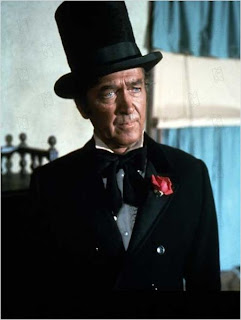 Not a costuming success, really.
It has some good William Clothier Texas and Utah location photography (though also an awful lot of dull motivational talking on a sound stage) and the Jerry Goldsmith music is OK. There are many good actors in supporting roles and one might mention especially Will Geer as a horrible old bandit, Denver Pyle bossing people about in town, and Harry Carey Jr. is there too. So is low-budget Western star in decline, Don ‘Red’ Barry. TV Western stalwart Jock Mahoney (Yancey Derringer, Laramie, Rawhide, you name it, and 77 episodes of The Range Rider) is there as Racquel Welch’s husband but he gets shot in the bank in the first reel. 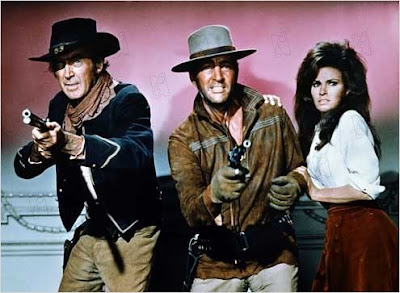 
Ms. Welch is decorative but her Mexican accent is pretty lousy. Dean Martin does his Dino bit but says he is tired in the script and acts accordingly. He was like Robert Mitchum in that way, ready to sleepwalk through roles. James Stewart is, of course, superb. Actually he’s far too good for this movie. He saves Dean from hanging but also from falling prey to the dialogue. 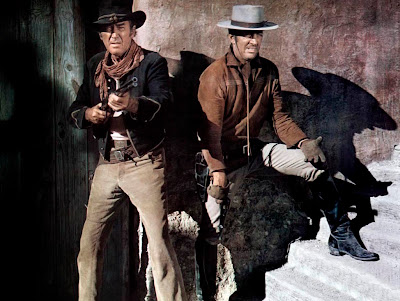 Dino: "When did you say this shoot ends?"
Jimmy: "Aw shucks, Dean, it's money in the bank."
It’s not a terribly bad Western (it's miles better than The Rare Breed, for example) and as I have said above, it has its moments but it never really recovers from the hokey script (James Lee Barrett again, from a story by Stanley L Hough).
There is a long, too slow chase as July pursues the gang into Mexico. Things hot up a bit with a high body-count shoot-out at the end as endless Mexican bandits fall, Magnificent Seven-like, to the guns of the Americans.  All in all, though, been there, done that.