The first of a great series

Seven Men From Now was the first of the seven Westerns (two for Warners, the others for Columbia) that the colorful Hemingwayesque figure of Budd Boetticher made with Randolph Scott as tough hero, and it was one of the four Burt Kennedy wrote. Kennedy himself considered it the best and perhaps it is, though I find all four of the Kennedy ones excellent and my own personal favorite is Ride Lonesome. Seven Men is certainly as good, especially in the restored color print. 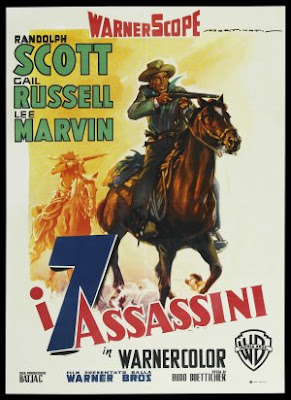 Many of these films were made as second features, which simply don’t exist any more, and they had to be short. At their worst, short minute-budget Westerns were churned out commercially and had little merit, and less originality, but at their best - and this one is among the very best - they were little gems. Tight, concise, carefully constructed and simply shot, they were quality actioners with convincing scripts and impressive acting.

Kennedy is interesting about the script in his 1997 memoir Hollywood Trail Boss. He was working for the John Wayne/Robert Fellows partnership and penned it with Duke in mind. They paid him $250 a week for six weeks to write it (it took eight weeks, the last two unpaid). "Wayne didn't read it," says Burt, but Nate Edwards, the production manager, did and said, "It's all right. There's a typical shoot-out in the rocks." That was kind of damning it with faint praise! "So nobody paid any attention to it," Burt continues, "and it was there in a storage closet in the coffee room for about a year." Later Kennedy was offered $15,000 for the script by a producer - "I forget his name" - as a project for Robert Mitchum. Suddenly Wayne got interested again. Jack Warner liked it and wanted Wayne to do it but Duke was taken up by The Searchers. It was offered to Joel McCrea (that would have been interesting) but he turned it down. "They gave it to Robert Preston and I don't think Bob ever read it." So the screenplay had had quite a checkered history before it landed on Randolph Scott's desk. Randy loved it, and hired Boetticher to direct.


It starts badly with an awful song (which Boetticher and Kennedy hated) over lurid titles as Scott walks over a sound stage in the ‘rain’. But immediately the first scene, in which Scott, whose wife has been killed in a hold-up, catches up with the first two men of the title, is tense and gripping. 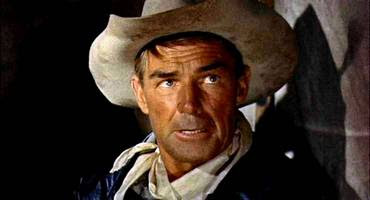 The picture is ‘small’ in the sense that there are no huge themes of conquering the West or building transcontinental railroads. Instead, it is a personal drama with a small number of interesting characters subtly portrayed by fine actors.


Scott is absolutely excellent as Ben Stride, the ramrod-stiff implacable ex-sheriff out for revenge. He has lost his wife, job and status and has to live it all down. As a perfect foil, Lee Marvin as Masters is brilliant as a charming, nasty, clever villain, in his flamboyance the antithesis of Stride. Walter Reed (a favorite character actor of John Ford's) as the weak Easterner who learns Western grit and Gail Russell as his beautiful wife who is drawn to Stride are also first class. 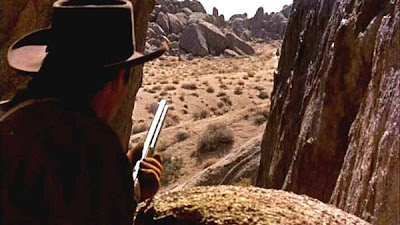 Marvin's henchman is Don 'Red' Barry. Red Ryder in the Republic serial in 1940, he went on to do several Westerns for the studio but his combative, angry nature made many dislike him. By the 50s he was doing very low-grade pictures for Lippert and other minor studios. He got some work on Western TV shows. He descended to bit parts, even uncredited. The role in Seven Men was a step back up for him. But Boetticher didn't like him at all. "He was very lucky to get the part," Boetticher said. Barry committed suicide in 1980.

Visually the film is attractive. William Clothier photographed it in California locations representing Arizona. Amusingly, when it came to Buchanan Rides Alone, filming was done in Arizona while the story was set in California... There is no fancy camerawork; it’s all pretty simple. But it’s classy.

The music by Henry Vars is melancholy and haunting.


Like the whole film: an unpretentious, high quality little Western that has been much underrated. 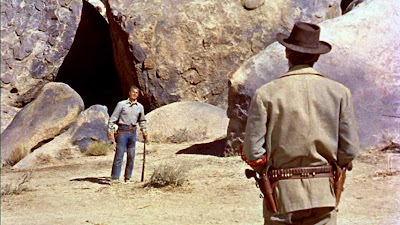