With Ride Lonesome, the excellent quartet of Budd Boetticher behind the camera, Randolph Scott in front of it, Harry Joe Brown wielding the checkbook/groaning and Burt Kennedy at the typewriter was back at work in the next of the series of modest-budget Westerns they made in the 1950s. Indeed, you could regard all seven of the movies as simply episodes of the same long film. Actually, more than a quartet it was a quintet because the best of the series had Charles Lawton Jr at the camera, and this was one of them. Visually the picture is superb. 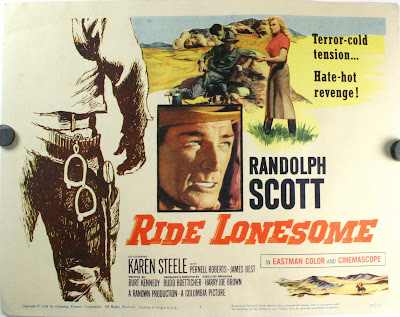 In this film, Scott is once again a scarred, hard man out for revenge for a murdered wife. Randy seems to have got through the wives at a rate of knots. This time the innocent woman has been kidnapped by Lee Van Cleef and brutally hanged from a cross-like hanging tree. But we only discover this towards the end and maybe I shouldn’t have told you that yet (and translated film titles such as L’Albero della Vendetta did the movie no service).


Scott is once more splendid. All the smiley happy-go-lucky side to his character evident in the previous two (non-Kennedy) pictures has gone. He is no Buchanan, but a hard-as-nails bounty hunter out for vengeance. "There are some things a man can't ride around."


There has to be a charming and witty villain who grows closer to Scott as the picture develops, that’s de rigueur in these Westerns, and this time Pernell Roberts, who took the role of Adam in Bonanza the same year, does the job, very well. He oozes sex-appeal (these movies contained some quite daring sexual innuendo for the time) and is, like Lee Marvin, Richard Boone, John Carroll and Craig Stevens in previous episodes, a complex character, talkative to Scott’s stoic silence and moving from the bad towards the good. Roberts’s sidekick is James Coburn, excellent in his first big role, as a country bumpkin. The (added) scene where Roberts makes him a partner is great.

James Best (Tom Folliard in the previous year’s The Left-Handed Gun), is terrific as Van Cleef’s nasty little brother who is taken back to Santa Cruz for his second hanging. He did sneery punks better even than Skip Homeier.


Karen Steele, still Boetticher's companion at this time, is, however, totally out of place in her 1950s blonde hair and, it looks like, Jane Russell bra. She doesn’t act well and, as was often the case with women in 50s Westerns, is just there as a sex object to be weak, to need protecting and to be lusted after. Boetticher made the most of her curves outlined against the landscape. 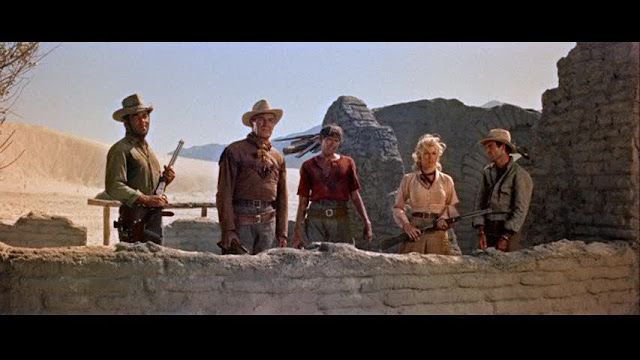 This movie is in CinemaScope for the first time and Boetticher uses the wide screen and more panoramic possibilities to create a lot of ‘dead space’ in order to make the characters even more ‘lonesome’. Martin Scorsese points out that the ‘loner’ has been a theme running through all great American fiction, from Moby Dick to Taxi Driver, and is an essential element of the Western myth. It's a great title because archetypal cowboys 'ride lonesome'.

Filmed up at Lone Pine, this is one of the more visually attractive of the series.

For real Westernistas, I mean the hard-core sad cases like me, and maybe, dear reader, you, Robert Nott, in his excellent book The Films of Randolph Scott, writes:

Boetticher and Scott were ... poking gentle barbs at John Wayne. There's a reference to the town of Rio Bravo, ... the Indians trailing Scott and company along the desert ridge ride in a similar formation to the warriors who pursued Wayne and his posse across the river in The Searchers, and Scott takes an arm-across-the-torso pose similar to the one Wayne took as he stood outside the doorway in the climactic shot in The Searchers. Scott even gets a Wayne line from that film: "That tears it" and delivers it in Wayne fashion!

I think that Mr. Nott may have watched too many Westerns but (a) so have I and (b) that's impossible.
The suspense builds. The plot unravels piece by piece. The characters learn from each other. Then there is a stunning, climactic ending which makes Ride Lonesome, in the view of this writer, the best in what is anyway an absolutely excellent series of Western movies.