The Mann/Stewart Westerns: the end of the affair 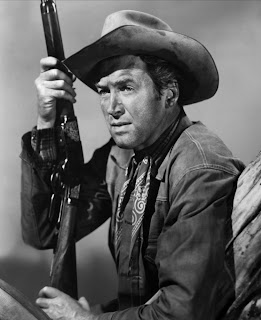 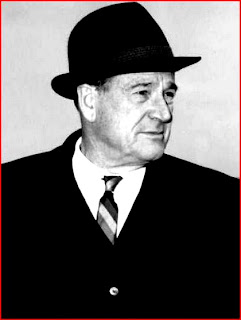 Anthony Mann
We reviewed The Man from Laramie (Columbia, 1955), the last of the five Anthony Mann/James Stewart Westerns, in December last year (click the link to read that).   I think it was the greatest of them. In some ways it was a synthesis, a deliberate attempt to combine and sum up all the features that had made the others so good. Mann himself said, “I wanted to recapitulate, somehow, my five years with Jimmy Stewart. I reprised themes and situations by pushing them to their paroxysm.”


Paroxysm, eh? I don’t know about that but certainly the by now classic Mann/Stewart themes are there (driven man-with-a-mission, tough-guy Stewart, wild terrain and so on) and there are also echoes: Arthur Kennedy pushes Donald Crisp off his horse while riding a ledge just as Robert Ryan did to Stewart in The Naked Spur; Kennedy and Stewart shoot it out on a mountain top as Stephen McNally and Stewart had done in Winchester’73; there are others.


It was the most violent of the Westerns and though tame by today’s post-Peckinpah (or Tarantino...) standards was shockingly so for 1955. But the post-Second World War audience had, many of them, known worse in real life and were ready to accept the realism. And it brought the Westerns into line with Mann’s noir and war films.


Stewart proved his toughness by doing his own stunts, rolling under spooked horses’ hooves in the fist-fight, being dragged through a camp fire. It made the character of Will Lockhart more gutsy and physical than the Stewart heroes in the others.


As I said in my review, the picture does have its weaknesses, notably in the poor acting of Donald Crisp, Alex Nicol and, sad to say, Arthur Kennedy. Poor acting and poor writing of their parts.


But Laramie remains the high-point and culmination of the Mann/Stewart collaboration.


Of course, Mann made other Westerns without Stewart and Stewart made others without Mann. It must be said that while Mann directed some fine ones (The Tin Star with Henry Fonda in 1957; Man of the West with Gary Cooper in 1958) Stewart did not fare so well afterwards: the pretty forgettable Night Passage in 1957, the Western family saga Shenandoah in 1965 and the quite shockingly dreadful The Rare Breed in 1966. Yes, he worked with John Ford but only later, on frankly lower-quality pictures such as the ho-hum Two Rode Together with Widmark, the over-talky and studio-bound black & white Liberty Valance and Cheyenne Autumn, in which he really only did a hammy cameo (as Wyatt Earp). Firecreek wasn't too bad but it wasn’t till his last Western, when he was 68 and suffering from deafness, that he excelled again, though in a very small part, in the magnificent The Shootist.


But anyway, let’s talk about Night Passage because that was to have been another Mann/Stewart collaboration. And indeed, with Aaron Rosenberg producing, Borden Chase writing it, William Daniels at the camera, impressive locations, Dan Duryea as the villain and with Jay C Flippen, Jack Elam and Robert J Wilke all lined up in the cast, it looked to be quite simply the sixth in the series. 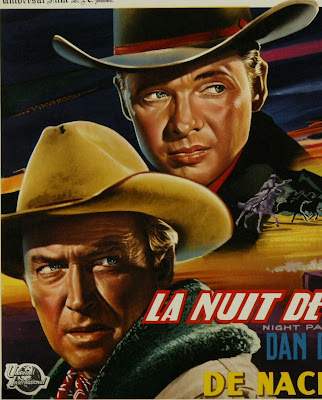 
But it was not to be. Mann did some preproduction work and might even have directed a few of the early scenes but Stewart and Mann seem to have fallen out. The whys and wherefores are not entirely clear but apparently Stewart was determined to incorporate some features which Mann felt (as it turned out rightly) were, well, shall we say inappropriate. Mann said later, “The story was so incoherent that I said the audience wouldn’t understand any of it. But Jimmy was very set on that film. He had to play the accordion and do a bunch of stunts that actors adore. He didn’t care about the script whatever and I abandoned the production. The picture was a total failure and Jimmy has always held it against me.”


It was pretty poor, Mann was right there, though it wasn't a "total failure". Stewart plays and sings. He ought not to have. Mann’s replacement James Nielson was an unknown and directed only three feature-film Westerns, mostly doing TV work. He really just let Stewart have his head. Unfortunately. Audie Murphy as Stewart’s outlaw kid brother was willing and earnest (as always) but it wasn't a very convincing role. Duryea chewed the scenery in a totally over-the-top way, as he was wont to do. There’s a hokey kid for Stewart to impress (Brandon de Wilde, a bit more grown up now than the whiny brat in Shane and not too bad in fact). The women are token, honestly. 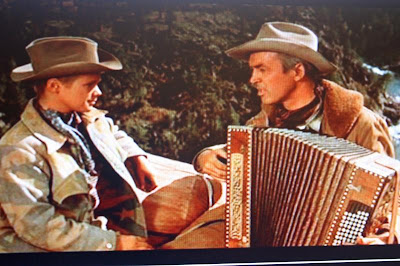 It was a mistake, Jimmy
Bosley Crowther in The New York Times summed up the cast pretty well when he wrote, "The Utica Kid of Audie Murphy is a dew-dappled, boastful little tough, and the chief railroad robber of Dan Duryea is a vainglorious, comical scum. Jack Elam's Shotgun is a scoundrel, Robert Wilke's Concho is a cur and even Brandon de Wilde's Joey Adams has a streak of the outlaw in him. While he throws in his lot with Mr. Stewart, he keeps a soft spot in his heart for the Utica Kid. Likewise, the chief railroad builder, whom Jay C. Flippen plays, is a bit of a louse, and both the females (Dianne Foster and Elaine Stewart) two-time their men."


Yes, the movie does have its points. There's a good bit of action. The Colorado scenery is great (and by the way if you can get down into the Centennial State, that Durango/Silverton railway up through the gorge is quite something, ça vaut le détour, as the Michelin guide used to say). I also like the stirring Dimitri Tiomkin/Ned Washington score (once you get past Jimmy’s accordion).

Audie. He did his best.


But it bombed at the box office and was panned by the critics. You just get the feeling that if Anthony Mann had directed it, it could have been another in the excellent series. As it was, Night Passage was little more than a star-vehicle 'just another' Western. 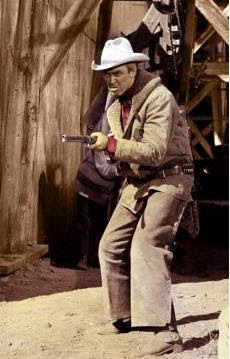