Mann of the West 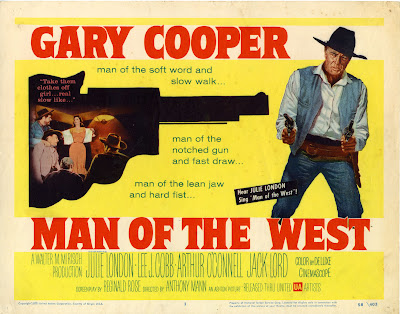 One of the best Westerns that Anthony Mann directed was not with James Stewart at all, Winchester ’73 and The Man from Laramie notwithstanding, but one of the last he made, Man of the West with Gary Cooper.


I watched it again last night.


The first thing that strikes you is not Mann at all but Coop. Stewart was good in Westerns and got better, but he was no Gary Cooper. I have said elsewhere, in other e-pages of this blog, that I consider Cooper to be the very greatest of all the Western actors, and if you watch this movie you’ll see why.


When we first see Link Jones, riding into town to get a train and seeing off Marshal Frank Ferguson, we almost think we might be in for Along Came Jones 2. Cooper had a gift for light comedy and here his facial expressions and movements seem almost comic. He hasn’t ridden a train before (we are led to believe he is a man of the wild, not a man of the world) and is skittish as a colt about it. There he sits, in a suit, his long legs wedged into a tiny seat, carpet bag on his knee. Don’t be fooled. As soon as the train is held up, the real Coop comes out.


To signal this change, he takes his coat off. Cooper often did this – look at High Noon. As soon as the ‘civilized’, almost Eastern manners have to be put aside in favor of action, the coat comes off and the rest of the time he’ll be in a vest and shirtsleeves. When Coop takes his coat off, watch out.

The hero is that famous Anthony Mann figure, and classic Western idea, a man on a journey. It is a journey of discovery and development as much as a physical one.
Link, a saloon girl, Billie (Julie London – excellent) and a tinhorn gambler Sam Beasley (Arthur O’Connell, also very good), are all three left behind by the train (civilization, law & order are gone) and they make their way to a lonely farm. Link knows the area. There’s a reason. This is the base of a gang of thieves of which he used to be a member. He’s that well-known Western movie character, and classic Anthony Mann figure, a man with a past. And as soon as they enter the dark house, all trace of humor or lightness disappears from the movie. We are back in Mann noir land. 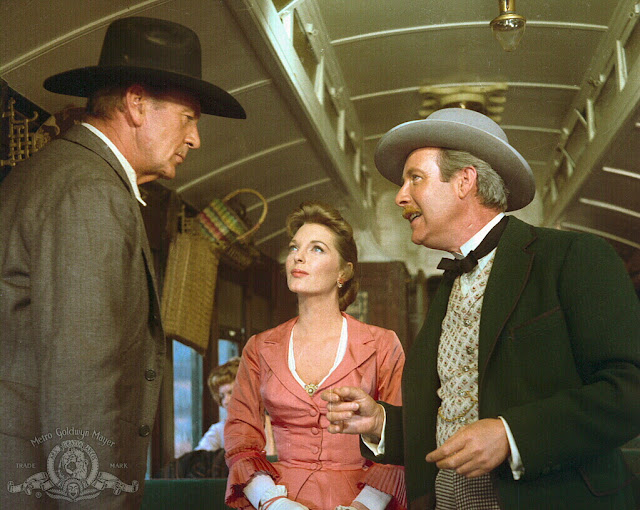 The bandits are led by Link’s uncle, Dock Tobin (Lee J Cobb). A priori this is a problem because Cobb could rarely resist chewing the scenery and he does that a bit here, hamming up the Bandit King role. But he manages (or Mann managed) to keep the worst excesses in check and he comes across as a once-powerful pirate, still venomous but now aging and declining in physical and mental powers.

His second in command is Claude, Dock’s nephew and Link’s cousin, played by the excellent John Dehner. This and his Pat Garrett in The Left-Handed Gun, which he did the same year, were probably Dehner's best Westerns (though his role in The Fastest Gun Alive ran them close). He went on to be a stalwart of TV Westerns and was in every series you can name. Here, he is intelligent, lethal, the de facto leader now that Dock is losing it and he’s cousin Link’s real adversary. And he has his own code of honor. Mann has him make the most noble speech in the film, when he describes his love for and loyalty to old man Tobin. He doesn't have the charm or charisma of other Mann villains but he does have a streak of the hero's nobility.


Another of the bandits, Coaley (Jack Lord) takes an especial dislike to Link and this climaxes in a (for those days) brutal fist fight, again typical of Mann, which, along with the scene where Coaley has forced Billie to strip off her clothes, gives a real toughness to the picture. It was one of the hardest, most uncompromising Westerns to date.

These characters were typical of Mann: an old man, a villain close in character and/or blood to the hero, a social outcast of a woman who shows noble spirit, and thuggish villains.

In all Mann Westerns the hero had a secret, or a past he wants to forget. But it is alluded too, hinted at, suggested. This time, Dock Tobin describes for the cast and for the audience Link's misdeeds, in detail. We see that Gary Cooper - Coop, of all people! - was indeed a man of the West but the bad West, an outlaw, a villain. He is stripped bare, and this parallels the literal forced undressing of the saloon girl. The two moments are equally shocking.


As always with Mann, landscape plays a vital part. In the first reel the train rolls through lush green scenery, a verdant and pastoral (i.e. civilized) land. Then, for the middle third of the picture, comes the dark and oppressive interior of the bandits' lair. Lastly, when they set off to rob a bank, they travel through what looks like a quarry: arid, rocky and barren terrain. There they find a ghost town. These locations match the phases of the film and the shift in the characters' actions and motivations. It was all shot (by Ernest Haller – three silents and three low-budget Westerns only to his credit), in California, though.


Link leaves Billie behind and goes in with deaf Royal Dano to case the joint for the bank heist. But the robbery is a bust. Dock has bungled and it’s only a ghost town. By then, however, the tensions in the gang have built and built, and a showdown is inevitable. The shoot-out, starting with the death of Dano, reminded me of the Stewart/McIntire one in The Far Country as they scrabble ignobly around in the dust. It's not the dramatic conflict among the noble crags that we got in Winchester '73 or The Naked Spur, though the final fight, when Link gets back to camp and finds that Dock has raped Billie, does hark back to those pictures. 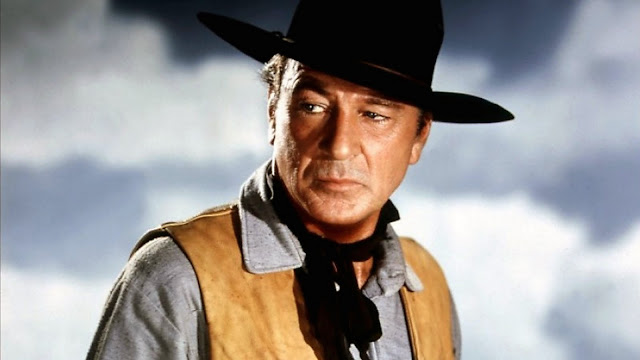 Maybe Man of the West was not the greatest Western ever. It certainly wasn’t Cooper’s – he was 56 by now and showing it a bit. But it is gritty, tough and Mannish. It was a lot better than the Westerns Stewart was then doing (Night Passage and later second-class John Ford). Jimmy must have rued his spat with Mann when he saw it.

The theme of impotent rage is supremely well handled. It’s a tragedy in three acts – the train, the farm and the ghost town – and Cooper was sublimely good at tragedy. He underacted to the point where fellow cast members thought he hadn’t done anything at all but when they saw the rushes they understood. With the slightest inflection of eye or turn of the face he could transmit every emotion. He was a superb screen actor.


Mann was fascinated by Cooper’s blue eyes. Of course such eyes shone out of Stewart’s face too. “It’s all in the eyes,” Mann said. “The heroes, all the stars that the public loves, have very light blue eyes or green eyes. … The eyes reflect the inner flame that animates the heroes. The guys with dark eyes play supporting roles or become character actors.” Certainly Cooper (and Stewart) could show every kind of emotion in the eyes and close-ups had great power.


Carl Foreman of High Noon hated Man of the West. “I thought it was appalling – one of the sickest films I’ve ever seen.” The noble Brian Garfield in his splendid guide to Western Films also did not care for it: “The picture has a sleazy flavor; it’s a distasteful story with mainly dislikeable characters.” I humbly disagree with both. For me Cooper is fine as a man seeking redemption, overcoming his past and his baser instincts, to retain, or regain, his integrity.


Mann’s final Western, two years after Man of the West, was the disappointing Cimarron, a soap-epic despite its starring the great Western actor Glenn Ford. In reality, Man of the West was the climax of his career. He directed eleven Westerns and with the possible exception of Cimarron (and even that had its points) there wasn’t a bad one among them. He stamped a personal style on the genre as Ford had and Peckinpah was to do.