One of the best 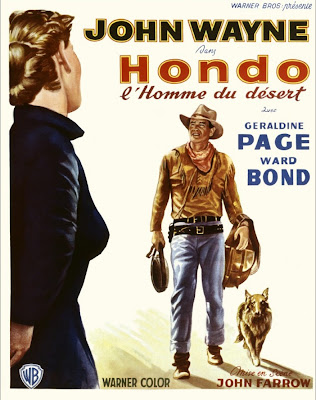 Hondo is a terrific Western. The opening is astonishingly Shane-like (Shane came out earlier the same year). A mysterious gunman who comes out of nowhere, arriving at a threatened farm where he is attracted to the farmer’s wife and bonds with the young son? Quite a coincidence, you must admit.

But in Hondo the stranger is stronger (it’s John Wayne, not Alan Ladd), there is no husband to get in the way (although we meet him later), the wife, Geraldine Page, is better than Jean Arthur in Shane (Page was justly nominated for an Oscar for it) and the little boy, Lee Aaker, is far grittier than the whiny kid in Shane (Brandon de Wilde). Shane never had a dog either. Hondo’s dog Sam, a mangy and more ferocious Lassie, is also great. Rumor hath it that Pal, the dog that played Sam, was the son of Lassie. Can this be true, do you think? As the Italians say, if it isn't true, it ought to be (se non è vero, è ben trovato).

Wayne is everything that Alan Ladd was not: tough, tall and powerful. It was a dress rehearsal for Ethan Edwards in The Searchers. He is absolutely superb and Hondo is right up there not far behind Red River and The Searchers, True Grit and The Shootist as his finest work. 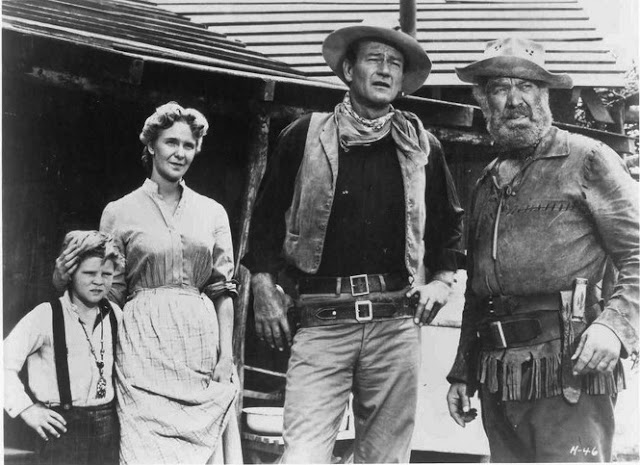 Hondo belongs to the new genre of those hard, adult Westerns of the early 50s. Hondo has a Winchester with an inscribed plate showing he has won it for marksmanship, a quotation all you Western fans will recognize and if you don’t, shame on you and you had better click here. It was Wayne’s first Western for three years and his riposte to the Anthony Mann/James Stewart tough-guy oaters.

It was an early Batjac production and spawned the Batjac syndicated TV series of 1969 with Ralph Taeger as Hondo Lane. Louis L’Amour was not yet a household name but this truly excellent story by the master contributed to the writer’s reputation. Hondo is still perhaps his finest novel. It’s the best L’Amour I’ve read, anyway. Wayne hired his favorite screenwriter and friend James Edward Grant to write the screenplay and a fine job he did. There is a chicken-and-egg debate as to whether L'Amour wrote the novel and then Grant adapted it for the movie, or if the book was a novelization of the movie. Both are probably true, in the sense that the 1952 L'Amour short story The Gift of Cochise, with its hero Ches Lane, Ed and Angie Lowe, and a Cochise very similar to the movie's Vittorio provided the basic plot, and L'Amour was later happy to publish 'the book of the film' as a novel closer to the motion picture.

Wayne was originally to have confined himself to producing, and Glenn Ford was to have been Hondo, which would have been interesting, but Glenn Ford and director John Farrow didn't get on at all and Ford turned it down, so Duke took over. Ford may have regretted the decision. After viewing the finished film at a private screening, Wayne jokingly said, "I'll be damned if I'm not the stuff men are made of!"

Farrow left the set early and John Ford, no less, directed the final battle scenes (which do have something in common with scenes in Stagecoach). Second unit director, who must have also played a big part in the action scenes, was Andrew McLaglen, part of the Ford/Wayne clan. Ford used Archie Stout to photograph it, so two photographers are credited, Stout and Robert Burks, who did very well with the Mexico/Utah locations. It was Archie Stout’s penultimate film in a long career.
Like the Mann/Stewart Westerns, it had a much more subtle treatment of Indians than previous Westerns. Hondo is half Indian himself, has lived with the Apache and responds to them and their code. Vittorio reciprocates and there is mutual respect. It’s very far from the Ethan/Scar relationship. Vittorio was played by Australian Michael Pate, outstandingly well. Pate, who had been a writer on the excellent Escape from Fort Bravo, went on to make quite a thing as an actor of playing American Indian chiefs. This was in the days before Hollywood cast American Indians as Indians. 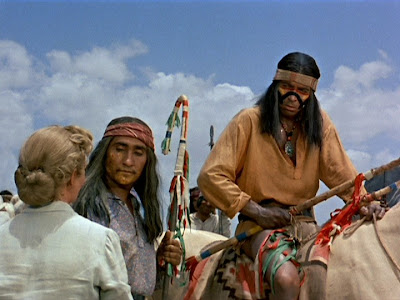 The film was laboriously made in 3D (which director John Farrow found difficult) but by the time it was finished 3D had faded from fashion and it has almost always been seen in 2D form. It works well in 2D, though, because the director, John Farrow,  did not go for the garish tricks of guns and knives lunging at the camera and jumping out at the audience, or at least not much. Only the lurid titles give it away. It would actually be fun to see it in 3D. 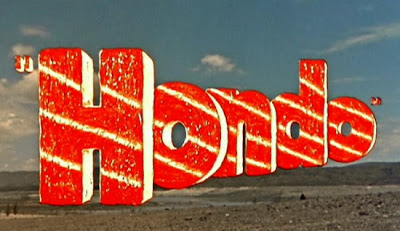 Support acting is excellent, notably Ward Bond as grizzled Indian scout Buffalo Baker, a perfect role for him (one of 23 films he made with Wayne), and another Wayne pal, James Arness (still blond) is an unsympathetic rival, even taller than Wayne. Paul Fix is a major. These people, many from the John Ford team, became the Batjac stock company.

The scene where Hondo teaches the little boy to swim is great. As you may imagine, he doesn’t teach him at all; he hurls the poor little mite into the river. There is a straight steal of this scene in the final reel of Yuma (1971) as the marshal throws the kid in the water and threatens that Julie will follow as she can’t swim either. Nay, let us not call it a steal; let's say it was an affectionate quotation.

It’s 1953 and so it was quite acceptable for Hondo to be the super-competent man about the place, protecting the woman and tutoring the child. He makes horse shoes, sharpens the axe, breaks a bronc and does heaven knows what else for the Poor Weak Woman in no time at all. Hondo Lane is the perfect Westerner, all-knowing, skilled, completely brave, laconic and tough. Ah, but he is also a poet and a sensitive lover and Mrs. Lowe is no feeble pushover. She’s a gutsy frontier woman.

It’s a fine Western coming from that very apogee of the genre, the mid-1950s. If watching the distinctly average 1973 Warners/Batjac Western The Train Robbers, Western buffs will maybe smile slightly at one thing. In it, Wayne is named Mr. Lane and Ann-Margret is called Mrs. Lowe.

Paramount have the rights to Hondo now and have issued it on a high-definition Blu Ray disc in the original widescreen aspect ratio. Must get that. In fact I may have to put Hondo in my Top Ten Westerns. Uh-oh, I’ll have to change it again. 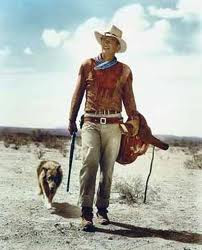