Many people would think that Stagecoach (UA, 1939) is the best film about a stagecoach. They’d be wrong. Stagecoach is a very famous Western and was hugely influential, being the first serious adult example of the genre in modern cinema. It also had a message, that society’s outcasts were the ones who did the real work, the brave ones. But it has considerable flaws. It has too many static studio settings, too much low comedy and the characters are too stereotypical. The 1966 remake was certainly no improvement.


The best stagecoach movie is in fact Hombre, a lesser-known picture of the late 1960s directed by no great Western master but by Martin Ritt, known for The Spy Who Came in from the Cold but for only one other Western, the theatrical The Outrage. Unless you count the excellent Hud as a Western that is, in which case he was more than qualified. Whatever his track record, though, he gave us in Hombre one of the best Westerns of the 60s. 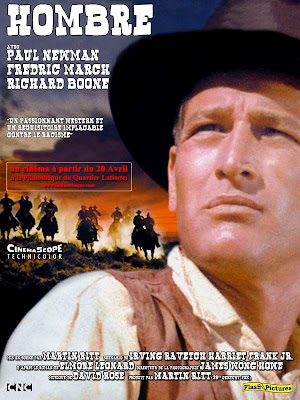 Of course he was helped by a stupendously good Elmore Leonard story, Hombre. This is Stagecoach with subtlety. This is Stage to Lordsburg but better. It is Maupassant’s  Boule de Suif in true Western key. Eight entirely different people are thrown together by circumstance and forced to confront harsh reality.


We have a green young boy (Peter Lazer) and his tarty new wife (Margaret Blye); there is crooked Indian agent Fredric March, magisterial and more convincing than the banker Berton Churchill in Stagecoach, and his rather sleazy wife (Barbara Rush). The stage driver is the sympathetic Mexican Martin Balsam (no hammed-up Andy Devine he). And the steely, stoic, alienated John Russell is superbly played by Paul Newman, white boy brought up by the Apaches and far more than half on their side. But the greatest of them all is Jessie, the woman Newman has in effect dispossessed, Diane Cilento, a Dallas with depth. She runs a boarding house inherited and then sold by Newman. She's a working woman in the West; what's she going to do now? It's tough. She's grittier and less ladylike than her boarding-house colleagues in True Grit or The Shootist, but she turns out to be the one with the most courage and decency of all the stage passengers. 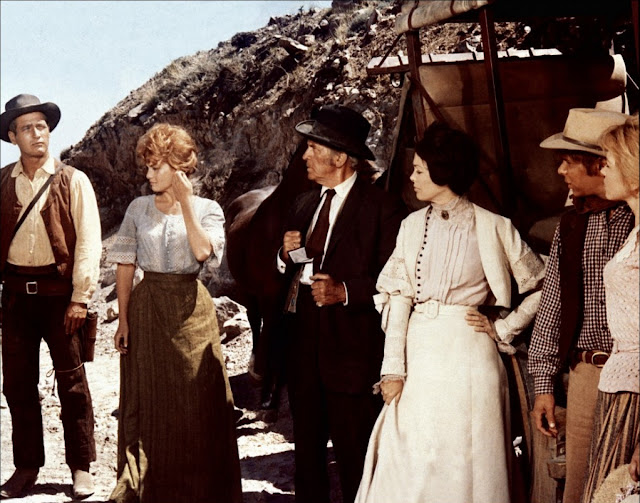 The sinister, charming, evil bad guy is the excellently named Cicero Grimes, played by Richard Boone in, I think, his finest ever role. In a sense he reprises his role from The Tall T a decade earlier, only better. Boone’s entrance is stunning – chilling and fear-inspiring. He is a true bully. As a result we fear him as the tension builds and his gang approaches. 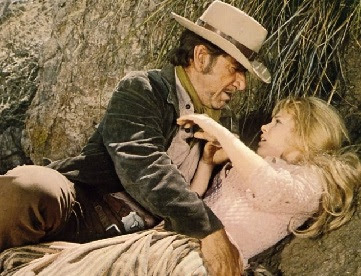 Hombre is a proper Western because it describes tough people in a lawless frontier situation and how they deal with adversity with varying degrees of courage and decency. The characters develop and play off each other. The Elmore Leonard story is outstandingly good (even if quite a lot is altered in this cinematic version).


When we see Newman in the opening shots we might be tempted to think, ‘Oh no, not another blue-eyed Indian like Burt in Apache’, but of course this is different because Newman plays a white boy captured by Indians and brought up in their ways. The character was modeled on one Jimmy (Santiago) McKinn, who is pictured in the final credits.


This is a fascinating story. In May 1885 on a farm in the Mimbres Valley of south-west New Mexico eleven-year-old Jimmy McKinn was kidnapped and his brother killed by Geronimo and a band of Apaches. The boy’s father, who had been away in Las Cruces at the time, gave chase upon his return and was relentless in his efforts. We think of films such as The Searchers or The Missing. But after finding his son’s coat with a bullet hole in the back, the poor man gave up and gradually descended into insanity.

In fact, however, the boy had been taken by Geronimo into Mexico where the band was pursued and eventually trapped by General Crook, and Santiago was among them. The party escaped but was later caught again, by forces under General Nelson A Miles. A reporter, Lummis, wrote   "When told that he was to be taken back to his father and mother, Santiago began boo-hooing with great vigor. He said in Apache—for the little rascal has already become quite fluent in that language—that he didn't want to go back—he wanted to always stay with the Indians. All sorts of rosy pictures of the delights of home were drawn, but he would have none of them, and acted like a young wild animal in a trap. When they lifted him into the wagon which was to take him to the [railroad] station, he renewed his wails, and was still at them as he disappeared from our view."


Later the reporter wrote, "Santiago McKinn, the 11-year old white boy, the Apaches' prisoner taken with Geronimo’s band, will be sent home tomorrow. It is learned that his parents were not killed, but reside at Hot Springs, at Hunter's, N.M., near the railroad from Deming to Silver City. During his half-year of captivity the lad had grown fully Indianized. He joins their sports, and will have nothing to do with the whites. He understands English and Spanish, but can hardly be induced to speak in either. He has learned the Apache language and talks it exclusively." 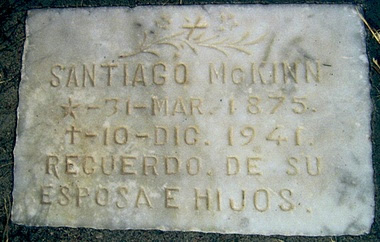 This is not what happens in the movie, however!
Boone and his excellent heavies hold up the stage and there is gunfire (I won’t say more). Russell/McKinn/Newman/Hombre leads the party across wild terrain, with the money, to escape the bandidos. He suddenly becomes the group's leader, no longer the despised outcast but the one who can save them if anyone can. He doesn’t appear to care much whether they are saved or not, and this gives his role great strength. This is by far Newman’s best Western and knocks spots of his hammy Billy the Kid in The Left-Handed Gun or his Judge Roy Bean or Buffalo Bill, all of which parts he overdid. In Butch Cassidy and the Sundance Kid he was a little more restrained and that was a pretty poor Western. No, Hombre was his peak. 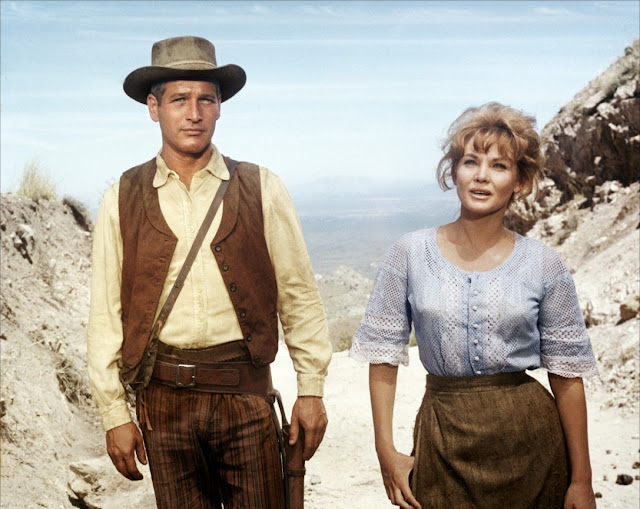 It becomes now not a stagecoach movie but a slow, inexorable chase story as the scary bandits close in on the motley group. I love Frank Silvera as heavy. He was actually from Jamaica but did sterling duty as a stock Mexican bandido in countless TV westerns and was later to be good as Diego in Valdez Is Coming, another fine Elmore Leonard-based Western.


Like Valdez, Hombre is a sensitive study of racial discrimination. To its credit, the Western genre did not always treat minorities badly (though it often did). There is a thread of movies that think about racism and have something important to say about it.  From Devil's Doorway and Broken Arrow in 1950 especially, films began to show the other side of the story. Think of Flaming Star (Fox, 1960), on the one hand a commercial Western with Elvis but on the other a challenging treatment of racial hatred.


Hombre is also finely photographed by James Wong Howe in sweeping Arizona locations. The panoramic high country is very beautiful and accentuates the isolation of the characters.

The gripping Irving Ravetch/Harriet Frank Jr. screenplay keeps the tension high right to the end: we really don't know what Russell is going to do.


Mr. Ritt was a master of intimate, exciting films with tension, ensemble pieces with a small cast, dark undertones and important messages. He was no John Ford or Howard Hawks but he was clearly influenced by Anthony Mann and for a taut little quality Western you won’t do much better. And when you think that this mini-masterpiece was released during the full junk spaghetti spate, you realize what proper American Westerns were all about.