It has its admirers

High Plains Drifter was the fourth Western that Clint Eastwood starred in after the Dollars European ones (if we exclude El Magnifico Extranjero, which was really a couple of Rawhide episodes cobbled together) and the first Western to be directed by him. 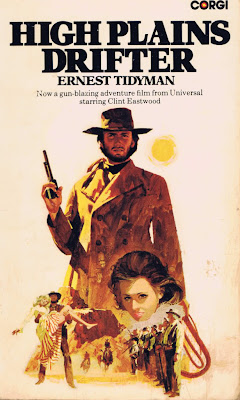 Although it came out the year after the very good Joe Kidd, it has much more a flavor of the Leone movies. It starts with a nameless stranger, billed as The Stranger, riding into a town to the sound of exaggerated over-dubbed clip-clopping, seeing a coffin-maker at work and then shooting three importunate thugs. Sound familiar? Yes, it’s Fistful all over again. Let’s call it a quotation.


We are supposed then to sympathize with this man raping a woman in a stable and have to watch a man being whipped to death twice, in flashback.


In fact everyone is bad in this movie. The baddies are just more bad. The ‘hero’ is no better; he just has super-human homicidal skills.


All the Italian western (small w) ingredients are there: there is pretty awful woo-woo music (Dee Barton). Every gunshot ricochets with absurd whining, Leone style. It’s a spaghetti. And just when we had watched Joe Kidd the year before and thought Clint was growing out of that! We are about to get up and leave the movie theater, regretting the admission price we have paid and wasted when, just in the nick of time, it gets better.


One of the main reasons for that is the stunning Bruce Surtees photography. I have said before that the late Bruce Surtees was one of the best ever cinematographers. He has such a talent, especially for the outdoors (where Westerns are best). This one was filmed at Mono Lake, California and in the Inyo National Forest – beautiful. Each shot is a work of art. His last Western was to be his masterpiece, another Eastwooder: Pale Rider.

The supporting acting is competent-to-good, especially from Verna Bloom, Mitchell Ryan and Billy Curtis as the put-upon midget who is promoted sheriff (a slight nod to Destry?)


There is now a slight surreal tinge to the plot as the stranger decides to paint the town red. We know the expression but he takes it literally. We are more interested.


Not for the first or last time as far as Eastwood Westerns go, there is a quasi-ghost-story aspect to the tale. The Stranger rides in on a pale horse and his name his death alright. He’s read Revelation 6:8, I think. When the man whipped to death in the flashback (Clint's stuntman Buddy van Horn) had appealed to the townspeople for help and was refused, he said “Damn you all to hell.” When he has had the town painted red, The Stranger crosses out the town’s name, Lago, on the sign board and rebaptizes it, yes, Hell. The symbolism is all that heavy-handed, I fear. Still, you get the message.

There is also a nod to High Noon as Stacey Bridges and his heavies are getting out of jail and the first stop on their revenge quest is Lago, the town they blame for their imprisonment. The Stranger’s aim is, however, as much to humiliate the townsfolk as to kill the bad guys. In fact he doesn’t care that much about the bad guys at all.


Variety said it was “a nervously-humorous, self-conscious near satire on the prototype Clint Eastwood formula of the avenging mysterious stranger” but in fact it isn’t, really. It was just Eastwood saying, “I can do Leone too.” Of course this doesn’t help much if you don’t rate Leone highly in the first place, like yours truly. Time Out thought it was “Eastwood's fond adieu to the worlds of Sergio Leone and Don Siegel; and indeed he cuts the operatic excess of the former with the punchy economy of the latter.” Again, I can’t agree. It’s really just an American spaghetti with a sauce of weirdness.

Two of the gravestones in the cemetery bear the name Sergio Leone and Don Siegel.

All in all I think it’s an unsatisfactory movie and nowhere near as good as Joe Kidd but it has its admirers and it is probably superior to the low-grade Siegel-directed Two Mules for Sister Sara of three years before. It made a lot at the box office. It’s interesting - even 'important' - as Eastwood’s Western directorial debut, and it’s visually good, as any Surtees Western is. So it gets two revolvers. But that's it.