I knew a fella once… 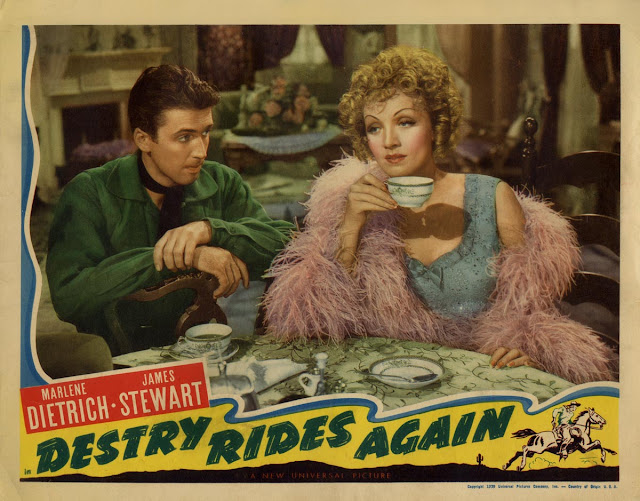 This celebrated film, very loosely based on the Max Brand novel Twelve Peers, was the first remake of the first Tom Mix talkie, which Universal made in 1932. There was another one with Audie Murphy in 1954, Destry, and Joel McCrea did a similar story in Frenchie in 1950. So the tale was well used. In the Tom Mix one, Tom Destry is out to avenge his slain father, in a sort of High Plains Drifter ante diem. In the famous version, though, this ’39 one, James Stewart, of all people, becomes Destry, folksy, milk-drinking son of a tough sheriff shot in the back, who decides to tame the wide-open town of Bottleneck with no guns.


Stewart became, of course, one of the great cowboy actors, notably with that series of 1950s Westerns directed by Anthony Mann, but at the time, 1939, he was a deliberately off-beat choice for lead. It is often said that Destry was his first Western. Well, he had been in a Westernish MacDonald/Eddy musical Rose-Marie in 1936 and also in a Civil War drama Of Human Hearts in 1938 but it is true that he had never starred in a ‘proper’ Western. He was most recognized as the innocent naïf Mr. Smith, honest, bumbling (but ultimately shrewd) out-of-towner. It was an inspired casting choice, especially as Mr. Smith Goes to Washington had been a box-office smash and made Stewart’s name. Stewart as Thomas Jefferson Destry (remember he had been Jefferson Smith), was on loan from MGM (the part was originally slated for Gary Cooper) and is sardonically fine, almost Capra-esque.

All through the 1930s Westerns had been rather juvenile affairs, and had been relegated to the status of one-hour second features, but as the decade ended studios realized that there was a new market for A-picture Westerns for grown-ups. In January 1939 Fox released a big-budget color Jesse James with their top star Tyrone Power (and Henry Fonda and Randolph Scott), and in February that year United Artists came out with  John Ford's Stagecoach. Warners put Errol Flynn and Olivia De Havilland in Dodge City (April) and Paramount had Joel McCrea and Barbara Stanwyck in the nation-building epic Union Pacific that month too. Universal wasn't going to miss that bus, and released Destry in November.


This new genre of adult Westerns required strong female leads and loads of love interest. In Destry, Marlene Dietrich, make-up applied with a trowel, is much more typecast than Stewart. She was known as, and is here a Blue Angel kind of dominant saloon gal, Frenchy, who wonders what the boys in the back room will have. And she is the definitive whore-with-a-heart-of-gold. Giving a woman the name of a town and/or making her foreign was code then for branding her a whore. (Stagecoach featured Dallas the same year) although why a Berliner should be called Frenchy is not entirely clear… But it seemed sexy and Dietrich had been living in Paris when she was contracted. She apparently said she would sleep with producer Joe Pasternak when Hitler was dead. This pay-later promise, pretty safe in 1939, became a bit awkward for Marlene in 1945. Actually, Dietrich was top of the bill, above Stewart. And at 40 she still had sex-appeal by the bucketload.


There was a scene in the movie showing Marlene stuffing her gambling winnings down her dress neckline. Patting her bosom, she exclaimed, "There's gold in them thar hills." After the preview audience roared at the line, the censors ordered it removed. Sigh. 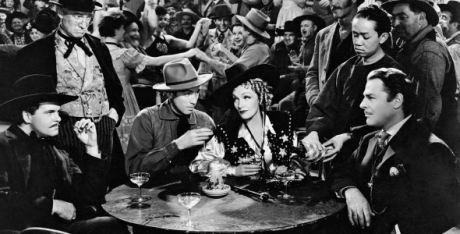 Many people adore this film. It was a smash hit (though completely ignored by awards). I have a couple of problems with it. For one, I never liked Marlene Dietrich (I know men aren’t supposed to say that) and to me she looks plug ugly in her costume and make-up here.


Good character actors give their support:


Brian Donlevy is terrific as the chief villain with appropriately caddish moustache. I was saying yesterday that Donlevy was pretty hopeless as a Westerner. He managed Quantrill in Audie’s Kansas Raiders OK, I guess, wasn't bad as the comulsive gambler in Canyon Passage, and I liked him as the saloon enforcer Knuckles in Barbary Coast, but was simply miscast as cow-puncher or gunman like Grat Dalton and he was the worst ever Trampas in the post-war The Virginian. Where he excelled was in this type of role: smiling bad guy in a suit. Preferably in a saloon. With a derringer. 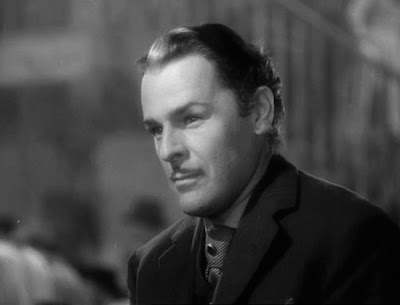 Charles Winninger is broadly comic yet almost moving as the reformed town drunk become sheriff. Samuel S Hinds is slimy-political as the rascally mayor and gawky Mischa Auer does a vaudeville hen-pecked Russian deputy. These are amusing, strong characters.


It was George Marshall’s masterpiece. Since the First World War he had been writing and directing Westerns (Across The Rio Grande, 1916) and into the 1920s. But he hadn’t done a Western since 1924 and never a talkie. The following year he did the actioner When the Daltons Rode and later of course he directed the wonderful The Sheepman in 1958 which we reviewed the other day. But really Destry was his high point. Actually, Marshall was unusual (though not unique) for remaking his own picture: he helmed the 1954 Destry too.


The movie was shot almost exclusively in the studio, so don’t expect an expansive Monument Valley Western or anything. It’s essentially an “in town” one. A lot of it is set in the saloon. Actually, it could have been a play. The saloon is grand and there’s plenty of smoke and gambling and there are fights, notably the daring duel between Dietrich and Una Merkel.


It’s a cop-out, too, because the potentially interesting theme of cleaning up a cow town with no guns had interest. However, Destry is finally obliged to strap on his daddy’s six-shooters and plug the villain. So the idea is proved to be unworkable. 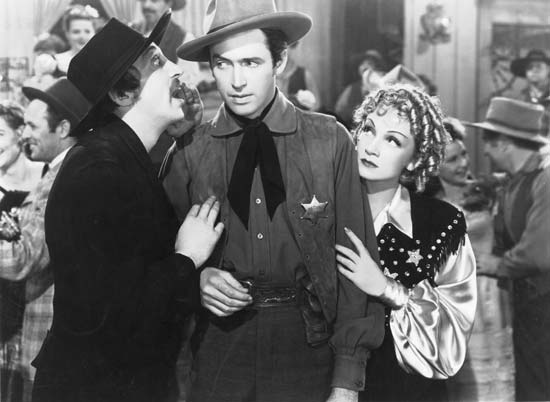 It’s a melodrama played for laughs and the crew clearly had great fun doing it. It brought sex to the Western (within the limits of the 1930s). There is a sort of chemistry about it, it’s Hollywood history, and it’s fun for an occasional watch. Was it just a spoof Blue Angel? Was it a Western? Was it a satire of Tom Mix Westerns of yore? (even the ‘Rides Again’ title had a mocking air about it). Well, yer pays yer money and yer takes yer choice.


The jokes (such as the one about the boy who killed his parents and asked for the clemency of the court on the grounds of being an orphan) were old even then.


But most people, and of all generations in fact, have a soft spot for Destry Rides Again. The humor is infectious and you can’t help smiling. And Stewart was simply magical.

I knew a fella once…