The third of the late-1950s Randolph Scott/Budd Boetticher Westerns wasn’t perhaps quite as good as Seven Men From Now or The Tall T but it’s still a tight little Western that gallops right along. 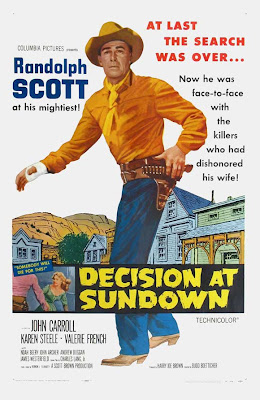 
It was not written by Burt Kennedy and perhaps that’s the reason it’s not absolutely top-notch. This one (along with the later Buchanan Rides Alone) had a screenplay by actor/TV writer Charles 'Froggy' Lang.


The plot is not dissimilar to that of Seven Men in that Scott is pursuing the man he holds responsible for the death of his wife, but the difference is that in this case he is wrong: his wife was not a virtuous woman unjustly killed but was a tramp who committed suicide.


It’s nearly all set in town called Sundown (a rather ‘Gunsmokey’ TV looking town) which has a slightly Hadleyville (High Noon) feel to it, though this time it's the bad man who marries that day. Boetticher wasn't at his best on the set of claustrophobic towns; he needed the great outdoors. Another reason why The Tall T was so much better. The town has been treed by John Carroll who must be a baddy because he has a pencil moustache and frilly shirt. The townsfolk are supine and lose their self-respect - until Randy and his sidekick Noah Beery Jr. get there, that is. He attends Carroll’s wedding to Karen Steele (rumored to be a companion of Boetticher) and when the preacher gets to the bit about just cause or impediment, he speaks up. He tells Karen that if she goes ahead with the wedding she’ll be a widow by sundown. Sundown is therefore both a time and a place. 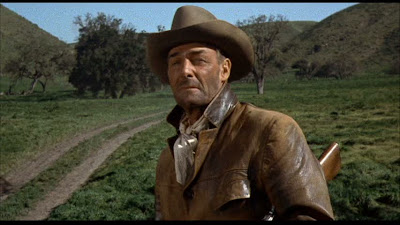 
Randy is as usual very fine. In this one his character is less sympathetic than other heroes. He comes across as blinded by hatred, rather as he was in '48 in Coroner Creek. There's nothing to soften his character. He doesn't help anyone really. In later scenes he is maudlin drunk. There's a hint that he's suicidal.

The siege in the barn slows down the action and doesn't seem too logical, plotwise.

Support acting is good: Vaughn Taylor (so often the townsman) as the bald barber who gets increasingly intoxicated as the day wears on, James Westerfield as Otis, the world-weary bar tender, and especially Valerie French as Ruby, the good-bad woman who really loves Carroll. Andrew Duggan (the lead villain in a later movie in this series, Westbound) plays the rascally sheriff.


As with all the Boetticher Westerns, the badman is quite a complex character and the moral distance between him and Scott is not so great. He has saving graces and we get the feeling that he changes as the day goes on.


Decision at Sundown was a second feature, like the others, and at 77 minutes it’s a tightly-plotted, economical picture (they were all shot in under three weeks) but it’s none the worse for that. 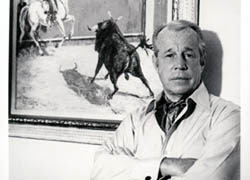 
It has corny Lone Ranger closing dialogue that I am sure Kennedy would never have permitted. Boetticher himself said that he didn't care for the picture. "It was already written, it was an old Randolph Scott picture." Boetticher was, though, often dismissive of these pictures, which were for the most part better than he thought (or said anyway).


Next in the series was Buchanan Rides Alone.