Indians as well as bad guys

The last of the Columbia ‘Ranown’ Westerns directed by Budd Boetticher and starring Randolph Scott was, like the others, very good indeed: adult, dark, tough. They were called Ranown for the production company set up by RANdolph Scott and Harry Joe BrOWN. On this one, Boetticher was also a co-producer. 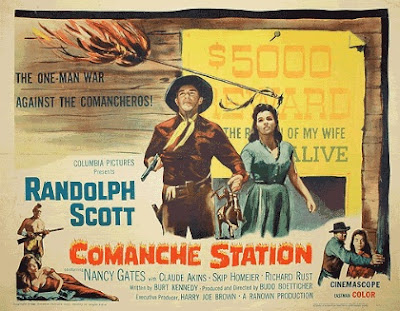 The very bright, even lurid titles over a shot of Scott riding (lonesome) through the rocks give us the by now standard opening. And indeed, by the end of the series there was a certain formulaic tinge to them. Burt Kennedy (who wrote this one too) even recycled some lines and scenes (for example, Claude Akins recites a ‘parable’ just as Lee Marvin did in the wagon in the first of the series). Once again we have a party of five in a dangerous situation, Scott, the heavies and a beautiful woman (this time Nancy Gates).


And once again we have a sympathetic badman who lusts after the dame and is talkative and charming. This time it’s Claude Akins (later to be imprisoned by John Wayne in Rio Bravo). The moral distance between Scott and Akins is small and closes, though in the end, as always, there is finally an unbridgeable gap.


Akins is supported by two basically good youngsters who, Kennedy tells us, have had no chance in life and drifted into the bad side, Richard Rust and Skip Homeier (the ‘badder’ badman Billy Jack in The Tall T).

One criticism of Budd Boetticher and Burt Kennedy (and they were not alone among directors and writers of Westerns in this) is that women in their pictures were usually just sex-objects to be drooled over by men and often not truly individuals. So it's a relief to have a fine actress like Ms. Gates, who plays a resourceful and intelligent woman who can hold her own on the frontier.

The whys and wherefores of the plot are once again revealed piece by piece and towards the end we learn why Scott is following the trail he is. He always has a Western name and this time he is ‘Jefferson Cody’. The character Randolph Scott plays in these seven Boetticher-directed movies are:
Seven Men: Ben Stride (monosyllabic, shows purpose as he determinedly reaches his goal)
The Tall T: Pat Brennan (cheerily Irish to match his character)
Decision at Sundown: Bart Allison (the most gunfightery of the names)
Buchanan Rides Alone: Tom Buchanan (he had no choice here because of the book)
Westbound: Capt. John Hayes (pretty staid, for the staidest of the movies and not a Ranown one)
Ride Lonesome: Ben Brigade (very similar to Ben Stride but with a military tinge)
Comanche Station: Jefferson Cody (how Western can you get?)
But in some ways, they are all the same guy.


Like its predecessor it was shot in CinemaScope and is visually, with Ride Lonesome, the most attractive of the series. This one was again photographed by Charles Lawton Jr. in good color (and the prints available now on DVD are excellent) up at Lone Pine in the eastern Sierra Nevada. Boetticher certainly had an eye for landscape and framed shots.


The ending (which I shall not reveal) is strong and memorable and explains a lot.

Shot in eighteen days and brought in on the usual tight budget, this movie, like the others, was workmanlike and sound but Boetticher was an over-achiever. The films were far better quality than the shooting schedules and budgets warranted.


Maybe not the very best of the series, Comanche Station is nevertheless high quality and a fitting conclusion to an excellent cycle. Apart from Ride the High Country in 1962, when he was persuaded by Sam Peckinpah to make what became his last film, it was Randolph Scott’s last Western. He was 62 when it was released so probably felt entitled to hang up his .45. Scott always came over as a tough but decent Westerner, tall (and straight) in the saddle and following that Western code of honor. He was in some pretty average Westerns and the very rare clunker but he was usually superb, and never better than in this fine series of small second-features produced by his company and directed by action man Budd Boetticher.

Columbia after the demise of Harry Cohn was less and less interested in the Western. Other studios were also having their doubts. Comanche Station was the last of the 50s Western movies really, and the 60s produced far fewer. The sixgun became a TV specialty, not one for theaters. 1960 was also the year of The Magnificent Seven and when the 60s did produce Westerns, they were very different, brasher, more violent, more commercial. And then, dread day, in the mid- to late-60s we entered the era of the junk spaghetti western, to which I will not even give a capital W. There were notable exceptions, of course, in particular the pictures directed by Sam Peckinpah, and some more recent Westerns have been extremely good, but really with the departure of the 1950s, the real glory days of the Western had pretty well reached the end of the trail once Budd Boetticher had stopped directing Randolph Scott.


There’s quite an interesting ten-minute documentary by Matt Zoller Seitz on this series of Boetticher/Scott Westerns you can watch on YouTube (external link). It contains some rather pretentious commentary about the movies being like Samuel Beckett and such but is interesting and worth a watch.