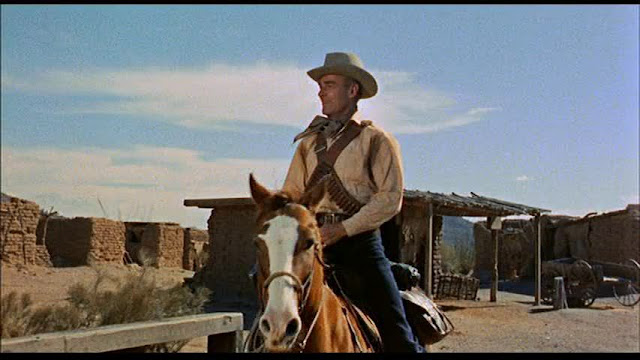 The fifth of the Budd Boetticher/Randolph Scott movies produced by Scott together with Harry Joe Brown (after Seven Men From Now, Ride Lonesome, The Tall T and Decision at Sundown) was, like its predecessor, written by Charles Lang (who was not quite up to Burt Kennedy ’s level) and shares many of the same qualities.

Having said that, it seems that Boetticher rewrote extensively, aided by Kennedy. Boetticher said:

Charlie Lang was the screenwriter, and one of my best friends. He was known as Froggy Lang. He was getting a divorce at the time, and he was drinking ... I read [the script] and it was awful. We couldn't shoot a god-damned thing. I called Burt and said, 'Come to Tucson. We're gonna make a piece of shit if you don't get over here'.

Much of the writing was apparently improvised day-to-day on the set.

Scott rides in, this time to a border town 'owned' by corrupt brothers, and he rights wrongs before riding out again. (Sergio Leone must have seen these movies). This time he is not a deeply scarred man out for revenge, as he usually was in these Brown/Boetticher/Scott Westerns, but a happy-go-lucky drifter returning from mercenary work in Mexico.

The Buchanan series of novels by ‘Jonas Ward’ (William Ard and later writers licensed by his estate) featured a very tongue-in-cheek character and Scott therefore goes for a rather lighter interpretation than in previous episodes – although he still gets tough when the going does. 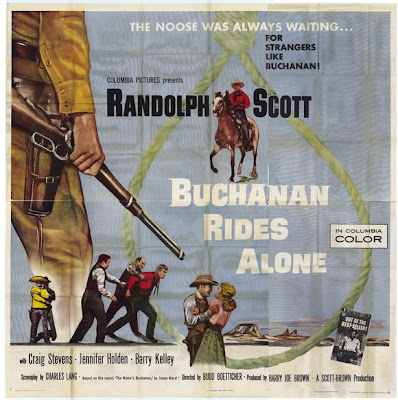 Once again there is a sympathetic bad man, intelligent, charming, good with women, that you feel Boetticher himself identified with - this time especially so because Craig Stevens is all decked out in black and looks like a cross between a gunfighter and a matador. He and Scott develop a mutual respect, even if they are on opposite sides of the good/bad divide.


Film maker and critic Taylor Hackford has said that these are “Not just action movies; they are thinking Westerns.” Buchanan is, like all of them, short, economical, fast-paced and tightly directed. The pictures are exciting actioners but the actors are strong and the characters develop.
Sheriffs are usually corrupt or sadistic. This one (Barry Kelley) is both. A young LQ Jones plays Pecos, a sympathetic heavy. This time the woman, Jennifer Holden, has a much lower-key part and is by no means central to the action (there is usually a fancy leading lady and a counter-balancing whore-with-a-heart-of-gold or at least a racier dame). 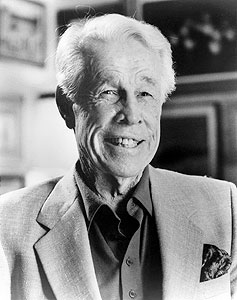 
Bizarrely, the only one of the films to be set in California was the only one not filmed in California. This one was done at Old Tucson and has a much more adobe and saguaro look to it than the others. It’s nicely shot in good color by Lucien Ballard, no less, but there are few outdoor scenes. Most of the action happens in town. Or even in jail. Boetticher was at his best with the great outdoors, especially up at Lone Pine. Boetticher himself described Buchanan as "one of the lesser films" of the series. It didn't make serious money in the US, despite its minimal budget of under $350,000, though it did quite well in Europe.


But it's good, another crafted short Western, definitely worth a watch.

The next in the series was Westbound.