The Man from Laramie was the last, best and most stirring of the long series of Westerns in which Anthony Mann directed James Stewart.

Mann said, "I wanted to recapitulate somehow my five years of collaboration with Jimmy Stewart: that work distilled our relationship."
Stewart is indeed superb in this movie as plain-clothes soldier Will Lockhart – good name. Driven, angry, determined, if less manic and borderline-psychotic than in The Naked Spur, he is dynamic and powerful. And more of the classic Western hero. As we discover gradually, he’s after the gun-runners responsible for the death of his brother. He travels down from Laramie (Fort Laramie, it turns out) with a wagonload of supplies for a storekeeper (Cathy O’Donnell) and then hangs around town, digging up clues. 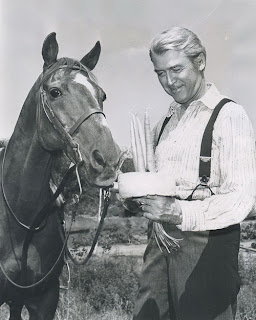 Stewart was such a good Western hero and we got to know him well. In this movie, there’s that sweat-stained old hat again (he only abandoned it for Shenandoah and that movie was a dud, so there must be a connection, obviously). There’s the sorrel Pie which he rides so well. In fact Pie appears in several Stewart Westerns and even gets a mention in The Far Country (where he wears a little bell on the saddle horn). Pie was a beautiful horse, intelligent, perky and adorable. In fact the nag didn’t belong to Stewart at all but the relationship was so close that Anthony Mann, said, “I swear the horse looks back at him and smiles.” Henry Fonda, a talented amateur artist, did a water color of Pie, treasured by Stewart, on the set of The Cheyenne Social Club, just before Pie died.

Stewart as Western hero managed to combine the authenticity and toughness of, say, John Wayne combined with a certain vulnerability which Wayne didn’t have. “Maybe what it is,” declared Stewart, “is that people identify with me, but dream of being John Wayne.” Stewart is stunning in this film.
Stewart always regarded Laramie as his best Western and it made him Hollywood’s biggest property of the time. We understand why.

The movie is beautifully shot (far from Wyoming; Laramie is only in the title) round Santa Fe and up at Taos by Charles Lang, who chose early evening in many scenes to capture that gorgeous New Mexico light and those long shadows. See it on the big screen in CinemaScope if you can - it was the only one of the series to use CinemaScope, which it is perfect for widening the space, and thus the isolation of the character in it.
The music (George Duning) is good, too. Even the title song by Lester Lee and Ned Washington, which could have been cheesily warbled by some crooner is understated, and the orchestral score is excellent. Mind, the words of the song are stupid. All that "so many notches on his gun" business. And as for having "a flair for ladies", he kind of drops Ms. O'Donnell flat to ride off into the sunset. Still, I found the song exciting as a small boy, I remember.
The fight scene where Nichol and Stewart slug it out in the dust, rolling among the cattle, is as violent as anything in The Naked Spur. The scene where the badmen deliberately hold out Stewart’s hand so that cowardly Alex Nicol can fire a bullet through it, though tame by Wild Bunch standards, was perhaps the most brutal scene in a Western to date, and filling the CinemaScope screen in close-up as it does, it has huge impact. Yet Mann cleverly did it without showing the actual gunshot; it was rendered by a sound-effect off and by showing Stewart’s reaction.
There are weaknesses to the film. Unfortunately, unlike in the Universal pictures where Stewart is usually very well supported, here the other actors are weaker. In particular, Alex Nicol overacts desperately as the spoilt, violent son and Donald Crisp as the rancher is plodding (he was never good in Westerns), as is, this time, Arthur Kennedy as the villain. Neither Nichol nor Kennedy is really an anti-Stewart, as the villains are in the other Mann Westerns. Crisp’s diction is far too Eastern and he can’t make an ain’t sound convincing at all. It's a pity he is so weak because the father-figure is central to the drama and tragedy. Aline MacMahon is matriarchally good as the elderly ex-fiancée and rival to Crisp, and is an unusually strong female character for Mann (in these Stewart Westerns anyway; he had two very strong women in his first two essays in the genre). However, Cathy O’Donnell is really only decorative and domestic as the young girl, and rather too posh. Jack Elam is in it (briefly) so that's good. Probably the best supporting actor is Wallace Ford as Charley, Stewart’s grizzled old half-Apache sidekick. 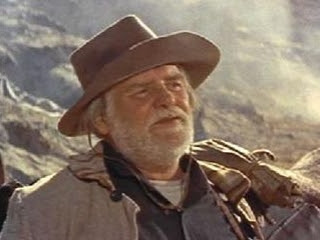 The movie has even been described as a Western version of King Lear. Well now, I think we are getting a bit hi-falutin’ here. This is a cowboy movie, for goodness sake. I’ve heard The Searchers described as Shakespearean (I might have been guilty of using the adjective myself, in fact) and the HBO Deadwood too. But Laramie as  King Lear? No, I don’t think so. And anyway, who is supposed to be Lear and who the daughters? I suppose it must be Crisp and his 'sons'. He does go blind anyway. Well, it is true that Mann was very interested in Lear, has Learish references here and there in his films and dreamed of making the Shakespeare play into a movie.
Anyway, I prefer to think of it as a classic example of the Western story of a Shane-style tough stranger who comes out of nowhere, rights wrongs and rides off into the sunset. This is a powerful, gripping Western drama which puts Stewart right up with Cooper, Wayne, Fonda, Lancaster, Eastwood and the others on the Western Mount Olympus, which is probably somewhere up there in the Sangre de Cristo mountains of New Mexico - or maybe in Wyoming. 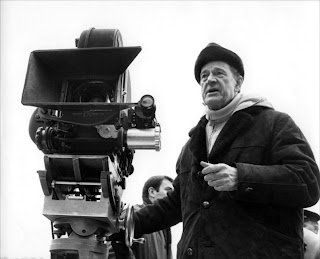 Significantly, when Lockhart finally corners the gun-runner ("I came a thousand miles to kill you," he says), he can't actually pull the trigger. He lets the Indians do the dirty work. In the last resort, he is the classic Western hero.

Anthony Mann (left, don't you think he looks like Jacques Chirac?) was one of the very best Western directors.  Of all his eleven oaters (it depends on your definition of a Western but people usually say eleven) it is arguable that The Man from Laramie is the very best.