20th Century Fox certainly milked their Jesse James franchise. In 1957 they brought out another big-budget A-Western, The True Story of Jesse James, starring Robert Wagner. They had bought the rights from the James family (and therefore had to be careful not to show Frank making off with Gene Tierney in the 1940 one, although it didn’t stop them playing fast and loose with the facts). In this 1957 version they stuck a little more closely to the truth, although pictures called The True Story of such and such do rather leave themselves open to criticism when they adapt history for cinematic purposes.  Why on earth do they do it? I guess some audiences are attracted by the idea that they are going to see “history” but quite honestly, to go to a movie theater to see a Western in order to study nineteenth century American history isn’t too bright.


The opening announcement will give you an idea of the film’s historicity (is that the word?):


The tragic War Between the States spawned much that was good, much that was evil. No person better symbolized that curious mixture than a quiet Missourian farm boy (sic) named Jesse James who became America’s most notorious outlaw. Much that you will see here is fact and much is as close to what actually happened as any man can testify.


What they meant was “as close to what actually happened as this studio can or wants to get away with.” 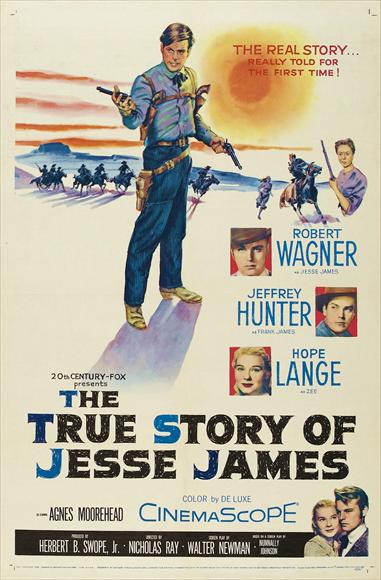 At one point dear, saintly Ma James (Agnes Moorehead), who is correctly billed as Mrs. Samuel – in some films she grows an s and becomes Mrs. Samuels for some reason - says of Jesse, “He’s a good boy. The Yankees drove him to it.” He’s kind to animals too. There is no black ‘servant’ Pinkie this time and the claim “We never owned a slave” is plain fraudulent, as is the statement “Jesse was carrying a white flag. We weren’t even armed.” Yet this is The True Story of Jesse James, remember?


esse (Robert Wagner) goes a bit crazy. Frank is the calm, decent one.
Frank (Jeffrey Hunter): You really like killing.
Jesse: You’ve done your share. I’m not ashamed.
Frank: Well, I am.


One accurate part was that when they hold up the train, they just go for the express car and don’t rob the passengers. In reality only twice did the James gang rob passengers. Most of the time they contented themselves with the contents of the safe or strongbox.


The brilliant and talented Nicholas Ray was chosen to direct but unfortunately Fox forced all sorts of cuts and edits on his work, notably the corny flash-backs with smoke and blurring, just in case audiences were too dumb to follow the story without.  The look of the film is very 1950s and Wagner, imposed by the studio on Ray (he wanted Elvis), was too glamorous and blond and coiffed and Alan Laddish for the part (although Hunter as Frank is quite good considering Henry Fonda was such a hard act to follow).


Walter Newman reworked the original Nunnally Johnson screenplay and several stunt sequences from the earlier movie were used, including the James boys crashing through a store window, ‘Jesse’ jumping from a horse onto a train and the infamous and cruel leap by a horse into the river. This story starts in Northfield. And the January 1875 fire-bombing of the Missouri home comes after the September 1876 raid. Who cares, it’s only history.


The photography, very good, was by Joe MacDonald this time, but without those lush green Missouri locations – it was shot up at the Fox ranch in Malibu Creek - probably cheaper. The original music is by Leigh Harline and more dramatic than 1939 when it was, shall we say, martial.


An odd element is that the name ‘Major Rufus Cobb’ has been retained but for a totally different part. He is no longer Henry Hull, the dogmatic newspaper editor but seems to be Zee’s Pa or guardian, a skinflint, played by Frank Overton. Strange. 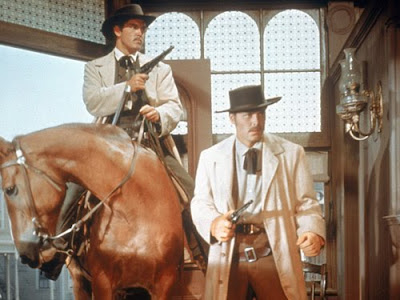 One nice touch is that John Carradine, the original Bob Ford, gets to play an elderly preacher. The Fords are well acted, especially Carl Thayler as ‘Robby’ Ford, and the final sequence, where the assassins rush out and boast after shooting Jesse, is very good. I also liked Alan Hale as Cole Younger (the other outlaws are much more delineated this time). On the other hand, Frank Overton as the Major and Alan Baxter as Remington are pale imitations of Hull and J Edward Bromberg respectively.


Frank and Ma are in the St Joseph house at the time of the shooting and help Zee. Oh yes, this is the True Story alright. 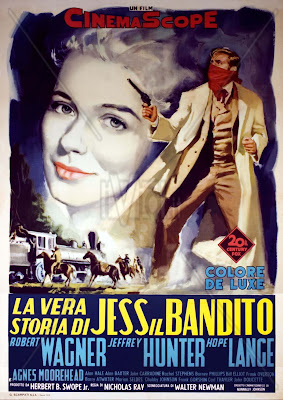 There’s a blind ballad singer who wastes no time at all, singing his completed version of the Ballad of Jesse James about 20 seconds after Jesse has been shot.


This movie is OK, don’t get me wrong, and worth watching. Like its Fox predecessors, it gallops along, although perhaps with less brio. But wouldn’t it be great if Fox found Ray’s original cut in its vaults and released it!
***


The last 50s Jesse epic was that of the mighty Bob Hope in 1959, Alias Jesse James. I do love Bob Hope Westerns (especially The Paleface and Son of Paleface). In this one the first quarter of an hour shows us Milton Farnsworth (Bob) in NYC as a spectacularly unsuccessful life insurance salesman who sells a policy to Jesse James. Milton’s boss Titus Queasley (Will Enright), furious, sends Milton out West to protect Jesse, so that no claim may be made on the policy.
“But Mr. Queasley, I’m liable to get killed!”
“Stop trying to cheer me up.” 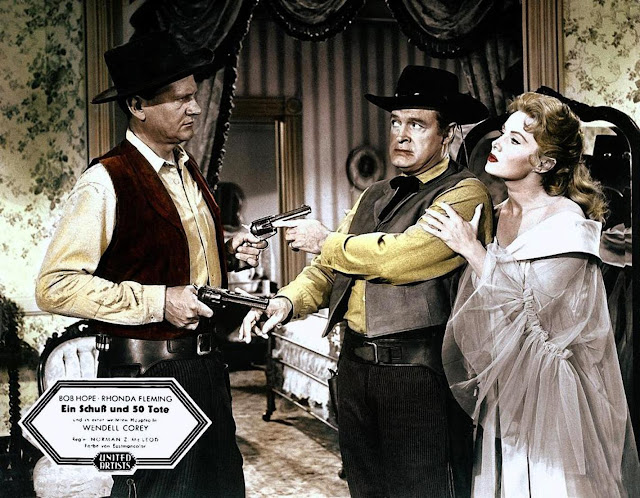 On the train West, footage from the hold-up scene looks suspiciously like the one in Fox’s movie as a stuntman runs along the top of the train…


Jesse is played as a two-gun womanizing rogue by Wendell Corey (nearer 50 than 30 but never mind) who has the town in his pocket. His dame is la belle Rhonda Fleming but she takes a shine for Milton…

There's a great part where Bob walks through a shop window in reference to the stunt that appeared in most Jesse movies where the gang ride through one.


I liked Ma James (Mary Young). She looks like a sweet little old granny but cleans the guns and shoots straight too. She reminds me of Zeffie Tilbury in Sheriff of Tombstone.

Ma James: It’s important to keep a gun clean.
Milton Farnsworth: Oh I know. A guy can get blood poisoning from being killed by a dirty bullet.


There’s the obligatory grim song by Rhonda (she was beautiful and a good actress but...) though it does improve when Bob joins in, but all in all it’s amusing and enjoyable.


The last ten minutes of the movie are fabulous. A whole host of great Western stars were featured briefly (though sadly some of their scenes were later deleted because of questions of the rights): Gene Autry, James Garner as Brett Maverick, James Arness as Matt Dillon, Hugh O’Brian as Wyatt Earp (with Buntline Special), Fess Parker as Davy Crockett complete with coonskin hat, Roy Rogers in a fancy shirt, Ward Bond (“Well, better get back to the wagon”), stern Iron Eyes Cody (Bob tries to sell him insurance on the train), Scatman Crothers as the railroad porter, Gail Davis as Annie Oakley (even more flashily dressed than Roy), Bing of course, Jay Silverheels as Tonto with a wonderful line (though the Lone Ranger is nowhere to be seen) and, reverent hush, please: Gary Cooper as the sheriff, who has one word to say. It is, of course, “Yup.”


This Western is a Western-lovers’ Western.


Unless you feel comedy Westerns to be slightly sacrilegious. 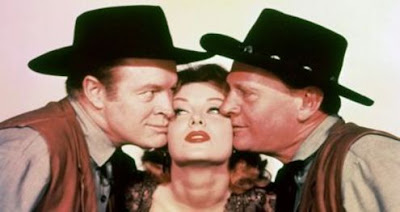