The early 1950s gave us quite a few Jesse Jameses.

1.    Kansas Raiders (Universal, 1950) directed by Ray Enright with Jesse played by Audie Murphy. We have reviewed this already, so click the link for more on Audie as Jesse. 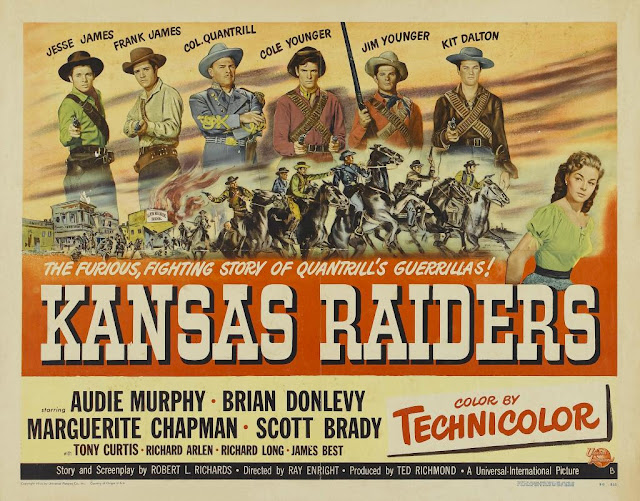 In Kansas Raiders, Jesse (Audie Murphy) is a decent boy shocked by the brutalities of Quantrill’s band. He leaves Missouri to join Quantrill in Kansas because Redlegs have burnt his farm, hung his Pappy and maimed his Ma in a fire-bombing. He’s a goodie Jesse just as he was a goodie Billy the Kid in The Kid from Texas.


So he can’t take the slaughter meted out by the band and shoots Bloody Bill Anderson dead during the sack of Lawrence when Anderson wants to hang a Union captive. Of course Jesse was not at Lawrence and did not shoot Anderson but poetic license, you know. In the end, however, he is the only one to stand by Quantrill (played as a cruel megalomaniac by an excellent Brian Donlevy), who dies gloriously sacrificing himself to save Jesse and his minions: brother Frank (Richard Long), two Youngers (James Best and Dewey Martin) and a junior Dalton (Tony Curtis). 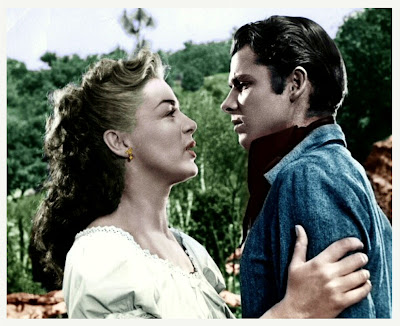 The whole thing is another travesty. The movie has its points (for example, the Irving Glassburg Technicolor cinematography) but all in all, Kansas Raiders is a bit of a clunker.  Still, a least it deals with the Civil War, an aspect usually glossed over by Jesse James movies (too difficult to present that part in a good light, perhaps) and for its time it was quite brutal. It’s not a children’s programmer. And at least it shows the James gang as adolescents, which they were. The actors were in fact in their twenties, whereas the historical gang members were younger (in 1864 Frank was 21, Jesse 17, Cole Younger 20, Jim Younger 16) but the actors do a good job of being green juveniles.


In reality, Jesse joined his already veteran brother Frank in the Confederate struggle at the age of sixteen and ‘distinguished’ himself by his brutality. He participated in the Centralia massacre, when 24 unarmed soldiers on furlough were taken off a train, lined up and shot down, then mutilated, and in the following battle. Frank and Jesse claimed that in that battle Jesse himself had shot and killed Ave Johnston, the Union commander. There is no written record that proves that Jesse and Frank participated in the subsequent murder, cutting off ears and scalping of prisoners but it seems unlikely that they did not. They were leading members of Bloody Bill Anderson’s gruesome band, members of which murdered prisoners, shot civilians in the head on a whim and decorated their bridles with scalps.

Of course, horrors of this kind (including scalping) were committed by both sides. There was “a culture of atrocity” as TJ Stiles calls it in this very nasty war. It was small-scale - guerrilla skirmishes, farm-burnings and casual lynching rather than large set-piece battles. It was personal and vicious. The enemy were men of their own state, traitors who deserved the worst fate. Many of the participants were teenagers. The weapons of choice were revolving pistols and scalping knives. It is no wonder that most films, the ones which wanted to portray Jesse James as a hero, quietly avoided dealing with the Civil War episodes altogether.


All Jesse James movies have played fast and loose with history and any resemblance of the stories of those films to actual fact was purely coincidental and deeply regretted by the studios. Well, that’s fair enough. You don’t watch cowboy films to get an accurate portrayal of American history. In fact the latest movie, the Brad Pitt one, was much guided by the Ron Hansen book (more of which in a later post) and so is the most historical film Jesse we have ever had.
I’m afraid I haven’t seen The Great Missouri Raid of ’51 or (suspiciously similar in title) The Great Jesse James Raid of ‘53. Maybe you have. If I get to watch them at some point I’ll tell you all about them. I understand the former to be not too bad. Gordon Douglas did some pretty average pictures but some quite good ones too. Ward Bond is in it. Ray Rennahan photographed it and Paul Sawtell did the music. So it can't have been junk. I’ll let you know. 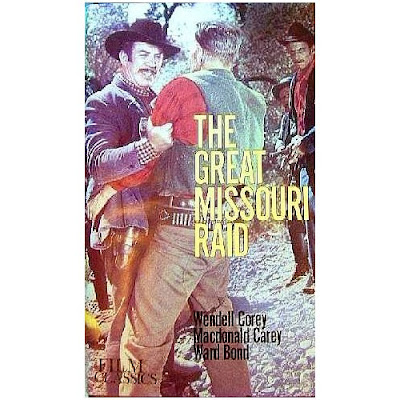 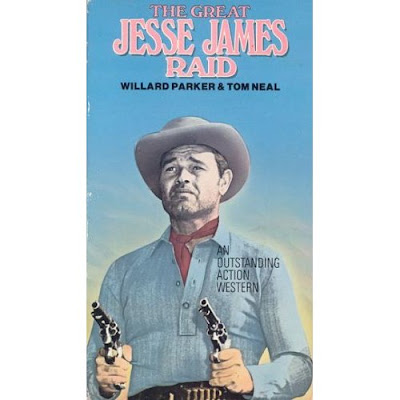 The latter is said to be much weaker as a movie, however. The long review on TCM shows that historically it is the usual farrago of rubbish.  Rotten Tomatoes is a bit politer about it and says, “Within its own modest limits, The Great Jesse James Raid is a well-crafted western.” Again, if I see it I’ll let you know who was right…


Jesse James’ Women is junk. It’s ‘romance’ over action and such action as there is is dismally staged. Perhaps Don ‘Red’ Barry, who directed, co-wrote, co-produced and starred in it, wanted to cash in on his Jesse done with Roy Rogers in 1939. Jack Buetel (the wooden Billy the Kid from The Outlaw) is Frank. Forget it. 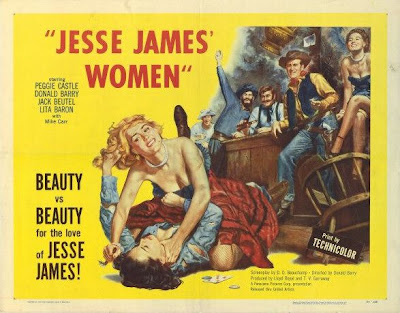 Jesse James vs. the Daltons is a bit better than Jesse James’ Women but not that much. Strictly, it’s not a Jesse film at all because it’s about his son, not the real son Jesse E James but an illegitimate son sired in Kansas when Jesse was marauding with Bloody Bill. Played in a remarkably bland and insipid fashion by Brett King, a TV bit-part actor, we don’t frankly care much what happens to this ‘hero’.  He joins the Daltons because he has heard that they are searching for some loot hidden by Jesse in the war. Or something. I can't remember. 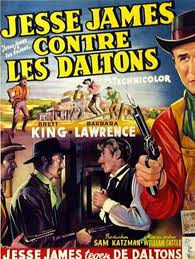 William Castle directed 11 Westerns, all B movies except perhaps The Americano (RKO, 1955) which is pretty well the only bad (semi) Western Glenn Ford was ever in. That was quite an achievement for Mr. Castle.


There’s some nonsense about Jesse not being shot by Bob Ford at all. It was all a cover-up to throw the Pinkertons off. Of course there are people who believe this. There are people who will believe anything. Like for example that the world is going to end on 21st December 2012. (I write this on 22nd).


It’s in 3D so we have lots of special stunts as people lunge towards the camera and so on. But honestly, don’t bother with this movie either.


Instead, tomorrow, let’s move on to the ‘big’ Jesse picture of the 1950s, Fox’s updated version of their 1939 hit, this time titled The True Story of Jesse James, and then we'll finish off the 50s with a mighty 1959 epic – starring every cowboy under the sun…