Roy Rogers was in two Republic pictures about Jesse James, Days of Jesse James (1939) and Jesse James At Bay (1941), both directed by Joseph Kane. They are 53 minute black and white progammers with no pretensions whatever but great fun.


Kane was Republic’s go-to Western director (116 cowboy flicks), working a lot with Rogers, Wayne and Autry, and must be the only movie director to have first been a professional cellist.

What I like about these pictures is their honesty. On the title screen of both we get the plain declaration:


The characters and events depicted in this motion picture are fictional and similarity to actual persons, living or dead, is purely coincidental.


There you are, you can’t say plainer than that. Would that more Westerns had been so straightforward rather than going for the ‘This is how it really happened’ line (and lie).


Actually, though, there may have been good legal reasons because 20th Century Fox had done a deal with the James family and jealously guarded their rights. 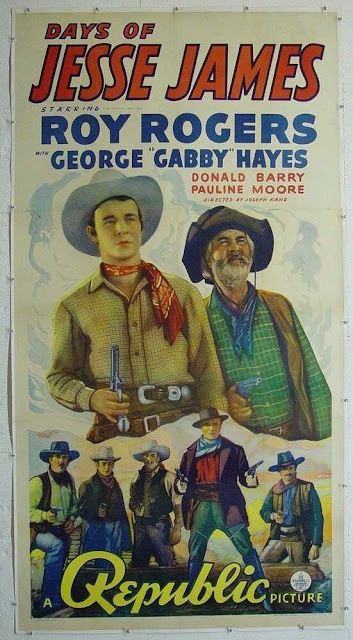 In Days of Jesse James, Roy Rogers is not Jesse. He is Roy Rogers, a “peace officer” sent to investigate the James robberies but harboring a sneaking regard for Jesse. Jesse himself is played by Don ‘Red’ Barry: Texan, college football star, Barry became ‘Red Ryder’ for Republic. Apparently he was feisty and combative (and short) but he made a lot of cowboy pictures in the 1940s. Sadly, his career declined and he was forced into low-budget work for Lippert, then nothing, before shooting himself in 1980. Here he is a rather dashing Jesse with twin tied-down Colts in side holsters. Frank (Harry Worth) is suave. Gabby Hayes is a miner returning from California with $40,000 who gets involved with Roy in the detecting business when it’s stolen. Pauline Moore is his granddaughter for Roy to sing to and make eyes at. There’s a dog.


The villains are Captain Worthington (Harry Woods), a crooked railroad detective, and a banker, Wyatt (Arthur Loft) who is equally crooked. Obviously. All railroad men and bankers were crooks. As you may imagine, however, they get their come-uppance at the hands of our hero Roy, ably assisted by Trigger.


Cole Younger (Glenn Strange the Great) has a very dashing mustache and the sheriff (Fred Burns) is rather tall and distinguished. Mrs. Samuels (Ma James)and her doctor husband, Jesse’s mother and stepfather, are rather posh and there’s Buster, their son, Jesse’s young half-brother. Buster and Mrs. Samuels are hurt but not killed because Roy saves them when Capt. Worthington, the cad, firebombs the ranch. Of course the railroad is the problem. Jesse and Frank are only robbing trains to get back at the evil railroad. When Jesse brings home the loot to Ma, he says it’s “a little donation from the railroad company [for a local farmer], kinda makes up for the way they cheated him out of that right-of-way.” This is a standard excuse for James’s depredations in movies and gets Jesse off the moral hook for robbing.


Jesse James At Bay is very similar. However, this time Roy is Jesse (though he still rides Trigger). The old timer Gabby has now become the sheriff. There’s no sign of Frank in this one but Jesse is still marauding. There’s the old double trick, with lookalike Clint Burns (also played by Roy) and loads of mixed-up identity. Republic must have watched Fox’s The Return of Frank James enviously because they went one better: they had two female reporters, Polly and Jane (Sally Pane and Gale Storm). Polly is mighty handy with a derringer and smitten by Jesse (not Clint, she can tell). There’s a bad-guy gambler who tries to shoot Jesse with a derringer too. A two-derringer picture! That’s the kind for me. 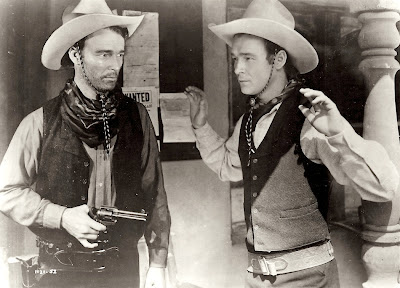 
Roy sings a song to Polly as they are ridin’ along. Yup, it’s got all the ingredients. 53 minutes of rootin’ tootin’ fun. By the way, Roy seems to have remarkably faithless to Gabby’s granddaughter, she who featured so attractively in the 1939 picture. She is not mentioned at all and Roy is free to dally with St Louis journalists. What happened to her? Well, one doesn’t like to be indiscreet.


Jesse is a real Robin Hood, robbing the trains and giving the railroad’s money to local farmers who risk being evicted. This exchange will give you the idea:


Sheriff Gabby: Listen, Missy, I’ve known Jesse since afore he was born.
Reporter: You have? Is he really a ruthless outlaw and killer?
Gabby: Course he ain’t. Why, he wouldn’t hurt a fly. Unless it was workin’ for the railroad.


To be honest, I wouldn’t put these two Roy Rogers Jesse James movies in the totally unmissable class.


Unless you are obsessed with Westerns and a Jesseholic.