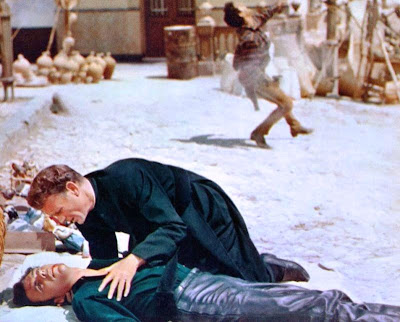 Once you get over the shock of an entire 1950s Mexican village speaking with British accents (and, shockingly, there not being a comma in the title), you do get drawn into this community and its drama.


The story of The Singer Not The Song concerns an Irish Catholic priest, Fr. Keogh, played by eminent and posh Brit actor John Mills, arriving in a country town to find it dominated by a gangster in the shape of 50s English screen idol Dirk Bogarde, camp in very tight black leather pants. The blonde vamp of the place, a sub-Bardot actress named Mylène Demongeot, a Niçoise, sets her cap at the handsome priest - a love doomed, of course. Doubly-doomed, actually because he's gay. Bandit Dirk is more interested in the priest than he is in Mylène, so we have an impossible love triangle (for no homosexual affair could have been consummated on screen in 1961). It is all done by allusions and hints.


In the sense that Dirk rides a horse and wears a cowboy hat and a gunbelt, and in the theme of the town treed by a badman, this is a Western. In all other respects, though, it is a torrid and rather melodramatic love story with peculiar twists. There’s some Graham Greenery about it as the Catholic priest battles for the soul of the murderer while the murderer appears to be more interested in the body of his interlocutor than his soul.


Mills has a slightly phony Irish accent but is earnest and passionate. Bogarde is cynical and often raises a single eyebrow to prove it.


The love triangle becomes a sort of distorted quadrilateral when “Old Uncle” tries to kill the priest, more out of jealously than anything, for he sees the Rev. as a rival for his affection for the young bandit. The Old Uncle is a burly Mexican with all the trimmings (bandoliers and so forth), who came from Thames Ditton, Surrey (Laurence Naismith). 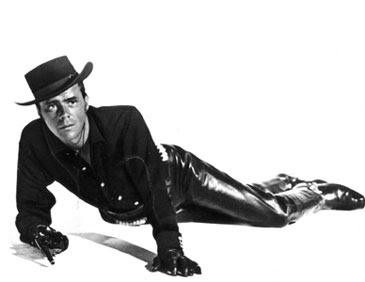 The film was produced and directed by Londoner Roy Ward Baker, and was filmed at Pinewood studios in Buckinghamshire and “on location” (a daft expression; in this case it means Torremelinos in southern Spain). So it’s rather in the Shalako tradition of British spaghetti – what I call a shepherd’s pie western, for it seems that Eurowesterns have to be named for antional dishes. The cast is peppered with British character actors: John Bentley is the Mexican police chief, Leslie French is the old Mexican priest whom Mills replaces, and so on. The screenwriter (Nigel Balchin) came from Wiltshire, the music writer (Philip Green) from Whitechapel and British-born folk or British residents populate the credits and crew. So it’s a Brit western all right, with everything that implies.