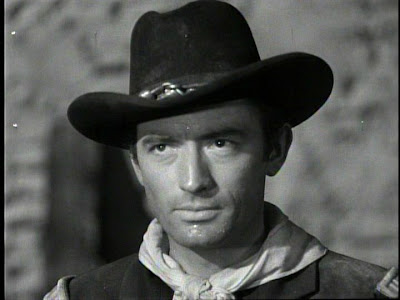 You’d think a Warners 1951 Western with Gregory Peck and Ward Bond would be a big movie with a large cast and no expense spared. Instead, Only The Valiant, sometimes known as Fort Invincible, seems just like a second-feature black & white Lippert production. Mostly shot on studio sets, low-budget, with some attempt at building tension (at times it’s almost a whodunnit), it is in fact a typical Gordon Douglas effort. Douglas wasn’t bad and he occasionally produced something a bit better than average (Fort Dobbs, for example, or The Nevadan, or even something really good, such as The Fiend who Walked the West) but all in all most of his stuff was bread-and-butter. And early 50s Warners Westerns were often second rate.
Of course Peck was towering, an excellent Western hero to rank with John Wayne, Henry Fonda or even Gary Cooper. Here, as US Army Captain Richard Lance, Dick to his (precious few) friends, he is fine, very fine, and he makes a pretty low-key film with an ordinary script into something much bigger.


Ward Bond does his stereotype Fordian drunken Irish corporal act and hams it up for all he was worth (which was quite a lot). Every so often he produces a malign, snide glance that shows real menace. But most of the time he sings drinking songs in a brogue. Jeff Corey is good as the tough old Army scout, Joe Harmony. Lon Chaney is a curious Trooper Kebussyan in a big black beard whom they call A-rab and who refers to Peck as “effendi”. You can see him building up for self-sacrifice a mile off. Neville Brand is excellent as a bullying Sergeant Murdock. 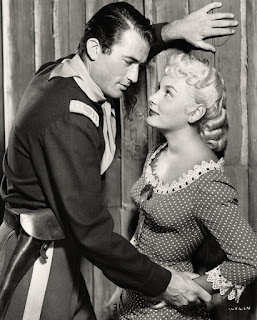 At one point Peck tells his suicide-mission group why he ‘volunteered’ them: he lists their faults in a devastating way – cowardice, drunkenness, desertion and so on. He took them out of the fort, he says, because they were the troops that could best be spared and who would be least missed if they were killed. Nothing like encouraging your men.


Barbara Payton (with whom Peck is said to have had an affair on the set) as Cathy jumps to an enormous conclusion and assumes Peck guilty of a base act, spurning him. Like all good Western heroes, Peck does not lower himself to self-justification. If she wants to think that, let her. Of course, later she realizes she was wrong and wants him back. I would have told her where to get off but Peck ends up in her arms with Bond drunkenly serenading them both. It won’t last.


The few location shots were filmed around Gallup, NM. Pity we didn’t get more. The fort has a Beau Gestey look about it.


Habitual 'Indian' Michael Ansara is quite imposing as Apache chief Tucsos and there is an improbable 1:1 duel at the end in which he cashes in his Apache chips. OK, so I’ve spoiled it for you but I haven’t really: you knew that.


Peck said that this was his least favorite of all his movies. Not hard to see why, really. But because of Peck's contribution the film is by no means a clunker.