You can just imagine the moguls at MGM in 1961. The conversation went like this:

"We’ll put together the biggest Western ever. Money no object."
"John Ford, he’ll direct."
"Why stop at Ford? Hathaway too."
"And let’s throw George Marshall in. He was great on Destry."

"Now, stars. We’ll need them all. All! Peck, Stewart, Fonda, Wayne, Widmark, get ‘em on the phone right away."
"Lee J Cobb. Malden. Robert Preston. Oh, and we better throw in a young handsome one. What about this young fellow Peppard?" 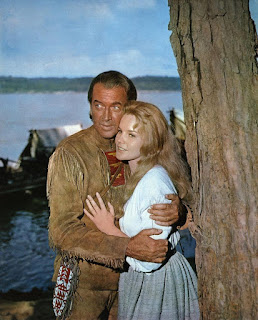 "Female lead?"
"Debbie Reynolds. She’s still in her 20s. Just. And she did all those songs in Singin’ in the Rain. We’ll need songs."

"Now, cinematographers: Charles Lang? Bill Daniels? Milton Krasner, maybe. How about Joseph LaShelle? Can’t decide? Have ‘em all."
"Metrocolor and three-strip Cinerama, of course. It's crap but it'll bring the masses in."

"Music? Alfred Newman better do the score. Based on a cheery theme and something folksy like ‘Greensleeves’."
"That corny?"
"Sure, the public love corn."

"Now, we need a story."
"Well, we’ll start with a mountain man, obviously. Stewart’ll do for that."
"Then a wagon train. That’s where charming gambler Peck can meet Reynolds. She’s maybe inherited a gold mine."
"We’ll need some Civil War scenes. Ford, of course. Wayne as Sherman, that wouldn't be ridiculous, would it? He did it on TV in Wagon Train. Shock and awe in those scenes. Lots of cannons. 12,000 extras." 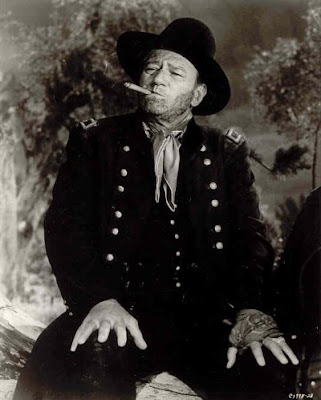 "Yes. Of course, we’ll have to have some outlaws and tough marshals to clean up the town. Eli could do the badman gunslinger."

"It’s all coming together. Let’s have another martini."
"Hey, I’ve got another great idea. We’ll get Spencer Tracy to do a voiceover narration. History of the West."

Debbie Reynolds was hopeless. Couldn’t even sing. The songs were lousy anyway and there were too many.

Hardly anyone saw the movie in three-strip Cinerama and MGM couldn’t be bothered to film it simultaneously in normal format so we all have to watch it now in three sections with horses crossing the screen in a V-shape. Hathaway is said to have remarked, "That damned Cinerama. Do you know a waist-shot is as close as you can get with that thing?" In mailbox format, which is how 99% of people saw it, faces are indistinguishable in long shot. And the three cameras used filmed actors separately so that when the montage was made they appeared to have no eye-contact with each other - because they had none. The movie was, thank goodness, one of only two made using the process.

Even Fonda no good

The James R Webb/John Gay script was a total clunker, full of corny clichés and lines like cement. Unbelievably, the picture won an Oscar for the screenplay. The action scenes, such as the Malden family on the raft, are all false. Where stuntpersons are used, they are too obviously men in dresses in the rapids. The movie is way too long (162 minutes, would you believe).

Harry Morgan was Grant! You can’t stop laughing throughout the scene. Chicago-born Malden was always completely hopeless in Westerns. Peck is miscast as a cad. In fact they are all miscast. Stewart, ridiculous as a mountain man, looks like his fiancée’s grandfather. His supposed father-in-law (Malden) was four years younger than he was. Even Fonda can’t bring authority to the acting. He's a buffalo hunter.

It just goes to show: huge budget, top direction, mega stars, expensive locations, famous photography and what do you get? A lousy Western. This movie was one giant gimmick and artistically it was a total turkey. Anyway, Westerns shouldn’t be didactic.

I really don’t like this film. (You may have gathered).
Some people do, though. It was a massive commercial success. Produced on a then huge budget of $15 million, it grossed $46.5m at the North American box office, making it the second highest-grossing film of 1963, and it made $50 million worldwide. It won three Oscars. The score was listed at #25 on AFI's 100 Years of Film Scores. The picture gained a perfect 100% rating on Rotten Tomatoes. In 1997, the film was selected for preservation in the National Film Registry of the Library of Congress as being deemed "culturally, historically, or aesthetically significant". The movie spawned an ABC TV series of the same name. Quite extraordinary. All for a bloated badly-written 'epic' of no discernible merit.

Henry Hathaway directed most of it, with George Marshall doing the railroad sequences and Ford the Civil War. I hope they were properly ashamed.