Back to the British Western for a while:


In the tradition of the ‘shepherd’s pie’ Western (what I call British cowboy films; European westerns have to be named after a national dish) comes Catlow. British producer Euan Lloyd, who filmed various versions of Louis L’Amour Western tales, including Shalako, and Chicagoan (but British resident) director Sam Wanamaker put this spaghetti variant together.

Filmed in Spain - and the grayness of those Almeria locations is exaggerated by a very pale washed-out print - and with much spaghetti-esque dubbed-on horse clip-clops, the film is really little more than an early 70s late Italian western which just happens to be British. 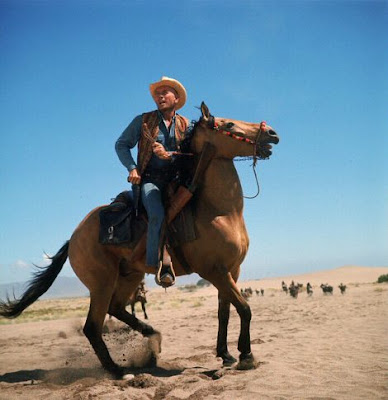 It opens with much dust and many (expensively imported?) long-horned cattle, to the tunes of sub-Magnificent Seven music (by Brit Roy Budd). Richard Crenna (solid) is a tough but sympathetic US marshal on the trail of rustler Catlow (a surprisingly bad Yul Brynner in 70s flared jeans and a stupid straw cowgirl hat).

However, on the trail of both is the sinister, evil Miller (Frank’s brother?) played by a quite splendid Leonard Nimoy. Of course you can’t help checking out his ears but once you get past that you realize what a great baddy he made. He carries a Steve McQueen-like cut-down Winchester in a holster on his flank. He also has a rifle with telescopic sights. And a beard. Tragic, therefore, that he has hardly anything to say or do apart from shadow the protagonists and his character cannot develop at all – but that’s the spaghetti genre for you.

The bath scene looks like the one in The Good, The Bad and the Ugly. ‘Abilene’ and ‘Nogales’ look very Spanish. Crenna looks like my Uncle Denis. In fact everything looks like something else. Again, that’s spaghetti for you.

There’s a typical early-70s slo-mo lerve scene with slushy music (yawn). There’s some tosh about Confederate gold (yawn). I can’t place the voice of the person who dubs the Mexican general but he did countless characters in spaghetti westerns. 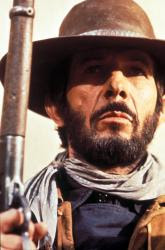 The main trouble, though, with this film is that it can’t make up its mind whether to be a burlesque, a parody or a straight Western. The novel, Catlow, needless to say, was done straight and is all the better for that. The ‘comic' disposing of the soldiers guarding the mule train, for example, is woeful. Brynner tries hard to be charming and amusing but fails. Crenna goes for a straighter style but that doesn’t really come off either, with the lines he has to say. It’s really the fault of the director and writers (Scott Finch and JJ Griffith, the only film of the latter). Catlow just staggers to a two-revolver rating rather than the usual spaghetti one. It’s not complete junk. There is Mr. Spock with a Winchester, after all.

But it is, frankly, eminently unbuyable as a DVD.