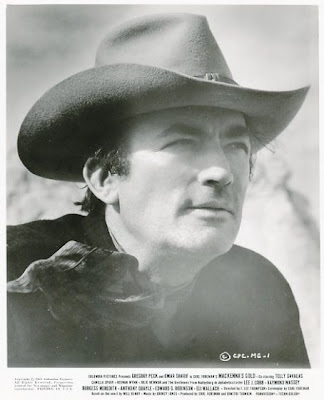 Gregory Peck (April 5, 1916 – June 12, 2003) came from a Roman Catholic San Diego family of British/Irish ancestry and was educated at a Catholic military academy and San Diego High School, then majored in English at Berkeley, where he started acting. He took drama lessons in New York and appeared on Broadway.


His first film, Days of Glory, appeared in 1944. He was to be nominated for five Academy awards for Best Actor (he won once, for his role as Atticus Finch in To Kill A Mockingbird), four of which came in his first five years of acting.


He made 11 Westerns. His height (he was 6' 3") and athleticism and quiet, stoical style suited Western roles very well and he was a fine actor capable of transmitting subtle nuances (only occasionally required in the genre…) He was not always lucky with his directors and scripts but even in the weaker vehicles he added class and in the better ones he was magnificent. The Gunfighter must rank as one of the best ever examples of the genre.

The best of them were certainly The Gunfighter and The Bravados.

Yellow Sky, The Stalking Moon and Billy Two Hats, were of high quality.

The Big Country and Duel in the Sun were epic big-budget sagas.

Only the Valiant was a minor Western, really, but had its points.

Shoot Out was a rarity for Peck, a mediocre picture.

Both Mackenna’s Gold and How the West was Won were really bad, the first a poorly-directed and written pot-boiler and the other a giant turkey in which Peck was miscast, but in general Gregory Peck ranks with Gary Cooper and Henry Fonda at the very top of the acting profession as far as Westerns are concerned.