Grim, dark, stark, this film still has the power to shock 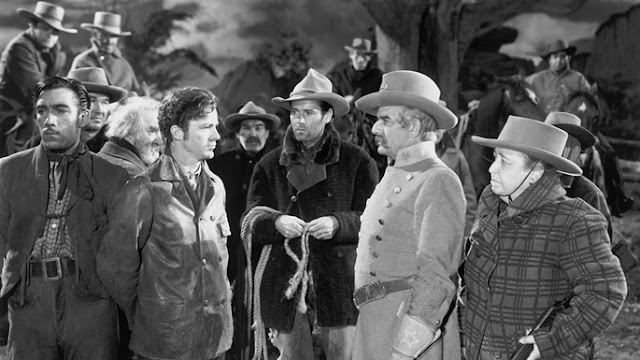 Westerns that have little action, a lot of talking and are shot on studio sets, movies so static that they could be filmed plays, are maybe not proper Westerns at all. Yet sometimes a Western ‘play’ comes along that is a truly great film and The Ox-Bow Incident is one such.


Henry Fonda and director William A Wellman nagged Darryl Zanuck into making it. Zanuck agreed to the uncommercial vehicle only if Wellman and Fonda signed up to more audience-friendly movies. As Zanuck predicted, it did little at the box office in the darkest hours of the Second World War when Westerns were popular but only if they contained color and shooting and scenery. But it became one of the best ‘serious’ Westerns in the history of the genre and is still to be admired.

The story is of a lynching, in 1885 Nevada, when some townspeople take it into their head to hang three men they believe guilty of rustling and murder. In the only 75 minutes of its length, it succeeds, thanks to the fine original book by Walter van Tilburg Clark and the Lamar Trotti screenplay, as well as the excellent Wellman direction, in delineating and developing the characters. In 1943 the message of how easily justice and right may be perverted was one that struck home.

Of course the film has Henry Fonda in it and is therefore strong, tough and moving. His stand for justice is all the more effective because he is just an ordinary cowpoke, apt to drink and fight. Nebraska-born Fonda was fourteen years old when he observed a lynching. He watched a mob from the second floor window of his father's print shop. "It was the most horrendous sight I'd ever seen… We locked the plant, went downstairs, and drove home in silence. My hands were wet and there were tears in my eyes. All I could think of was that young black man dangling at the end of a rope." Fonda made several films condemning the evil of lynching and questioning capital punishment in general.

But there are fine supporting actors too. Frank Conroy, as the leader of the mob, decked out in his Confederate uniform, is a swine, as despicable for his treatment of his own sensitive son as he is for his perversion of justice. But the worst of the rabble is a fat woman, brilliantly played by Jane Darwell, who jokes at the condemned men’s expense and sits with another odious member of the lynch mob and cackles as the victims are condemned. What makes these members of the lynch mob so especially appalling is their total lack of respect for either human life or for justice. The preacher is pathetically ineffectual. Fonda and his friend William Eythe, along with a decent store keeper, Harry Davenport, are observers and though they stand against it, they do not intervene. The men are hanged.

Of the three victims, Dana Andrews is moving and the great Francis Ford full of pathos as the feeble-minded old man but Anthony Quinn is outstanding. It is extraordinary how Quinn could bring such power to a ‘minor’ role. The movie observes the classical unities and is a tragedy in the true sense. It is a whole (notice how the two riders come in at the beginning and a dog crosses the street and you have a mirror image of this at the end).


Grim, dark, stark, this film still has the power to shock.