Billy the Kid in fact and fiction (Part 2/2)

I have just re-read the copy of a book I bought, I am proud to say, In Lincoln NM on 10th August 2005 (I always write when and where I bought books on the flyleaf). It’s Billy the Kid: a Short and Violent Life by Robert M Utley (University of Nebraska Press, 1989.

I have one great advantage in life: although I have a good short-term memory (and was always good at cramming or exams, for example), I have the long-term memory of an amnesiac flea. Why is this an advantage? Simple! It means I can read books, totally forget them and then read them again a few years later as if they were totally new. I save loads of $$$ that way. 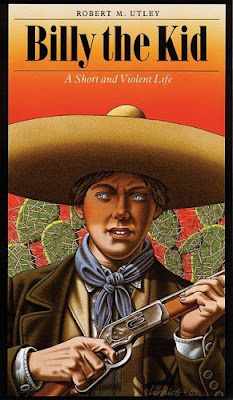 It’s an excellent book. Much of it covers the same ground that we went over in Mr. Utley’s High Noon in Lincoln: violence on the Western frontier (University of New Mexico Press, 1987). William Bonney (or Henry Antrim or McCarty or whatever his name was) did not play a leading role in the Lincoln County War but he did participate actively. The 1989 biography that followed that book uses much of the same material but adds, very interestingly, details of his early life, such as it is known, and his turning to outlawry and demise.

The last chapter, ‘The Legend’, is in some ways the most interesting of all. Utley shows us how the press, as far away as the New York Sun, dealt with his slaying and how in less than a year five dime novels about him were already available. These first accounts highlighted the ‘wicked desperado’ side of Billy, emphasizing his cruelty, and declared that the country was well rid of him. They lauded Pat Garrett as an intrepid and resourceful keeper of the peace.

Pat of course very quickly came out with his own account. Perhaps to silence mutterings of his shot in the dark, which somehow went against the ‘code’ of the West, he penned his own story, The Authentic Life of Billy the Kid. It had a long and melodramatic sub-title. In fact, of course, Pat had it ghosted. He probably added to and even re-wrote some of the later chapters but most of it came from the pen of Ash Upton. Marshall Ashmun Upson was a journalist, printer and postmaster with a gift for prose that was flowery even by the standards of the day. His highly embellished account, full of inaccuracies and legend, became the standard source. It’s still available and a fun read. The Authentic Life of Billy the Kid
.
But it wasn’t long before the other side of Billy was emphasized: his good humor, his daring, his love of dancing and music, his success with the ladies, his abstemiousness (he didn’t drink or smoke, very rare amongst his compadres), and the grossly disloyal treatment he received from Governor Wallace, who reneged on his word. The landmark here was Saga of Billy the Kid by Walter Noble Burns, which came out in 1926. It’s still easily available. Here we have Billy as social bandit (not that the term was used then). He was a Western Robin Hood, using his sixguns to right wrongs and fight corruption. In 1941 Eugene Cunningham published his lurid Triggernometry, emphasizing this aspect.

It was this Billy, the Burns/Cunningham one, that Hollywood seized on for its cinematic representations: the sainted Billy, the noble Billy. We looked at this in http://jeffarnoldblog.blogspot.com/2011/01/billy-kid-in-fact-and-fiction.html


The films contained and still contain many of the groundless legends that Garrett, Burns and Cunningham created.

Of course the real William Bonney (let’s call him that) was neither sainted nor irredeemably wicked.


He was an outlaw and a killer, yes. He rustled and he killed men. He was guilty as charged when he was convicted of the murder of Sheriff Brady. He also killed two deputies, probably with their own guns, as he made his escape from Lincoln. He lied, broke an oath and he broke many laws.

But he was far from the evil desperado that he was painted. He was never captain of the Regulators. He participated in many of their actions, including the ambush of Brady, and one of his bullets almost certainly hit Brady, and he shared the guilt for the death of several other men, including the sympathetic James Carlyle at the siege of the Greathouse ranch. He was a mercenary soldier in the Lincoln County War. The crimes he committed then were no worse than those of others (who escaped judgement) and when he slipped into crime afterwards, it was only into stock rustling, then considered almost a minor misdemeanor. Only he was pursued to the death sentence by the courts. Governor Wallace did indeed renege: Billy did his part by testifying against other Lincoln County renegades but Wallace ‘forgot’ his side of the bargain. Compared with the corruption, drunkenness, violence and criminality of so many of the lawmen, officers of the court, ranchers and bandits of New Mexico in the 1870s, Billy’s crimes were relatively mild.

Billy is often credited for killing one man for every year of his life (he died at 21). In fact, we can say for certain that he killed Windy Cahill, a blacksmith who had been abusing him, when he was a boy in Silver City AZ in 1877; he killed the braggart Joe Grant in a Fort Sumner saloon (by manipulating Grant’s gun so that the hammer fell on a spent cartridge) in January 1880; and he murdered the likeable Jim Bell and the coarse bully Bob Olinger (or Ollinger) in his courthouse break-out in April 1881. Four men shot in a one-on-one conflict.

He almost certainly was one of the gunmen responsible for the death of six others, including Brady. This brings the total to ten. Not a pretty tally, to be sure. But others had done worse.

Billy was no angel, none at all. But neither was he the monstrous outlaw chief or bandit king of the lurid press. Of course, Hollywood didn’t lend itself to subtlety and it tended to show one or the other. We still await a film which shows us the real Billy. There’s plenty there for modern film makers. Perhaps the team that did The Assassination of Jesse James by the Coward Robert Ford could do it.