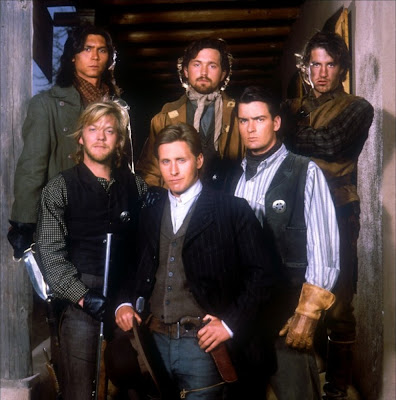 Every generation, from the 1930s on, had its Billy the Kid movie. Like many things in the 80s, that decade's version of the Billy tale is glitzy, had a background of loud pop music and is a bit thin on quality.


A late-eighties rock ‘n’ roll brat-pack Western and its sequel, these two movies have Billy the Kid (Emilio Estevez, like Bonney born in NYC and come out West, although Emilio's West was Hollywood, Cal) and some real and some invented characters rushing about New Mexico shooting people to the sound of up-tempo music.

The movies are lively, violent and action-packed. Like all Billy pictures, they are no respecter of history. The central characters are supposed to be young guns and at one point a character says that not one of them is twenty; in fact, of course, all the actors were adults; but they were all in their twenties anyway so that’s not too bad (some film Billies have been positively geriatric). Estevez is quite good, manic and homicidal, and the others try to establish characters without much help from the John Fusco script. In volume 1, Philips is the Mexican knife thrower, Sutherland is the poet and Casey Siemaszko as Charley Bowdre is afraid.
.
Terence Stamp is Tunstall. They wanted a tough Englishman. Jack Palance is the evil LG Murphy (in this version of the Lincoln County War, as Indeed in most, no doubts about which side are the baddies). Murphy implies that Tunstall’s motives for collecting young men around him are perverse. Stamp (whom I like but who was bad in the four Westerns he did) is shot down early on, as is Charlie Sheen, but Palance doesn’t meet his doom till the final reel. Brian Keith has a good but tiny part as an elderly Buckshot Roberts, killer. Patrick Wayne is Pat Garrett but the screenwriter and director (Christopher Cain in vol 1; Geoff Murphy did the second part) don’t give him anything to do and so the character is not developed at all, which is a pity because he has a Garrett air about him.

There’s some China love interest for Kiefer in the form of Alice Carter as Yen Sun.

Some of Casey’s dialogue was sampled by Warren G in ‘Regulate’.

There’s the throwing the lawman’s star in the dirt cliché. I liked the old woman with a guitar. There is too much shouting. The gunfight at McSween’s is an exaggerated slaughter like the Northfield massacre in The Great Northfield, Minnesota Raid or the bank raid in The Wild Bunch. McSween is killed in slo-mo by a Gatling gun. So no shortage of Peckinpah references.

The 1988 picture was a commercial if not critical success and spawned a sequel in 1990. 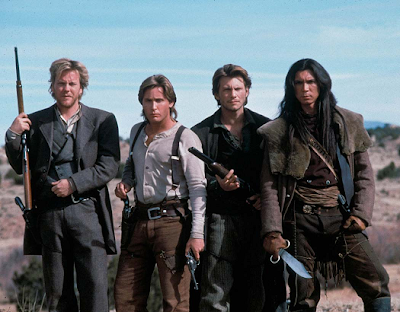 Kiefer Sutherland and Lou Diamond Philips. Billy is back. John Fusco wrote this one too and it has a lot in common: lots of action and stunts, those stupid phew-phew noises when people twirl guns or knives, loud music, lots of galloping and shooting.

It starts in 1950 with an old timer claiming to be Billy and telling his story in quivering voiceover like Jack Crabb in Little Big Man. William Petersen has replaced Patrick Wayne as Pat Garrett but is similarly characterless and his motives are not explored or developed. This time Dirty Dave Rudabaugh is with them but he is not the stocky killer of history but Christian Slater, quite good in fact. Someone named Alan Ruck has also joined the band, presumably to replace Charlie Sheen, shot in the first movie. James Coburn is there: not as Garrett but in a cameo as John Chisum. He quotes his “set fire to it” line from Pat Garrett and Billy the Kid. Lew Wallace is Scott Wilson, a rather less sympathetic Wallace than Jason Robards’s (as far as any character gets the chance to project character, anyway, which is very limited by the one-dimensional direction and script).

Jon Bon Jovi wrote a couple of songs, Blaze of Glory and Billy, Get Your Guns and they are typical rock numbers but Knockin’ On Heaven’s Door they ain’t.

There’s a boy with a stutter who calls Billy 'The Prince of Piss … toleers'. Very drôle. They ride through a store window as in several Jesse James movies. Beaver Smith of Fort Sumner is called Beever Smith. They use the ‘Big Casino’ gimmick. There is anachronistic writing (Garrett is offered money “up front”) but that’s consistent with the quality of the screenplay, which is pretty poor. Kiefer quotes the poem El Dorado like James Caan in El Dorado. The escape from Lincoln and killing of Bell and Ollinger follow Peckinpah (and history) closely enough but the characters aren’t nearly so strong (not that anyone could be a better Bob Ollinger than RG Armstrong).

It’s a true sequel and repeats the formula exactly as before. Like its predecessor it’s quite fun – a racy, noisy, action-packed, bratpack movie, worth a watch but probably not a DVD.

Both films are quite nicely shot by the able Dean Semler in New Mexico and Arizona and are attractive in parts.

These are lightweight modern Westerns but quite fun and they gallop along.