You might think that once he'd done The Searchers, it would be all downhill for John Wayne. But it wasn't. He had twenty years of Westerns to go yet and while many of them were commercial rather than critical successes, some were very good and two were outstanding, on a par with anything he ever did. I refer, of course, to True Grit (1969) and The Shootist (1976). 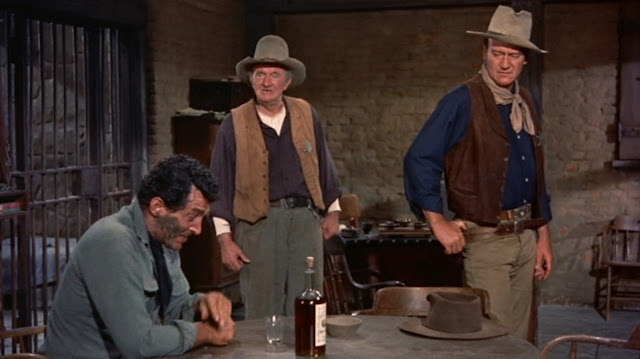 Three years on from The Searchers, this was a totally different Western. Wayne had entered his later years as a fixture of the Hollywood Wild West. Rio Bravo has little Fordian artistry about it. Though directed by Howard Hawks (below, talking with Wayne, Martin and Nelson) and co-starring Walter Brennan, it was no Red River either. It was a classic, commercial Western of straightforward design, and it had them waiting in lines all round the block to get in.
. 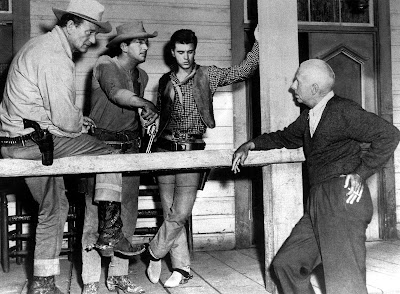 The Mexicans call the Rio Grande the Rio Bravo and the John Wayne picture Rio Grande was called Rio Bravo in many countries. This is not that. Hawks directed Wayne with the same story in El Dorado in 1966 and yet again as Rio Lobo in 1970. Is that all clear? I wouldn't want you to get confused.
.
Southern Texas (filmed in Arizona). Sheriff John T Chance has Claude Akins locked up in jail and has to keep him a week and fight off a whole gang till the US marshal gets there. He has only “a drunk and a cripple” (Dean Martin and Brennan) to help him, that is until Ricky Nelson arrives. This was the late 50s and early 60s when no Western was complete without a pop singer. Nelson looks about 12 (he was 18) and has the tightest trousers ever seen on film. He can’t sing worth a damn compared to Dean Martin but they make a decent duo with My rifle, pony and me (the tune had been used in Red River), with Walter Brennan’s harmonica obligato. Luckily Wayne (“Singin' Sandy”, remember?) declined to join in. 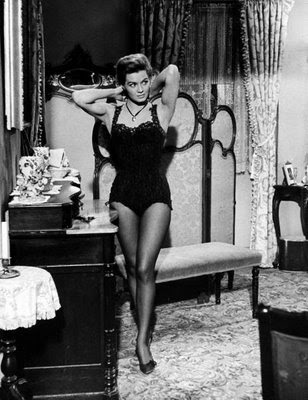 Ward Bond was there to help (Hawks seems to have taken over the whole Ford stock company) but he soon gets shot. Angie Dickinson, as lady gambler who falls for Wayne, shows off her sensational figure, quite often.
.
Wayne is his usual leathery self, spinning his Winchester to cock it. I love his short jacket and calf-length pants and that hat has to be one of the best ever (Wayne had worn it since Stagecoach).
.
It’s a fun film, full of color and corn, and none the worse for that. It has a splendid final shoot out.

It’s juvenile, predictable and full of clichés but it’s a real Western with zip and pzazz and you have to love it. High Noon it ain’t but hey, who cares.

Actually, it was made, ten years after High Noon, as a kind of riposte. Wayne and Hawks had both disliked the Gary Cooper picture, in which the marshal had thrown his star in the dirt. It was unAmerican, they thought. Law 'n' order has got to be respected. In this version, the sheriff obstinately retains his badge and wins out over the bad guys against all the odds, with the help of some townspeople, but essentially by his own bravado. Of course High Noon was one of the greatest examples of the Western genre, perhaps even the greatest, whereas Rio Bravo is just a fun way to fill a movie theater.
.
Quentin Tarantino said that if he started getting interested in a girl he would show her Rio Bravo. And she better like it…