Billy the Kid in fact and fiction (Part 1/2)


Billy, they say that Pat Garrett's got your number 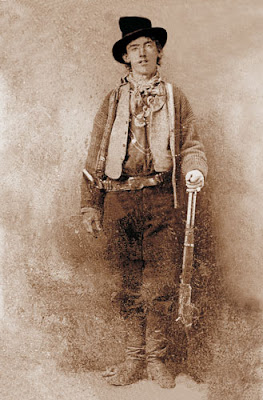 Billy the Kid, now, his story has spread even farther from truth and fact than Wyatt Earp's has.

Partly because facts were thin on the ground even when he lived and media reporting (which in those days meant pretty well only newspapers, supplemented by partial first-hand accounts in memoirs and letters) so dubious, legend has long taken over from history. Legends have a way of reinforcing themselves as they are repeated in novels and films until the myths are taken as fact. The legend becomes the truth, if that’s not too existentially dubious. In Billy’s case, his story has become history.

The best historical treatment is probably Billy the Kid: A Short and Violent Life by Robert M. Utley (Paperback - Aug 1, 1991). I’ve read it and it’s scholarly, balanced, fair and researched. Oh, and readable.

But Mr. Utley and other historians have a hard task before them when they write about a person whose very name is in doubt. Of course, for us legendists, the name ‘Billy the Kid’ suffices, indeed sounds with a magic ring.

If you don’t want to read a scholarly study all through, a quick read of http://en.wikipedia.org/wiki/Billy_the_kid (external link) will give you the basics. It seems an accurate summary.

Books about Billy abound, are bound and are bound to be controversial (sorry about the play on words). Many are more or less factual; many are, admittedly or otherwise, fiction. Of the better fiction we must mention especially The Collected works of Billy the Kid: Left handed poems by Michael Ondaatje (Paperback - 1979), award-winning biography in the form of experimental poetry.

Two good novels are Anything for Billy : A Novel by Larry McMurtry (1988) and Lucky Billy: A Novel About Billy the Kid (Center Point Premier Western) (2009) by John Vernon (2008) a professor at Binghampton University.
.
Dare I add that Billy also appears, briefly, in my own second novel Stay and Die. 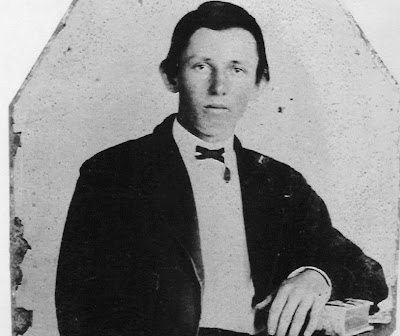 Billy has made it musically, of course. Billy The Kid by Aaron Copland, Leonard Bernstein, and New York Philharmonic (Audio CD - 1990) is a lovely piece, full of fire and gentle airs (although it was a ballet and I don’t know how that would have been).
.
And don’t forget the soundtrack to the movie Pat Garrett & Billy the Kid by Bob Dylan.
.
Billy the Kid, a folk song in the public domain, was published in John A. Lomax and Alan Lomax's American Ballads and Folksongs, and also their Cowboy Songs and Other Frontier Ballads. Billy the Kid was also a folksong sung by Woody Guthrie, recorded by Alan Lomax in 1940 for the Library of Congress (#3412 B2), with a melody Guthrie later used for his song So Long, It's Been Good to Know You. Doubtless Dylan had it in mind.
.

Jon Bon Jovi, Marty Robbins, Ry Cooder and Billy Joel, among others, have all made a stab at immortalising Billy in song.
.
As for the stage, there was Joseph Santley's 1906 Broadway play and the Michael Ondaatje work mentioned above was staged in 1973.
.
And then we come to celluloid.
.
There have been dozens of movies, for over 70 years, ranging from pulp to art, and doubtless there will be others.
.

Here’s a sample:
.1. Billy the Kid, 1930 was a talkie film directed by King Vidor and starring Johnny Mack Brown as Billy and Wallace Beery as Pat Garrett. It set the standard for Billy films.
2. Billy the Kid Returns, 1938: Roy Rogers plays a dual role, Billy the Kid and his dead-ringer lookalike who shows up after the Kid has been shot by Pat Garrett. OK if you like Roy Rogers movies.
3. Billy the Kid, was a 1941 remake of the 1930 film, starring Robert Taylor and Brian Donlevy. Not teribly good but it has its points.
4. Buster Crabbe played Billy the Kid (as a total goody) in a long series of dire B-movies during 1942 and 1943. Try, for example, Billy the Kid's Smoking Guns or Sheriff of Sage Valley. Or don't.
5. The Outlaw, Howard Hughes's perfectly dreadful 1943 motion picture featuring Jane Russell as the Kid's fictional love interest. Jack Buetel was a wooden Billy the Kid.
6. Dean White was (briefly) Billy the Kid in RKO's Return of the Badmen in 1948.
7. The Kid from Texas (1950, Universal), film starring Audie Murphy - Billy's place of origin was changed to appeal to Texans and capitalize on Murphy's association with that state.
8. The Law vs Billy the Kid (1954, Columbia) starred the excellent Scott Brady.
9. The Left Handed Gun, Arthur Penn's 1958 motion picture developed from a Gore Vidal teleplay, starred a method-acting Paul Newman as Billy and a very good John Dehner as Garrett.
10. The Boy from Oklahoma (1954) had Tyler MacDuff in the role of Billy the Kid.
11. One-Eyed Jacks (1961) was directed by actor Marlon Brando, who also played its lead character, Rio. The story was from an adaptation by Rod Serling of a Charles Neider novelization of Billy the Kid's life, with later revisions by Sam Peckinpah, among others. The movie is, though, only very tenuously a Billy the Kid one.
12. Chisum is a classic commercial 1970 movie starring John Wayne as John Chisum, dealing with his involvement in the Lincoln County War (there wasn't any, really). Billy is portrayed by Geoffrey Deuel.
13. Dirty Little Billy, Stan Dragoti's 1972 film starred Michael J. Pollard as a revisionist Billy.
14. Pat Garrett and Billy the Kid, Sam Peckinpah's 1973 motion picture starred Kris Kristofferson as Billy, James Coburn as Garrett, and had a soundtrack by Bob Dylan, who also appears in the movie.
15. Young Guns was Christopher Cain's 1988 motion picture starring Emilio Estevez as Billy and Patrick Wayne, son of John, as Garrett.
16. Bill & Ted's Excellent Adventure was a 1989 time travel time-travel movie featuring Dan Shor as Billy the Kid.
17. Gore Vidal's Billy the Kid was a play, then TV film starring Val Kilmer as Billy and Duncan Regehr as Garrett.
18. Young Guns II was the 1990 sequel. It starred Emilio Estevez as Billy and William Petersen as Garrett.
19. Purgatory was a 1999 made-for-TV movie starring Donnie Wahlberg as Deputy Glen/Billy The Kid.
20. Requiem for Billy the Kid: Anne Feinsilber's 2006 motion picture starring Kris Kristofferson.
21. Lucky Luke: French director James Huth's movie had Michaël Youn as Billy.

They say that Pat Garrett's got your number

So sleep with one eye open when you slumber
Every little sound just might be thunder
Thunder from the barrel of his gun.