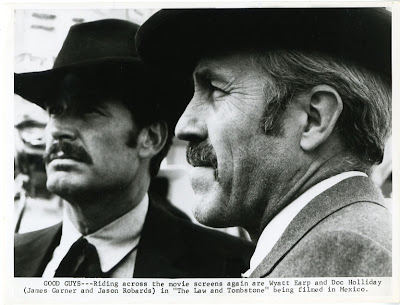 Another in the long series of pictures about Wyatt Earp came out in 1967. It contained one of the better Wyatt/Doc duos in the shape of James Garner and Jason Robards. Garner, once the audience had put aside his Maverick persona, turned out to be a tough, gritty, hard-boiled Earp in the classic tradition. Robards is splendidly misanthropic and also technically superb as a man with TB.


Lucien Ballard’s Panavision photography is excellent (though it looks wonky on the small screen) and the Durango, Mexico locations are appropriately dusty and sunny. The music is good too and creates an atmosphere of menace and danger. 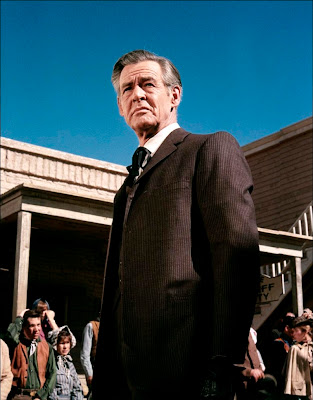 Any Western with Robert Ryan in it is likely to be worth watching and here he is Ike Clanton, a rich rancher, political wheeler-dealer Ike, not the usual Arizona low-life. Ryan always did well as the hard boss, the superior tough.

John Sturges directed and he could be relied on to produce a suspenseful, well-told tale. He had of course told it ten years before in his very popular Gunfight at the OK Corral.

So this telling has a lot going for it. However, the supporting actors (apart from Ryan) are unmemorable and the picture lays itself open to attack by needlessly showing a block-capital introduction reading THIS PICTURE IS BASED ON FACT. THIS IS THE WAY IT HAPPENED. The movie may have been slightly more accurate than previous versions in a few respects but as it has some preposterous hokum about Wyatt and Doc going down to Nogales and having a showdown with Clanton, leaving him dead in the dust, it shouldn’t really have claimed so much. Nobody blames Western movies for a lack of veracity. Except when they claim veracity.

Still, we mustn’t be too picky. The Edward Anhalt screenplay is tight, and unusual in the sense that the story begins, rather than ends, with the OK Corral. There’s action and the characters are well-drawn. This is a decent Western and a perfectly respectable version of the Tombstone legend.
.

Plus, everyone likes James Garner.
.