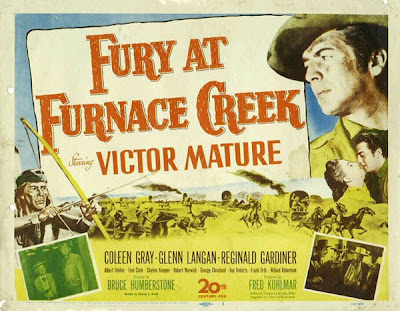 Kanab Movie Fort in Utah stood in at one time or another as Fort Laramie, Fort Bowie, Fort Yuma and the army post in She Wore A Yellow Ribbon. It was pretty versatile and got attacked by Indians quite a few times. It was also ‘Fort Furnace Creek’ in Fox’s fairly conventional but lively late 40s Fury at Furnace Creek.

Directed by H Bruce Humberstone, famous for his Charlie Chan movies and not really known for Westerns, and written by Charles G Booth, also far from a Western specialist, starring actors not known for their cowboy roles, such as matinée idol Victor Mature and war-film expert Glenn Langan, it might have gone badly wrong. Yet it works. It’s a tightly-plotted, fast-paced actioner with a lot to recommend it. 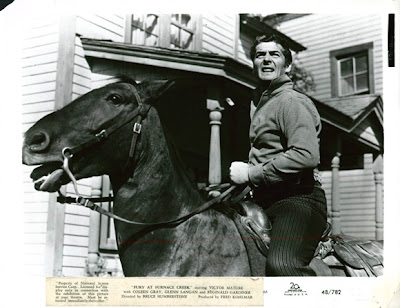 Coleen Gray is pretty and spirited as the waitress that Mature falls for. Englishman Reginald Gardiner is out of place as the plummy-voiced ex-US Cavalry captain who has taken to the bottle but after all, the US Army was full of men from all nationalities, some of them renegades, so it’s not implausible. Fox talkie stalwart Charles Kemper is fun as Peaceful Jones, the town drunk (a sort of Fuzzy Knight role) with his portable prison. And there’s splendidly nasty Albert Dekker who could play the principal baddy with aplomb in anything – Western, war film, gangster movie, you name it. New York accent, well-cut suit and caddish mustache – perfect.

Jay Silverheels is the Apache chief Little Dog, looking very unTontoish. We are told that he is very fierce, almost as fearsome as his line manager Geronimo. We have to be told this because his character isn’t developed at all. 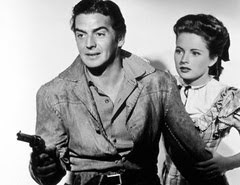 I spotted good old Ray Teal in there as an Army sergeant.

Despite the fact that Mature had been quite masterly as Doc Holliday to Henry Fonda’s Wyatt Earp in John Ford's wonderful My Darling Clementine two years earlier, he wasn’t really a Western actor. He was more at home in sword-and-sandal epics (or on the golf course). Still, in the end he did a fair few Westerns and was actually surprisingly good in them. In this movie he is rather, ahem, wide and while great in our first sight of him, in jail in his gambler’s frock coat, flicking playing cards expertly across the cell into his hat, as soon as he changes into Western duds he is less convincing. Never mind. We forgive him anything for his wonderful Doc.

There’s some good black & white location photography by Harry Jackson and a very decent Western town. The original music by David Raksin is charming, with variations on the themes of traditional songs.

All in all, this is a minor but very watchable late 1940s Western which you probably wouldn’t purchase on DVD and see often (The Searchers it ain’t) but you could do a lot worse if it came on TV. In my case this evening it was Furnace Creek or Pirates of the Caribbean. No contest.