Straight down the (telegraph) line. 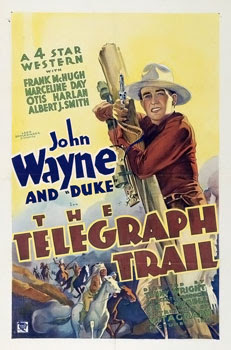 My late pa would have loved The Telegraph Trail. It’s fifty-four black & white minutes of straight-down-the-(telegraph) line action. There’s a brave Army scout as hero, a comic corporal for light relief, “red devils” galore, a vile renegade white man helping the Indians to try to prevent “American civilization struggling slowly westward” and, of course, a fair maid to be wooed ‘n’ won. What more could you want? Oh yes, the US Cavalry arrives at the last moment.
.
Great stuff.
.
After his starring role in The Big Trail in 1930, John Wayne entered his slightly less than Churchillian wilderness years of a decade of programmers for Monogram and other small studios, producing vast numbers of one-hour very-low-budget Westerns, some of them quite good. It wasn’t until 1939 that he was “discovered” (again) and catapulted to fame as Ringo in Stagecoach. By then he was an enormously experienced cowboy.

But in 1932 Wayne landed a contract to do six second-feature Westerns for Warner Brothers. Warners had bought First National and had the rights to Ken Maynard pictures. Wayne looked enough like Maynard, and Wayne's horse Duke looked enough like Maynard's mount Tarzan, to enable Warners to use old footage of the Maynard movies. The result was Ride Him Cowboy, The Big Stampede, Haunted Gold, The Telegraph Trail, Somewhere in Sonora and The Man from Monterey.

In The Telegraph Trail Wayne was still in his twenties and very handsome, but he was also still reciting lines he had learned, rather than acting. 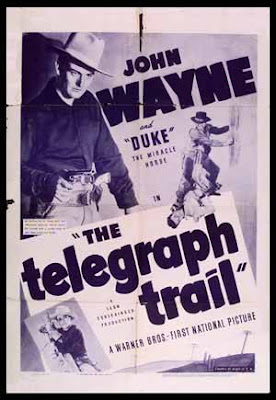 It’s the standard Western Union plot (though of course it predates Western Union by 8 years) as the construction of the coast-to-coast telegraph symbolizes the westward march of America’s manifest destiny. The (tribeless) Indians, who all whoop and do primitive war dances and can’t even read, for heaven’s sake, urged on by a skulking white man treacherous to his own race, try to destroy the wires. Wayne leads a work party to complete the task (although he is rather too busy fightin’ and romancin’ to actually do any work).
.
Frank McHugh is his comic sidekick, aided by Otis Harlan as the store keeper. They have a lot of jokey repartee and do a lot of drinking, always considered funny then. The villain is Albert J Smith, who was a classic he-man of the silent era and was the baddy in any number of oaters. Marceline Day looks very 1920s as the blonde storekeeper’s daughter who falls for the dashing scout. Second billing on the cast list went to Wayne’s horse, called Duke. It’s one of those annoying ‘intelligent’ horses which, when told to stand guard and be watchful, nods its head in assent, that kind of thing. Doubtless you've seen enough Roy Rogers movies to know the type. The best part of the casting, apart from Wayne, was not Duke but Yakima Canutt as the Indian chief High Wolf. He of course only has Ug-type lines but gets to ride around a lot and order attacks. 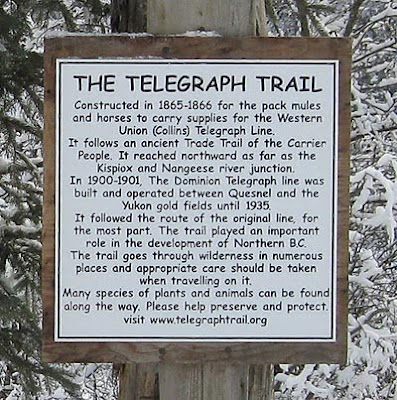 It had a big cast and was no ultra-low-budget pulp horse opera. There’s a lot of action and it zips along. Yes, the writing is one-dimensional but it was 1933. Some of the staging is hilariously 1D also, as if in a small theater, with characters seen side-on as they tell each other the plot in what is very obviously a three-walled room in the studio. There is speeded-up film when the Indians charge and tire tracks are seen from the camera truck that precedes them. Never mind. Who cares? It’s all energetic fun.

Wayne has a great pair of matched pearl-handled .45s worn handle-forward on his belt.
.

Turner bought it. Not sure that it’s out on DVD but it might be. Worth a watch!
.