The Western hero is self-sufficient

They go their own way


Lone Western heroes are self-reliant critters. They go their own way and depend on no person. They cross the desert alone on a horse, cook and eat what they hunt, drink from streams and spurn towns and beds and hotels (though have been known to venture into saloons).
.

They swim against the tide, stand out alone for what is right and are always strong, morally and physically. They are teachers, not learners. They are always experienced in Western lore, even when young.


Douglas J Den Uyl, in an essay Civilization and its Discontents (Lexington, Ky, 2010), tells us that Aristotle was the philosopher who is usually connected with the idea of self-sufficiency (autarkeia) and he quotes the Nicomachean Ethics to prove it. Now I don't know when you last thumbed through the Nicomachean Ethics but I'm sure it was quite recently and I'm sure you agree. Virtue, said our pard Aristotle, is a matter of independence and self-sufficiency A person who is passive and prey to emotions or subject to authority can ony with difficulty be virtuous. Virtue is an active matter. It requires excellence in action, and that action must be in pursuit of a worthy end. Gregory Peck in Only The Valiant (Warner Bros, 1951), which I watched last night, is an Aristotelian virtuous man. He is courageous, active, able to stand alone and decide for others, able to ignore ignoble slurs, all with a noble aim of saving the fort. In fact he ends up in the arms of Barbara Payton but she isn't worthy of him because she jumped to enormous conclusions and assumed, without proof, that he was guilty of a base act. She doesn't deserve him. Gosh, a man as handsome and decent as Gregory Peck could have had any girl in the fort. (Except I've just remembered, she was the only girl in the fort). 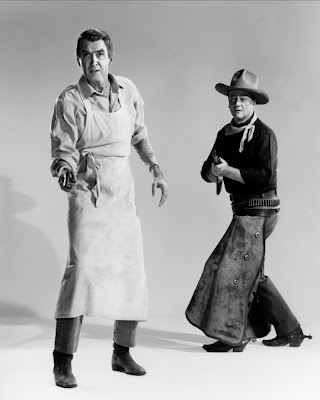 Dr Den Uyl is a Spinoza-ist, in fact, and he goes on in the essay to explain that the 17th century Dutch-Portuguese-Jewish thinker had those cowboy heroes down pat. Ransom Stoddard seems to be the real hero of The Man Who Shot Liberty Valance (Paramount, 1962). He is courageous and knowledgeable and noble, and he fights to bring law and order to Shinbone and what will become the State. But, suggests Dr Den U, our pardner Baruch would have preferred Tom Doniphon. Why? Tom may be rather more louche. He is certainly less educated. But he is more self-sufficient, more proficient, wiser in the ways of the West. Stoddard gets the girl but loses in the independence stakes. In the final showdown, Stoddard depends on Doniphon. Doniphon is the self-reliant one.


Stoddard, of course, was played by James Stewart and Doniphon by John Wayne, and it reminds me of something Stewart said once about himself and Wayne. I quoted it in my review of The Man from Laramie (Columbia, 1955): “Maybe what it is,” declared Stewart, “is that people identify with me, but dream of being John Wayne.” Stewart is more vulnerable, Wayne is more self-sufficient.
If I may paraphrase Leonard Cohen, you never once hear our Western heroes say I need you, I don't need you and all that jiving around.


Now, when did you last bring Aristotle and Spinoza to bear when considering Western movies?