I’ve always liked the Glenn Ford/Van Heflin 3:10 to Yuma (Columbia, 1957) and I thoroughly enjoyed the remake 50 years on, 3:10 to Yuma (Lionsgate, 2007), a bigger, flashier picture that you really ought to see in a movie theater. Today, I watched them both again, one after the other, on DVD, to make a comparison.

This viewing was prompted by another article in this rather tiresome book I am reading, The Philosophy of the Western (see posts), although the particular essay using these two films as a basis for discussion was better than the others read so far. The argument is that both films are good examples of basic liberalism inspired by John Locke, but that the 1957 movie was redolent of cold war imagery and feelings while the newer one was more a capitalist story which emphasized property rights. Hmmm, maybe. 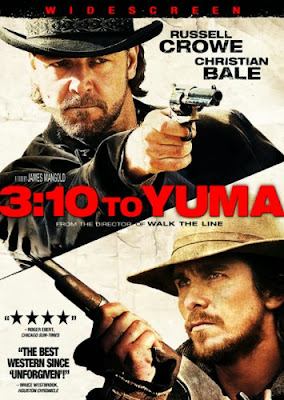 There are of course the fairly superficial differences you note right away: the 2007 movie is thirty minutes longer and in color, and it uses special effects not available to Columbia in the 50s. Whereas in 1957 there is a discreet fade-out when the bandit seduces the girl in the saloon, in 2007 we see her naked in bed as he sketches her. The language in 2007 would never have got anywhere near the 1950s censors and piss, shit and fuck are commonplace. The extra 30 mins of the new movie are used to pad out the plot (the original short story by Elmore Leonard is actually really quite sketchy and brief, and huge amounts have been added to both movies, but especially to the later film) and the whole thing is brasher and noisier fifty years on.

In 2007, the outlaws offer $200 to any townsman who guns down our hero; this allows there to be a huge final shoot-out against “thirty or forty guns” in the later film while the walk to the train was a more muted (and tense) affair in the original, with only the outlaws themselves doin' the shootin’. Characters have been added, notably Pinkerton man Byron McElroy (Peter Fonda), and the bumbling 50s drunk Alex Potter (Henry Jones) has been replaced by a would-be action hero Doc Potter (Alan Tudyk). More importantly, in 1957 the hero’s sons were two well-combed and well-behaved lads in a very minor part, while in 2007 the role of the elder son, William (the original rather biblical Matthew and Mark have become William and Mark), very well played by Logan Lerman, is vastly more important. In fact, he is central: the chief motivation for our hero’s courage is to shine in front of his son, which he does. The boy is also bolshier and more rebellious - much more like a 21st century teenager than a 1950s one. 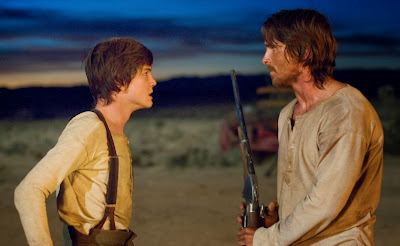 But there are also great similarities between the two movies: both are based on the Leonard story and both use some of the very same lines and scenes from the original Halsted Welles screenplay. The saloon scene in Bisbee, for example, is almost word-for-word the same. The barmaid used to work for a blind Irishman in Leadville instead of Dodge, that’s all!

The story at the heart of it is identical: a solid farmer, desperate for money to save his ranch and support his family, agrees for $200 to escort a dangerous bandit to Contention to catch the afternoon train to Yuma Prison. In both pictures the hero is later freed from his obligations by his employers when it gets too dangerous but he goes ahead anyway on the Western principle of “a man’s gotta do what a man’s gotta do” - just that the price paid is higher in 2007 than it was in 1957, or in the original short story.

Van Heflin as the decent rancher and Glenn Ford as the charming scoundrel were truly fine in the film directed by Delmer Daves. Heflin had already made the decent farmer’s part his own, of course, in 1953 when he played the archetype of gritty settlers in Shane. Ford was always a superb Westerner, usually playing the good guy but equally excellent as the villain. Unlike Heflin, Ford was a natural in cowboy roles. He somehow looked the part, rode superbly and in his trademark jeans jacket was just convincing.

In the original film, two real Americans were used (Heflin was born and brought up in Oklahoma and while Ford was born in Canada he moved to California at the age of eight and was a naturalized US citizen), both known for Western roles. However, in the film directed by James Mangold, the casting people got a New Zealand-born naturalized Australian and a Brit. These actors did a marvelous job with the accents (full marks also to their dialogue coaches) and with the roles in general. Russell Crowe plays Ben Wade with more menace and less charm than Ford did. He seems more dangerous and snake-like. He is certainly more murderous. Christian Bale (he had been the posh schoolboy in Empire of the Sun) has more grit than Heflin and is better with a gun. He has also acquired a Civil War back-story, including a false foot. 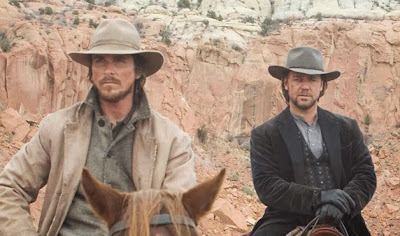 Bale and Crowe, both excellent

The role of outlaw chief’s sidekick, Charlie Prince, has been greatly expanded in the newer movie. Richard Jaeckel, always a good baddie, did a solid job in ‘57 but Ben Foster is perfectly splendid fifty years on. It’s a juicy part, of course. He is truly nasty and although Wade claims to be bad all the way through (otherwise he wouldn’t last a minute leading that band of cut-throats), we know that he actually has a small spark of decency in him. But Charlie Prince, now, not a bit of it. He absolutely hates railroad men and posses, Pinkertons and lawmen and, well, pretty well everyone, really, and gut-shoots them whenever possible. 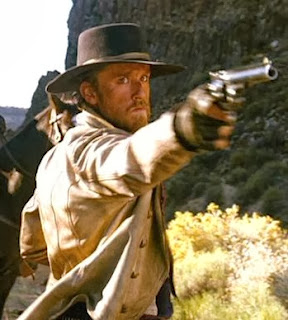 Visually, the earlier film is probably superior. The black and white photography by Charles Lawton is positively glowing. It’s shot with glaring sunlight that accentuates the dark shadows and interiors, rather like Floyd Crosby's work in High Noon, and of course the picture has a resemblance to the Gary Cooper classic as the hero, deserted, watches the clock tick towards the moment he must face the evil gunmen. The cinematography of the more recent film is by Phedon Papamichael and is good, certainly. The New Mexico locations (it was shot round Santa Fe) are enhanced by that lovely New Mexico light. The print I saw has a curious, almost yellowish wash to it. The Leonard story being set in Bisbee and Contention, the earlier film has perhaps the more authentic locations around Old Tucson, with the classic saguaros of the Arizona desert.

The later film is more of a railroad picture. Mr. Butterfield the stage line owner has become a railroad man; it’s the railroad trying to evict Dan Evans from his ranch; and there are various scenes of railroad construction. The railroad is, of course, as per the conventions, grasping and ruthless. Its staff members are sadistic and racist, the idea being we don’t mind when they are shot down. By 2007 actual trains were big-budget affairs so a locomotive only makes a fairly perfunctory appearance, with a hundred yards of track and some fake smoke behind a building, which is kind of a pity for a railroad movie.
.
As to the ending, I am not going to discuss that here in case you haven't seen either or both of the movies. Suffice it to say that they are different. I think I prefer the 2007 one, though the 1957 one was closer to the original story. 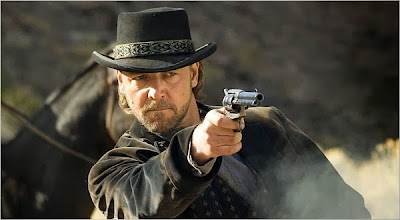 Bandit Ben Wade, 2007 style
The original story by Elmore Leonard appeared in Dime Western Magazine in 1953. It's only 15 pages and is, in that typically Leonard way, spare, stripped down and gritty. There is no farmer: a Bisbee deputy, Paul Scallen, brings the outlaw into Contention, to the Republic Hotel, and awaits the 3:10 train to Yuma. The outlaw is not Ben Wade but one Jim Kidd. Mr. Leonard got his revenge for the movie's name-change in 1972 when he wrote the John Sturges-directed picture Joe Kidd. Charlie Prince is the only significant other character mentioned. So even the 1957 film used the short story only as the bare bones for a far more complex plot. The 2007 movie inflates it even further. But that's OK.

2007's 3:10 to Yuma is a good, exciting, early 21st century Western, along the lines of Appaloosa or Open Range - that is, a straight, enjoyable, not very arty commercial picture which respects the conventions and which should be on any Western fan's list. The 1957 one was one of the greatest examples of the genre, probably Glenn Ford's and Delmer Daves's best work, and the new one isn't of that quality. But it's still a damn good film.