Walsh and Coop: it should have been good

In my rambling writings I have made no secret of the fact that I consider Gary Cooper to have been the finest Western hero of them all. I have also not hidden my opinion that Warner Westerns in the early 50s were often pretty dire.

Both propositions hold true in the case of Distant Drums.

Coop is superb. He always was, of course, even in an overblown farrago like Vera Cruz or a middling boys’ Western like Springfield Rifle. He lifted them. He gave them quality. In a fine picture he was towering, mighty. Gregory Peck, Henry Fonda, John Wayne, they would have done a good job in High Noon but no one could have done it as well as Coop. 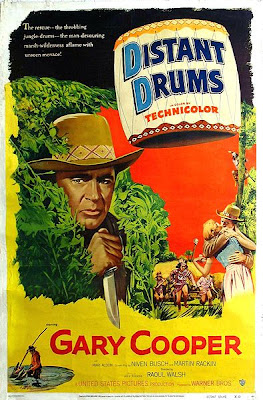 In this conventional tale set in Florida in 1840, he is steely, powerful, convincing. He brings to a pretty dodgy script an authority you simply don’t get elsewhere. He is also very well supported by Arthur Hunnicutt as a scout in a coonskin cap (odd wear for the Everglades). The perfect foil.

The rest of the acting, though, is dire. Lithuanian Mari Aldon, in particular, is far too posh to be the "Georgia cracker" she is supposed to be. Warners probably put her in because she was flavor of the month and you had to have a starlet. But she’s hopeless. So too are the supporting males, Richard Webb as the US Navy lieutenant who narrates the tale and Robert Barrat as 'General Zachary'.

But the main trouble is the script. Warners rewrote it to death, so keen were they to have every known feature of a Western in the movie, manipulate the ending, introduce the lerve interest, have a couple of comic asides, and so on. The original screenplay was by Niven Busch so would have been alright if left alone.

The film’s in a now rather garish Technicolor and since we are in the Everglades, various colorful wildlife shots are cut in (with noticeably different film stock) so that we can marvel (or shudder) at the critters and creepy-crawlies. It reminded me a bit of The Americano in this way, when Glenn Ford was in Brazil and so we had to have snakes and pumas and so forth. You’d think National Geographic had produced it.

It's amazing to reflect that Raoul Walsh directed it. He must certainly have been on auto-pilot.

Two years later Budd Boetticher directed Rock Hudson in Seminole, with a similar story. But in that movie Rock (who was actually surprisingly good, though nowhere near in the Gary Cooper class) was sympathetic to the Seminoles. Here, the Seminoles are out-and-out bad guys and fully deserve to be shot down in great numbers. That’s Warners 1951 for you. 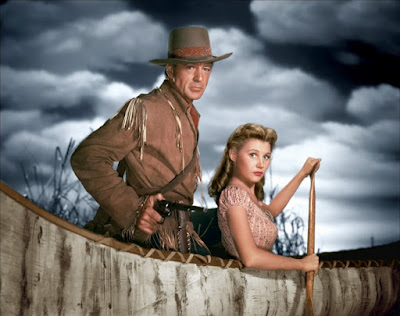 They paddle across the studio

One good thing is the Seminoles' costumes. They are not decked out as Apache look-alikes with breechclouts and red headbands, as most Hollywood Indians were, regardless of tribe. Someone went to a fair bit of trouble to get the look right and they are highly colorful. Nearly all those playing Seminoles were Seminoles. Larry Chance is their uncredited and unSeminole chief and isn’t bad but isn’t good either. The script doesn’t give him a, er, chance to be. This was his first movie. He later specialized in Indians in various low-budget pictures.

They all seem to have repeater rifles and pistols, which is odd for 1840.

The film poster, as you will see from the illustration, was probably the most hilariously stupid ever designed.

Many people thought Cooper was washed up after this dull and rather silly movie, and he himself was tempted to share that view. Of course High Noon the following year changed all that.

Very much a stodgy early-1950s Warners Western but Hunnicutt and, especially, Gary Cooper make it a must-see.