A great work of art cut to ribbons?

Major Dundee was Sam Peckinpah’s first big-budget Western. Ride the High Country and, especially, The Deadly Companions had been relatively modest affairs. In Major Dundee Sam could spread himself for the first time, and he sure did. It is said that Peckinpah was given a $4.5m budget which was reduced to $3m but he spent $4.5m anyway. It didn’t necessarily mean it was a better movie. The director/writer chose remote locations, abused and fired crew like there was no tomorrow and drank heavily. When martinet Dundee (Charlton Heston) becomes obsessed with his foray into Mexico, sinks into alcoholic depression and drags his exhausted men after him at whatever cost, you wonder if this wasn’t Sam himself we are talking about.


Michael Atkinson in The Village Voice sees in this mid-1960s picture a Vietnam parable: “Major Dundee is virtually without rival as a reflection of U.S. involvement in Southeast Asia, because it simultaneously gloats on irresponsible bloodshed, abhors military slaughter, and couldn't give a good goddamn about life or death.” This is easy to say about any film with violence in it from that period and I don’t think it’s quite so obvious as that. Yes, Major Dundee is nihilistic and violent but that was whiskey-sodden Sam for you. 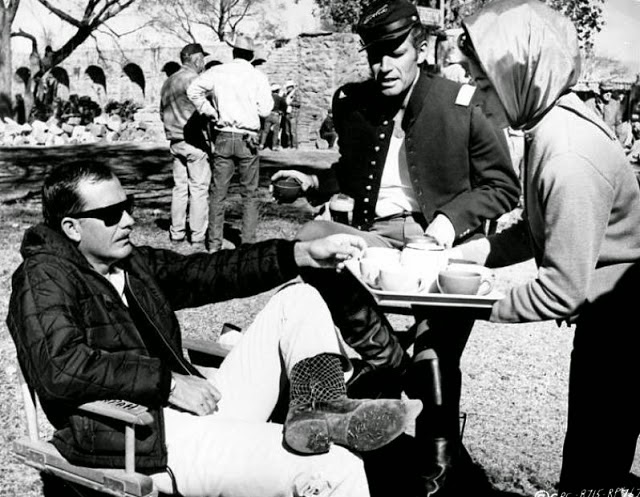 That can't be tea, surely?


The film was slammed by critics and performed poorly at the box office. Peckinpah’s reputation suffered a hammer blow. He lost The Cincinnati Kid to Norman Jewison and didn’t direct another Western till The Wild Bunch. Whether that was because Major Dundee was an artistic mess, the fault of a drunken and over-reaching director and writer, or whether it was because Columbia, furious, savaged it with cuts, as Peckinpah and his supporters claimed, is debatable. James Coburn and RG Armstrong, on the making-of DVD, slam the studio for the cuts, and many others have said the same. Sam himself claimed that the uncut version was one of the best things he did. I’ve seen the 2005 version, supposedly authentic, and as a viewer I’m not so sure. In the uncut version the film tends to be slow and is very long (2 hours 10 minutes). There are scenes which you feel could and probably should have been excised. Less is more, as when an editor forces you to cut 200 words from an article you have written and you think you are forced to sacrifice all the good bits: actually, it becomes a better article.


Sam Peckinpah was certainly one of the genre’s greatest creators but Major Dundee was far from being his finest work. 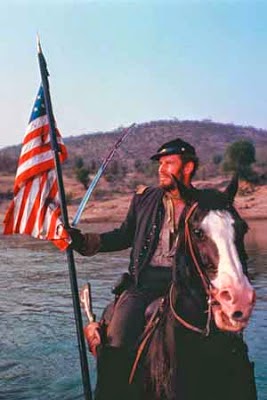 It’s the story of a late Civil War Union expedition into Mexico to pursue Apaches in which Major Amos Dundee (Charlton Heston) is forced to use Confederate prisoners under Lt. Benjamin Tyreen (Richard Harris). The conflict between the two alpha males (very realistic because apparently Harris was always trying to upstage and outdo Heston) is exacerbated by their both falling for Austrian Santa Berger who happens to be in a poor Mexican village. “He is corrupt,” says Dundee to Berger of Tyreen, “but I will save him.” Tyreen is and Dundee does, of course.
They fight French lancers as well as Apaches so there’s no shortage of action. Coburn says that nowadays they have action films but this was a film with action.


As for the principals, I don’t think (though many would disagree) that Harris was ever any good in Westerns except perhaps as English Bob in Unforgiven and it was a pity Anthony Quinn didn’t take the role as planned. And Heston tended to pose and preen a bit, although he does Tough quite well. He was very fine in Will Penny but didn’t otherwise excel. Some of his Westerns (Pony Express, Arrowhead) were really poor. I always think there's something 'sour' about his performances.


However, the support acting is outstandingly good: RG Armstrong is fine (he always was) as a preacher good with a shotgun. Ben Johnson, LQ Jones and Warren Oates are, as usual, splendid as cavalrymen (and adding a Fordian touch to the whole, even if they are Confederates). And, especially, James Coburn is great as the grizzled one-armed scout Samuel Potts. I think he was the best actor on the set. 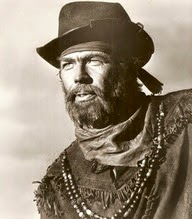 The best actor on the set
Jim Hutton also did a good job with the part of the by-the-book Lt. Graham who learns soldiering and so did Michael Anderson Jr. (a good actor) who was winning as the young Trooper Ryan who narrates the story. Slim Pickens has a sadly small but strong part as a drunken horse stealer and Michael Pate is Sierra Chariba. Pate seemed to have cornered the market in Indian chiefs, rather oddly for an Australian. So, classy acting and a veritable roll-call of fine Western character actors. 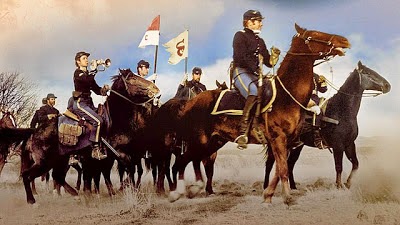 Fordian cavalry
And the extras! It’s cast of thousands. He took two weeks to shoot just the Apache ambush at the river and the biggest army of stuntmen ever then assembled. Sam Leavitt (Peckinpah had wanted Lucien Ballard) did wide-screen color photography of the Durango locations and the restored print shows the quality well. There is some lovely light and long shadow. Some of the music (Daniele Amfitheatrof and Christopher Caliendo in the 2005 version) is original and striking.

There are, um, whatever the opposite of echoes is in the movie that prefigure
The Wild Bunch five or so years later, such as the sad farewell with the band playing as the soldiers leave the village.
Yes, there are clichés and yes, the lead characters are a little bit one-dimensional. Coburn says that Peckinpah was a genius for three hours a day. But all in all it’s a good film and a must-see in either version – or both. But myself I don't think it's a great work of art cut to ribbons.