The Mountie doesn't always get his man 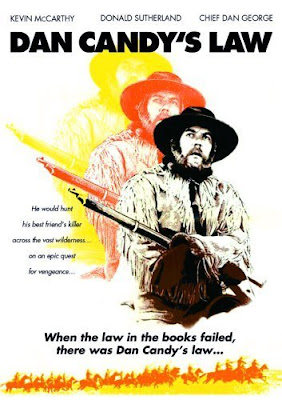 Dan Candy’s Law, also known as Alien Thunder, is not really a Western at all, or at least not by the purists’ standards. It’s an all-Canadian effort filmed in Saskatchewan with people saying owt-howse and so on. Films in which a Mountie always gets his person aren’t really Westerns.
.
Still, we are in the West of North America at some time in the 1890s and it is a straight revenge/chase plot in which a loner hunts an Indian. And anyway, I'm not a purist.

Donald Sutherland, 39, is a post-MASH, pre-Day of the Locust Constable Dan Candy, determined to hunt down a Cree, Almighty Voice (Gordon Tootoosis, whose first film this was) who had shot down Candy’s pardner, Kevin McCarthy. Sutherland, in his only ever Western (until 2012) is at full steam.

And Chief Dan George is in it, as Almighty Voice’s leader, Sounding Sky. This was after Little Big Man and and he hasn’t aged a bit. He looks well under 100. He was a Canadian, of course. Actually, he was 75 and two years later did The Outlaw Josey Wales. He'd started in the Disney picture with Glenn Ford, Smith! in 1969, when he was a mere stripling of 70. He was very fine in everything.


We have Québécois Jean Duceppe as the Mountie Inspector, or Inspecteur, wiz a vary Franche accsont. His boss, the Brit General, is a complete idiot. The acting’s OK.
.
The direction, by another Quebecker, Claude Fournier, is, however, very leisurely, not to say plain slow. Pursuit movies are hard to pace and this one often moves slower than a walking horse. He later went on to greater things, such as directing an episode of The New Avengers. No, that’s unkind. There are some quite moving performances in Alien Thunder and an attempt at atmosphere.

The rotten Mill Creek DVD I saw it on has such a poor-quality print that it’s difficult to pass judgement on the visual aspect of the film, the photography or the color. Difficult, but not, of course, impossible. Old Claude photographed it himself and let us say that it is good in parts.

And actually, at one point Donald says, “I’m just doin’ what I gotta do” so it's a Western withowt dowt.
.