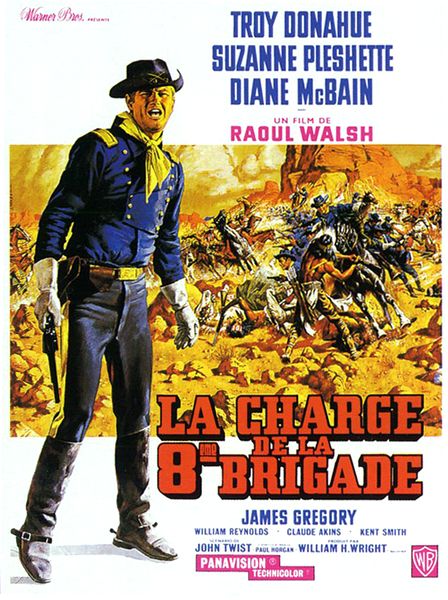 Raoul Walsh was 77 when he directed his last movie, A Distant Trumpet. It was fitting that the director of the rip-roaring They Died With Their Boots On should end with a cavalry Western. Sadly, though, it was a pale imitation.

Warners threw a big budget at it. It was nearly two hours long. It had a huge cast. William Clothier photographed it on location in Technicolor Panavision. It aimed to be a major Fordian classic.

The trouble was the much tinkered-with screenplay, which in the end bore almost no resemblance to the original Paul Horgan novel and contained every cliché under the Arizona sun. And it was not helped by the casting of low-budget movie and TV stars such as Troy Donahue, unconvincing as a tough lieutenant (a Mexican washerwoman has to say “Que hombre macho!” as he passes so that we know) and sub-Elizabeth Taylor starlet Suzanne Pleshette as the married lady he falls for. They are both weak.

Another fault is the brassy one-theme score by Max Steiner which after two hours’ repetition becomes plain irritating.

Visually, it’s a feast because Clothier was a fine craftsman and the Painted Desert and Red Rock State Park locations are wonderful. Happily, studio sets are kept to a minimum (though the hero Matt Hazard – who thinks up these names? – does find a convenient cave in a studio in which, daringly, to spend the night with Kitty).

James Gregory is the pompous, Latin tag-quoting ass General Quaint who patronizes everyone and lords it over the West and President Arthur. If he was supposed to be an unsympathetic oaf, he acts very well. Claude Akins is about the best of the cast (as he often was) as the odious Indian agent Seely Jones.

The Indians are caricatures and wear their war bonnets and paint all the time, even for lunch in their mountain retreat. The authenticity is down to “Military Consultant and Advisor Capt. J.S. Peters, USA, Retired”. He must have been very retired.

Kitty Mainwaring (la Pleshette) wears period costume. It looks late 50s. The trouble is, it’s the 1950s. And her make-up and hair are distinctly early 60s.

The language is anachronistic (“Every man will wash their barrack”).

The ‘prairie sweepstake’ is quite fun (though stolen from Destry) and there’s one good line. When Kitty and a furious Matt are watching the soldiers debauch themselves with painted harlots, whisky and dancing, she asks him if he is “burning while Rome fiddles”.

I keep imagining this film with John Wayne and Henry Fonda in front of the lens and John Ford behind it. It could have been fine. As it is, it’s worth a look but is very much second-league stuff.