The Smithsonian of the West
.

Almost exactly a year ago, I was touring the magnificent states of Wyoming and Montana.

My pard-ess and I visited Yellowstone and were duly impressed, then leaving the great park (with regret) we descended the highway called by President Theodore Roosevelt “the most beautiful 50 miles in America”. He was wrong, actually (or he may have been right then). It was certainly beautiful but we were to see better. The road winds across the Shoshone National Forest down to the town of Cody.

In 1895 a group of entrepreneurs asked the great Col. William F Cody, Buffalo Bill, if he would be the patron of a new town which would be named for him. He took it seriously and helped in the town plan and built a fine hotel there which he named after his daughter, the Irma Hotel. The Irma is now a busy, thriving place, packed with bikers (when I was there) and other guests but retaining its 1890s charm and appearance, with tin ceiling and heavy rosewood fittings.
. 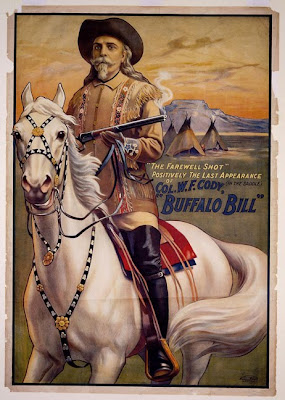 Cody is a good little town, an honest-to-god Western place, not the twee, chi-chi version of the West offered by Jackson Hole. People really do herd cattle on horseback and look natural in cowboy hats. There is an old town made up of cabins reassembled from parts of the region, including the cabin and saloon frequented by Butch Cassidy and his Hole-in-the-Wall gang (south west Wyoming was their stamping ground). The old town is well-presented, not touristy or falsely done up, just a street of rough wooden buildings with an air of authenticity.
.
After leaving, I read that the founder, a Mr. Bob Edgar, was a crack shot and had drilled the centre out of an ace of spades held by the guidebook writer. We had met a polite older gentleman there and I wondered, could that have been Bob? I wanted to buy a pack of cards and go back up and ask. How cool would that be, to go home with an ace shot through? Of course he might have missed and shot me through but heck, a Western fan’s gotta do what a Western fan’s gotta do. Anyway we didn’t go back. We went to the Buffalo Bill Historical Center. 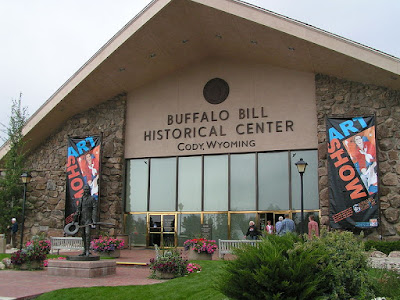 Called “The Smithsonian of the West” (though the Gene Autry Western Heritage Museum in LA would have something to say about that), it really is a splendid institution. Modern and visitor-friendly, it has a fine collection on display. It is really 5 museums in one because it has separate wings dedicated to Cody himself, Native Americans, the history of firearms, natural history and, the best in my view, a gallery of Western art of all kinds. All the great Western artists are represented, Frederic Remington of course (there is also his complete studio) but others too, such as Charles Russell. I chose (I always choose one item from museums to take away with me come the Revolution) a huge painting by Thomas Moran of the Grand Canyon of the Yellowstone.

In the firearms section there was the Winchester used in Winchester ’73. In that film, you will recall, there is a shooting contest to win the great Winchester 1873 model and James Stewart has to beat his brother in marksmanship. Remarkably, there was a real sharpshooter just off camera who really did plug the coins thrown up by Will Geer as Wyatt Earp (no special effects in those days). The actual gun was there with the signatures of the cast members (“Jimmy Stewart”) carved into the stock. I think I may take that instead of the painting.
. 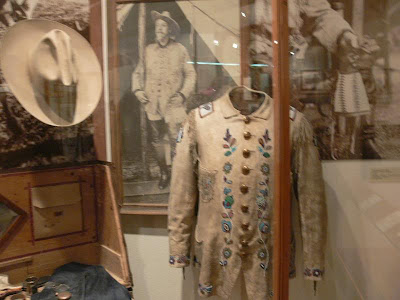 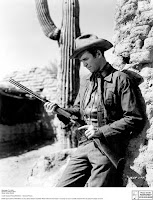