If Jim Bowie had been an immaculately dressed New Orleans gambler with elegant manners, Alan Ladd would have portrayed him very well. Unfortunately he wasn't, and The Iron Mistress is little more than a top hat and sword romance. 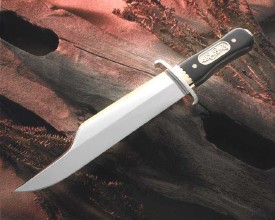 The title of the film refers of course to the famous knife (forged with a substance from outer space – I kid you not) and we get the rigmarole about how the greatest blacksmith ever created this mythical weapon to Bowie’s design. The knife ends at the bottom of the Mississippi as Bowie renounces violence to marry the sweet daughter of the Vice-Governor of Texas. But the title also refers to Virginia Mayo, who is supposed to be Judalon de Bornay, the beautiful but scheming and faithless woman with whom Bowie is in love. In fact Mayo manages the scheming and faithless part quite well.

(Oh dear, I fear that was unkind).

Then we have horse races and New Orleans casinos and Mississippi river boats and duels. In fact, it’s not a Western at all. It’s an early nineteenth century costume drama.

Still, some attempt at accuracy is made. Bowie was indeed a land speculator in Louisiana, as shown, and did participate in a duel which degenerated into a brawl in which, shot and stabbed though he was, he stuck his famous knife in the sheriff. And he did marry the Vice-Governor’s daughter. It ends before the San Saba expedition, the Grass Fight or the Alamo, though, and historical accuracy isn’t taken too far.

I’ve spoken elsewhere of Ladd’s unsuitability for the Western genre and I won’t repeat it. Read my reviews of his other Westerns (or true Westerns) such as Whispering Smith, Branded or Shane. He comes across as such a nice man, gentle even, but about as far removed from a true Western hero as you can get.

The support acting is alright. Most of them are unremarkable stock studio character players. Joseph Calleia was the best (he was an excellent actor) as Juan Moreno, with third billing after Ladd and Mayo.

It was written by James R Webb from a Paul Wellman novel. Webb had specialized in low-budget Westerns like Jesse James at Bay or Bad Man of Deadwood. The script here is of a similar standard. Only the knife fight in the darkened room stands out.


Gordon Douglas directed it and he did some interesting stuff occasionally (though a lot of bread-and-butter work too).


The cinematography by John Seitz is quite good and the colors are brilliant.

You could do worse on a wet evening if it comes on TV. But...