You can be anything you want 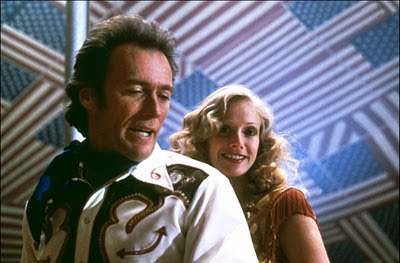 “Are you for real?” Antoinette Lily asks Bronco Billy. “I am who I want to be,” answers Billy. Later, the ‘Indian’ trouper Running Water tells Lily, “You can be anything you want.” And that, essentially, is the message of this rather unusual but amiable little film.
.

It is amusing that along the long trail ridden by Clint which led from TV cattle-drive sidekick to spaghetti grunter, Westwards to classy Western director, finally arriving at Fordian greatness with Unforgiven, he tarried a while at the end of the 70s to make this pastiche post-Western full of naïf charm.

Bronco Billy McCoy is a former shoe salesman from New Jersey and Folsom ex-con but now he roams the West with his traveling show. He has to recruit round-heeled gals in each town because his aim with gun and knife isn’t that good and they don’t last long. By accident he hires haughty heiress Sondra Locke and things start to go wrong. But of course now we are into classic ‘cowboy and the lady’ territory and the story takes off. As required by this theme, a tough Western man finally tames the uppity dude woman. Feminists beware.

The casting is exquisite. Scatman Crothers is the ringmaster, Doc, Bill McKinney the hook-handed Lefty, Sam Bottoms is the young roper and Dan Vadis and Sierra Pecheur are the troupe’s Indian couple. All are misfits and outcasts, intensely loyal to Billy, who took them in. Walter Barnes is splendidly menacing as the corrupt sheriff and Geoffrey Lewis hilarious as the crazed husband of convenience of the heiress. There’s even Hank Worden (aged 79) as a gas station attendant. Billy’s horse Buster nearly steals the show.

Eastwood is, as both director and actor, quietly superb.

There is a (one imagines deliberate) cheesy ballad over the titles but there are some decent Merle Haggard country tunes along the way (he leads the band in a bar).The David Worth photography of the Idaho locations is excellent in giving us the heartland West of 70s America as it really was – or ought to have been.

The Dennis Hackin dialogue is sometimes outstandingly good. The characters manage to speak almost entirely in clichés without ever seeming corny. How Hackin and the actors did that, I don’t know, but they managed superbly.

Bronco Billy is an often funny but also wistful and melancholy picture which plays on Western nostalgia and preaches motherhood and apple-pie virtues without pomposity or falseness. It was one of Eastwood’s own favorites and we can understand why. Most definitely worth a purchase.
.

And just for fun, here on the left is a picture of the real Broncho Billy.