It ranks high in the Cooper canon. 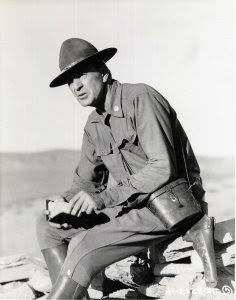 This is far from an action movie. It’s not even certain that it’s a Western. Set in Mexico in 1916, during Pershing’s ill-fated expedition to punish Villa for his attack on Columbus NM, it tells of an increasingly tense expedition led by Major Gary Cooper in which it turns out that the men he is recommending for medals for bravery are less than model soldiers and he, Cooper, branded for cowardice at Columbus (for he yet again plays a man with a shady past), turns out to be the bravest of them all.

It’s a psychological Western and slow moving (they rode, they walked, then in fact they staggered to Cordura). These 'journey pictures' only work if the writing is top notch and the acting too. Happily, both conditions are met in this film.

Written by director Robert Rossen and Ivan Moffat (mostly a war film writer, and They Came to Cordura is in fact as much a war film as it is a Western), and based on a novel by Glendon Swarthout, whose stories were also the basis for the pictures 7th Cavalry in 1956, The Shootist in 1975 and The Homesman in 2014, the screenplay is subtle and powerful at the same time. The characters of the men, ‘heroes’ and ‘coward’, slowly develop until they change places. Cooper is stunningly good (as he nearly always was) and of the medal nominees, Van Heflin stands out as the vicious sergeant. It is one of his finest roles. He had been very solid in 3:10 to Yuma and Shane but in neither Western did he achieve what he does here. He was under fifty but looks more, broad in the beam but tough as all get out.

The beautiful, graceful Rita Hayworth, who had been acting since the late 1920s, is also very fine. She is a scandal-ridden American woman, alcoholic, accused of collaborating with the Mexicans. She detests the men, including Coop, but also gradually changes, or gradually has her eyes opened. 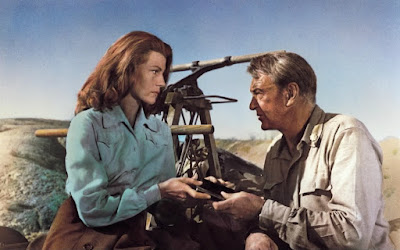 It is a fascinating study of courage and cowardice. The men commit acts of extraordinary bravery in the heat of battle. Cooper is desperate to find out how and why, and he torments them with questions. They simply don’t know. They just did it. But what they don’t have is that other courage, the stamina to endure a long ordeal. And Coop has that in spades. In the end the heroic lieutenant makes a cowardly attack and the coward of Columbus shows them all what real courage is. It’s very moving.

It’s probably a man’s film, more of a macho war film than a Western, but with acting and writing of this caliber and being a picture as visually attractive as this one is (lovely Cinemascope photography of Mexico and Utah locations by Burnett Guffey), it ranks high in the Cooper canon. It was his last Western and he was to die in ’61. Cooper was one of the greatest, perhaps the greatest of all Western stars and when you watch this film you see why. He was unwell during filming but did a great job.

They staggered to Cordura

There was supposed to be an implied homosexual relationship between the Cooper and Tab Hunter characters, an aspect that shocked and revolted John Wayne. I may be obtuse and I don't have very good what they call gaydar, but I didn’t see it. Actually, I don’t even think Coop saw it. It is said that he tried to get Tab Hunter to date his daughter. A less homosexual man than Cooper it would be hard to imagine. Wayne also disliked the “lack of patriotism” and indeed, there is something cynical about the medal ‘industry’ as portrayed. The cavalry charge early in the film is incompetently ordered. The army shouldn’t have been there anyway.

Writer Moffatt wanted Cooper to wear eyeglasses. Producer William Goetz looked at Moffatt and said, "Do you see that painting on the wall? It's a Picasso. I'd very much like to keep it. That's why Cooper won't wear glasses in the picture."
It’s a fine film and, Western or not, a magnificent picture.