No wonder half the (male) world fell for her 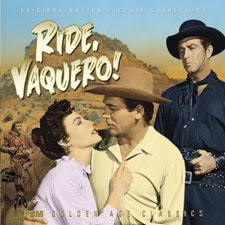 I have just re-watched Ride, Vaquero!, an MGM offering of the early 50s.

Following one of the basic principles of this blog, namely Never trust a Western with an exclamation point in the title, this movie starts badly.

In fact, pards, it is not so much a Western as a heavy-breathing period Romance. Not a good sign, huh? At the centre of it there is a curious love triangle, or, thinking about it, a quadrilateral.

You see, Howard Keel loves Ava Gardner. They are rich ranchers in Texas just after the Civil War (although of course the costumes and guns and so forth are all, as always, 1950s-imitates-1880s). Robert Taylor arrives on the scene, looking curiously old-fashioned, like a cross between Rudolf Valentino and Tom Mix, over-made up and in dudish costume and gunbelt. Of course he falls for Ava. And vice-versa, let it be said. The trouble is, Taylor is already promised to Mexican bandit Anthony Quinn. Yes, it’s Warlock ante diem. Hollywood daringly suggests a homosexual relationship between Quinn and a famous star (Henry Fonda, of course, in Warlock). That’s how the triangle becomes a square.

So, will Robert remain faithful to Anthony or desert him for the (let’s be honest) stunning Ava? No contest, pards. Ava wins it hands down. What an actress she was! Far more than an actress, a presence, a power. No wonder half the (male) world fell for her. They were right to do so. The moment she appears, getting off the train in a dove-gray bolero with pointy breasts, you (if you are a man anyway) go, “Wow!” (Female readers, please excuse this excursion).

Howard Keel was MGM’s tame musical star and here he is totally out of his depth. Ava too, though ineffably Ava, is hardly convincing in a Western. Lucky, then, that Quinn and Taylor were on the set - Quinn because he had license to overact as dashing, debonair mustachioed bandit with vip and flair, and Bob as the strong, silent type. Matinée idol Taylor did a good line in tough Western good-bad man. Here he admirably offsets Quinn and, thanks to the classy writing (Brit Frank Fenton, later to do the seriously good Escape from Fort Bravo and Garden of Evil, so a real talent) Taylor delivers some terrific lines. He reminds me of what Lassiter should have been, if you have ever seen a version of or read Riders of the Purple Sage.

Let’s not forget Jack Elam. One-Reel Jack, as chief henchman of Quinn, survives this time into the last reel before Taylor guns him down. He looks rather dashing in a mustache, although Taylor rather unkindly, if accurately, describes his face at one point as, “The only place where a smile could be ugly.”


There’s a sickly-sentimental priest (Kurt Kasznar) who makes you want to throw up and a straight middle-aged sheriff (Ted de Corsia, one of my favorite Western character actors).

The music (Bronislau Kaper) is over-the-top and makes you think of corny 1930s King Kong-type capers.

However, one thing must be said: the movie is photographed by Robert Surtees. Now, that means that, a priori, it is visually beautiful. I have said elsewhere (and I daresay not only once) that in my view Bruce Surtees, the son, was one of the greatest of all Western cinematographers. He was a genius. Robert, the father, was sound and occasionally very good. There is quality. Utah locations, cavalry, buttes, ‘Rio Grande’, there's a John Ford look about it. There are some stunning shots.


Do not discount this film.