Not great Westerns but not bad either 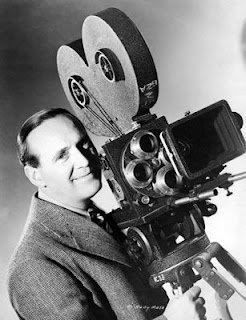 I thought we could maybe add Rudolph Maté to our roll-call of Western directors.

He wasn’t one of the greatest, by any means, but he did direct seven feature Westerns (and an episode of Zane Grey Theatre) for the big studios, starring the likes of Alan Ladd, Tyrone Power, Glenn Ford, Fred MacMurray and Charlton Heston.

Maté was born Rudolf Mayer in Kraków, then part of the Austro-Hungarian Empire, in 1898. After graduating from the University of Budapest, he worked as a cameraman in various European countries from 1919 on, becoming one of Europe’s top cinematographers. In 1935 he moved to the US and worked on a Laurel and Hardy picture, for Alfred Hitchcock on Foreign Correspondent, for Alexander Korda on That Hamilton Woman and for Charles Vidor on Cover Girl. So he was a leading (non-Western) cinematographer and indeed he holds the record for the most Oscar nominations (five) in a row without winning.

A younger Maté, when he was still Rudolf Mayer

He got an introduction to our noble genre in 1940 when he worked as a cameraman under the great Gregg Toland on the William Wyler-directed The Westerner. He was first given a chance to direct in 1947 and after the successful noir D.O.A. his sixth movie as director was Paramount’s Western Branded, starring Alan Ladd. Ladd was not (in my view) an entirely convincing Western actor but he tried hard to capitalize on the great success of Shane in 1953, and appeared in a series of oaters through the rest of the 1950s, some of them, frankly, pretty ordinary. Branded wasn’t bad and it was visually fine - Maté used as cameraman Charles B Lang Jr. (“Ah, Charlie Lang, one of the great ones,” as James Coburn used to say) and the story, by pulpmeister Max Brand, rattled along at a good pace, but as a  50s big-studio Western it was little more than average.

Three years later Maté directed big star Tyrone Power in The Mississsippi Gambler. Only a Western by a stretch of the definition, the picture is a romantic costume-drama which is quite enjoyable in an old-fashioned way. Set mostly among the super-rich of New Orleans in 1844, it tells of elegantly attired gentlemen fighting duels, beautiful spoilt-brat daughters in crinolines, caddish younger sons and fortunes lost at cards on riverboats. The sets and décor are slick and fancy, there’s fine glossy color photography by Irving Glassberg, and the whole thing has the mid-to-good budget sheen of Universal movies of the period. 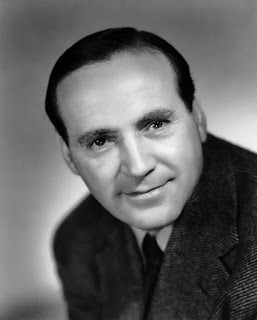 Rudy in his (Western) prime

Maté’s next Western was for Fox in 1954, The Siege at Red River. It was unusual as a Western in that it starred Van Johnson, better known as an MGM song-and-dance man. It’s a Civil War tale of a villain selling a Gatling gun to the Indians, who use it in an attack on a fort. If Van wasn’t quite the man, fortunately this villain was none other than the great Richard Boone, and wonderfully, snarlingly villainous he is too. Once again the picture is visually attractive, with some great scenes - note, for example, the wagon being chased by horsemen in the dust, with a mesa in the background; it’s a great shot. It was photographed in Technicolor by Edward Cronjager, a true master (he’d done Western Union for Fritz Lang and Canyon Passage for Jacques Tourneur) in wonderful Utah locations, in Castle Valley and along the Colorado River. The climax battle scene is pretty spectacular. 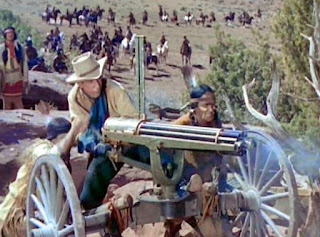 The following year Maté helmed two Westerns, The Violent Men for Columbia and The Far Horizons back at Paramount. Though the first is not up there with the greats it is still my favorite Maté Western. On the surface a melodramatic tale of range war, passion and lust, The Violent Men (aka The Bandits) is saved by the very powerful performances of the principals and, once again, the visual quality of the picture. Edward G Robinson on crutches is a cattle baron and Barbara Stanwyck is his imperious wife who is two-timing Edward G with his brother, Brian Keith (excellently slimy in hair oil and thin moustache) who is himself two-timing Stanwyck with a Mexican spitfire. But the best performance comes from the excellent Glenn Ford. He is absolutely superb as the man who doesn’t want to fight but when forced to it brings military skills to the conflict. It’s an exciting Western which gallops along and is well directed.

The Far Horizons, however, a Lewis & Clark saga with Fred MacMurray (Lewis) and Charlton Heston (Clark), was a bit of a clunker. Paramount splurged a bit on this picture with big stars, VistaVision and Technicolor (though it was later re-released in black-and-white) and handsome Wyoming locations. That’s about where the spending stopped. Still, the movie did create a stir as a ‘big’ picture. It’s historical hooey (Time magazine rated the picture as one of the top ten most historically misleading films) but you can’t hold that against a Western. The problem is not that but the pacing and general stodginess. The Hans Salter score is occasionally vigorous and stirring but that’s about the only element of the film that is. DP Daniel Fapp tried to make the most of the Grand Teton scenery but was hamstrung by the overuse of studio sound stages. Donna Reed is unconvincing in heavy make-up as Sacajawea (as she is called here), doing her Debra Paget act. She and Clark have a romance, desired by producers William H Pine and William C Thomas (known as the Dollar Bills). It’s all rather a farrago. 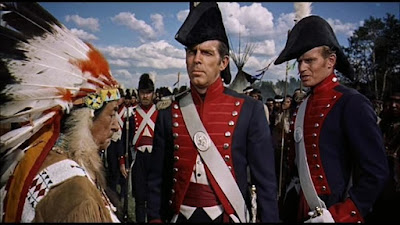 A bit of a clunker

Two Westerns remained in Rudy’s career, both in 1956, The Rawhide Years at Universal, with a star they were trying out in the saddle though it didn’t really take, as it turned out, Tony Curtis, and Three Violent People, once more for Paramount, and once more with Charlton Heston.

The Rawhide Years, released in June ’56, was standard fare but quite fun. Arthur Kennedy had the charming-rogue part. The chief henchman is my hero Robert J Wilke. There’s a good bit with a derringer in a garter. There are shoot-outs and explosions and fistfights, and a whodunit murder story (though you don't need to be Columbo to work out who is the guilty party). There are nice Technicolor shots of Lone Pine locations (Universal’s Western go-to Irving Glassberg behind the camera, of Bend of the River fame). It’s fun, really. 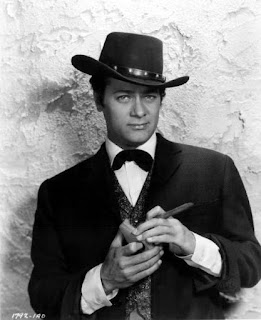 They were trying Tony out in oaters

As for Three Violent People, it is never quite clear who the trio of aggressive persons of the title are. There are so many violent people in the story. It was Heston’s fifth Western in a leading role. He always seemed sour and even sadistic in them to me. I never warmed to Mr. Heston, I’m afraid. I'm sure he was a nice fellow and all. It’s a rather silly Reconstruction story. For me Anne Baxter was the best thing about this rather dull picture. She was always good in Westerns. She does the saloon gal on the make transforming into loving wife and mother with aplomb, in fact much better than the James Edward Grant script deserves. The New York Times commented: “Miss Baxter looks lovely, intelligent and uneasy throughout the whole business.” 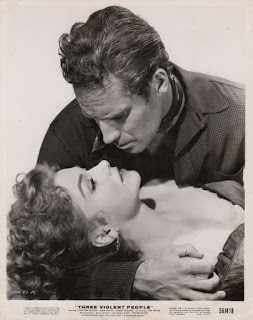 And as far as big-screen Westerns went, that was all she wrote. Maté did that Zane Grey episode in 1960 but otherwise concentrated on 300 Spartans and The Loretta Young Show. No one would claim greatness for Rudolph Maté, as a director of Westerns anyway, I mean John Ford he wasn’t, but you know, he turned out a decent oater, mostly. That’s no small thing, I’m sure you will agree.

Rudolph Maté had a heart attack and died in LA in 1964.