Allied Artists had been born from low-budget outfit Monogram, which produced pictures, including many Westerns, on a typical budget of only $90,000, but now wished to move upmarket and put out bigger ‘A’ movies. Oregon Passage was an 80-minute effort in Color DeLuxe and CinemaScope, and was typical of AA’s product at the time. It didn’t do much at the box-office and certainly could not match that year’s hit Gunfight at the OK Corral, but it got some reasonable reviews, and it’s a mildly enjoyable, if pretty standard, cavalry Western. 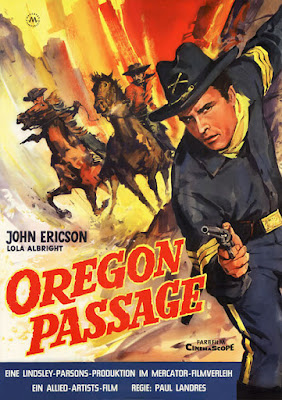 The cast wasn’t exactly stellar, and was headed by John Ericson, the nervy hotel clerk in Bad Day at Black Rock (he had a contract at MGM at that time), then topping the billing as Jack Slade’s son in AA’s The Return of Jack Slade, and being Brookie Drummond in Samuel Fuller’s Forty Guns the same year as Oregon Passage. You wouldn’t call him a big star, but he does the job competently in Oregon Passage as the young lieutenant who understands the Indians but has to deal with a martinet by-the-book commandant from back East. 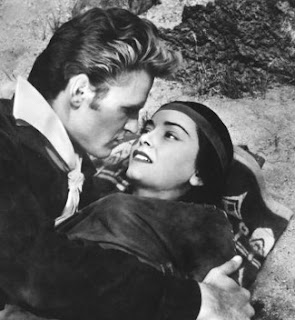 For though you might assume from the title that we are in for an Oregon Trail wagon-train story, in fact it’s a rather conventional and very sub-John Ford soldiers v. Indians tale, screenplay by Jack DeWitt (slightly stodgy oaters, Canadian Pacific, Sitting Bull, A Man Called Horse, Gun Belt being about the best) from a novel by Gordon D Shirreffs, who wrote a good many Western novels and short stories in the 50s and 60s. 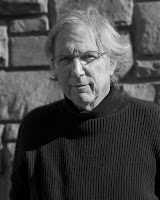 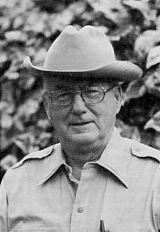 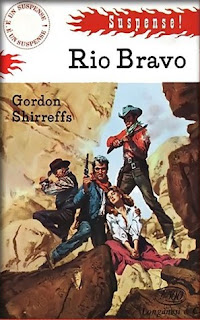 The young officer wise in the ways of the West versus the rigid commander from Washington who doesn’t understand the frontier at all and is only interested in spit and polish was one of the oldest plots going, and of course no one had done it better than John Wayne and Henry Fonda in Fort Apache in 1948. Oregon Passage isn’t a patch on that, not even in the same league. But it’s OK, and the Oregon scenery is very nice (it was shot in the Deschutes National Forest).

The director was workhorse Paul Landres, 31 feature Westerns, many of them low-budget, Last of the Badmen with George Montgomery and The Tall Trouble with Dale Robertson probably being the best. 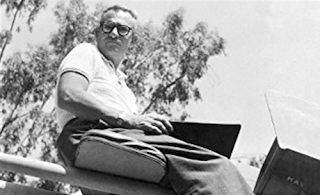 Paul at the helm

The picture was produced by Lindsley Parsons (1905–1992), who produced Monogram Westerns all through the 40s and 50s, probably the best being Jack Slade in 1953, a noirish little oater of some quality. Parsons is also credited as assistant director on Oregon Passage. 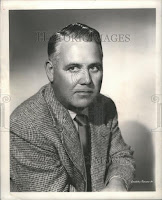 It is a tale of Black Eagle, played by sixth-billed HM Wynant, who had six months before been Crazy Wolf in RKO’s Run of the Arrow (director Samuel Fuller had changed his name from Haim Winant to HM Wynant). He did a lot of Western TV work though only four features. Black Eagle is definitely the villain in this picture. In intro text he is described as a fanatic, and the only obstacle to peace in the region. In reality, Wahweveh (? - 1879), called Black Eagle by the whites, was a leader of the Oregon Walpapi Paiute (related to the Shoshone). He was a war chief in the final phase of the series of fights known to history as the Sheepeater War of 1879. 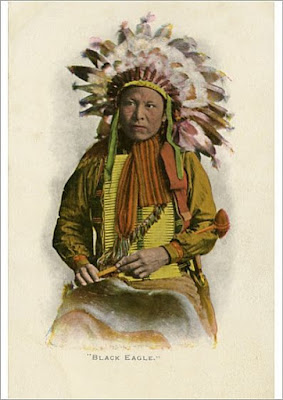 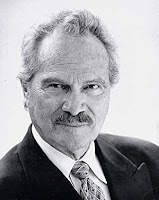 In the summer of 1878, news of a new Tukadika (Mountain Sheep Eater) Snake outbreak in Idaho drew Wahweveh and his Hunipui (Bear Killer) Snake dog-soldiers into the fight. On their way, on July 4, Wahweveh/Black Eagle and his warriors attacked four heavily laden supply wagons at La Grande. They destroyed the wagons, killed and mutilated their drivers, and scattered the freight. It didn’t last long. On August 13, 1878, more than 60 warriors, including Wahweveh, rode into the Malheur Indian Agency and were arrested after they surrendered to American troops. Many of these men were shot but not Wahweveh. Lieutenant Colonel James Forsyth reported that his troops had killed Wahweveh on July 31, 1878. However, in spring 1879 it seems that Wahweveh and medicine chief Tamanmo (Black Spirit), with a few Snake dog soldiers, raided a mining camp on the Oregon-Idaho border and killed several Chinese laborers.  It appears that Wahweveh/Black Eagle was finally killed in late August 1879 on the south fork of the Salmon River. For some reason the movie is set in Oregon in 1871.

Of course Western movies have little interest in showing historical facts. They are not documentaries, and nearly always played fast and loose with history. That’s OK. At least in this picture Wahweveh/Black Eagle is allowed to speak his own language (I don’t know how authentic it was) and isn’t relegated to what I call Ug-speak. So many American Indians in these movies talked in a demeaning “Ug, me big chief” kind of way. 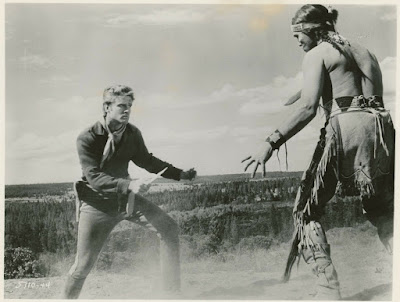 Probably the best actor on the set, and with the most colorful part, was Paul Fierro as the Indian scout Nato. Fierro was a regular Western villain (Indian or white) on TV, though he was a little part of Western movie history in 1948, when John Wayne shot him in Red River to claim the land his master said was all his. When I say “the best actor” it’s only relative, and the DeWitt writing is clunky enough that he can’t really emerge as an especially interesting character. 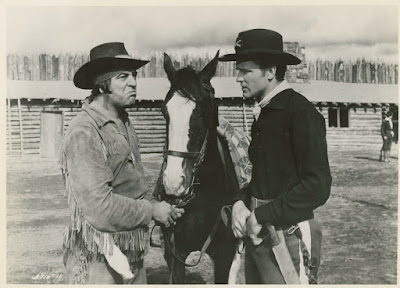 Fierro was the scout

The worst acting (sorry but it’s true) comes from Toni Gerry, in her only Western, as the Indian girl Little Deer, who, in 50s cosmetics flirts with a couple of the lieutenants in the fort.

Good old Edward Platt is the crusty commandant from DC (most cavalry westerns had to have one), Major Dane. Platt is probably best remembered for Get Smart and his part in North by Northwest but he did quite a few Westerns, big screen and small, and you may recall him in the likes of Bullet for a Badman, Gunman’s Walk or The Proud Ones. In Oregon Passage he has a flighty blonde wife, Sylvia (Lola Albright, her biggest Western parts in Pawnee and The Way West) who previously, before she married the major, had a fling with the young Lt Ord (Ericson) and now, on the remote frontier fort (which looks very like Kanab) has the idea of renewing the lovey-dovey. The gallant lieutenant is first tempted but soon realizes she is manipulative and shuns her in favor of the fair Little Deer.

Most of the plot is pretty predictable, though there’s quite a good bit in a graveyard outside the fort, where the shrewd lieutenant places riflemen, knowing that the foe are too superstitious to enter. They thus rain flanking fire down on the attacking braves and win the day. The pigheaded commandant gets his just deserts. Naturally there’s a 1:1 final single combat between the hero and Black Eagle, and you may well guess who wins. It all ends with the expected amour.

Paul Mavis on DVDTalk said it was drab and dull, calling the action tame and the script threadbare. Brian Garfield also used the word dull.

Myself, I didn’t mind this Western. It whiled away a pleasant 80 minutes. Don’t expect greatness but you could give it a go.