Revenge at all costs

Henry King started as an actor in silent movies, for example topping the (limited) cast list in The Apache Kid (1913), then got into directing silent Westerns. Later, in other genres, he would be nominated twice for the Best Director Oscar and he directed seven films nominated for Best Picture. He worked a lot with Gregory Peck and Tyrone Power at Fox. He didn’t do all that much in the Western genre in the talkie era but he helmed Fox’s Technicolor  Jesse James with Power in 1939, a big hit, and he followed that up with two seriously classy Westerns in the 1950s, The Gunfighter (1950) and The Bravados, both with Peck. It is said that Edward Dmytryk was to have directed first but for some reason the project passed to King, then 70. 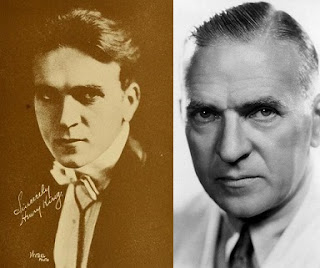 King as actor, King as director

Gregory Peck was, for me, one of the great Western actors. OK, yes, he appeared in the odd pretty bad picture (Mackenna’s Gold, How the West Was Won) but which actor didn’t do the occasional dud? I can think of trashy Westerns featuring John Wayne, Clint Eastwood, Henry Fonda, James Stewart, even (gasp) Randolph Scott. But when you consider Westerns such as Yellow Sky, The Gunfighter and The Bravados, you realize what a superb Westerner Peck made. Tough, taciturn, determined, with that gruff voice and steely glare, he was one of the top men at his craft. 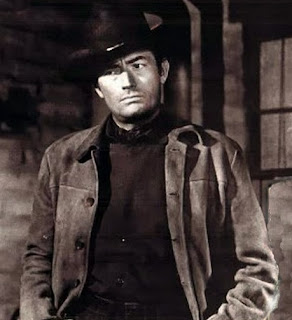 Fox threw budget at it and it was in CinemaScope and Technicolor (whereas The Gunfighter had been more of a ‘chamber piece’ in a somber black & white). Shot in Mexico's Michiocan and Jalisco provinces by talented Leon Shamroy (who also photographed Buffalo Bill for William Wellman) it makes the most of the handsome locations and also makes much use of day-for-night photography and silhouette. 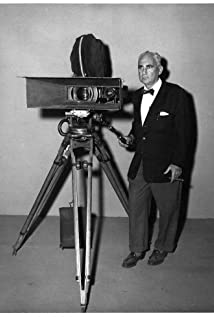 It was certainly well enough received. AH Weiler in The New York Times at the time called it a “tense and grown-up example of the genre” and said it was “executed intelligently in fine, brooding style”. Though at the box-office it couldn’t match Peck’s other big Western that year, The Big Country, released in August (The Bravados in June) it still did respectably commercially speaking, grossing $4.4m and selling 6.4m tickets. The Bravados is probably a better Western than Wyler's The Big Country.

It’s a grim and tough pursuit drama with a strong, I’d almost say heavy-handed moral message about the futility and wrongness of revenge. It is marred (in my view but I suppose it depends on your standpoint) by this message being couched in very religious terms, and there is a lot of religious guilt and angst about, which Fr. Andrew Duggan tries unsuccessfully to assuage, and also some especially cloying scenes of very Roman Catholic liturgy, with a highly ornate (dare I say kitsch?) Virgin Mary staring down at the characters, a village church the size of a cathedral and a huge choir for such a small town - they were the The Niños Cantores De Morelia Choral Group, sorry, boys, but screeching, frankly, like Hollywood angels with sore throats. It was an absolute din. King was a Catholic convert and clearly wanted to highlight this side of things.

They go to church a lot

Another weakness was the sub-plot about Joan Collins falling in love with the hero. As an actress Ms. Collins would have made a great shop-window mannequin. She is perfectly awful and you can see Gentleman Gregory politely avoiding squirming when acting with her. Calling her performance wooden is far too flattering. Actually, the whole love-affair should have remained on the cutting-room floor. It got in the way of what was a pretty gripping drama, and the final scenes of Joan and Peck’s little daughter are so sickly-sweet as to induce nausea.

But these quibbles aside, The Bravados is, as Brian Garfield said, “a superior and often quite moving Western.”

Set in and around a (fictional) New Mexico border town, Rio Arriba, the story tells of rancher Jim Douglass, who rides in to witness the public execution of four men he identifies as two whites, a half-breed and an Indian (you sense he has ranked them in order of worth) who raped and murdered his wife. They have been arrested and condemned for another crime but Douglass wants the grim satisfaction of seeing them hang. 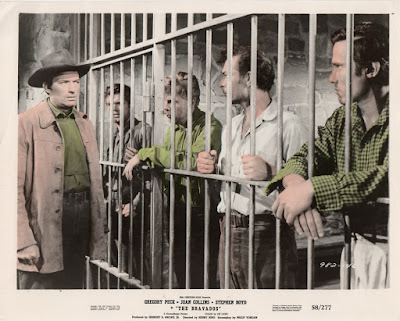 He stares at the men who murdered his wife

At first they take him for the hangman from Silver City, but that portly gentleman (Joe DeRita, uncredited) duly arrives, and seems more eager to imbibe and smoke cigars than examine the newly-built gallows (it’s the town’s first hanging) or weigh up the condemned men. It soon transpires that he is an impostor, and in league with the criminals. He stabs the sheriff (Herbert Rudley) in the back (literally) and engineers the escape of the criminals, though he himself is shot plumb between the eyes in so doing. The fake hangman wheeze would be copied in the not-very-good Bandolero! (1968) when James Stewart did the honors.

The four ne’er-do-wells are (in the order Douglass listed them) Zachary and Taylor, though I don’t think either was related to the general (Stephen Boyd and Albert Salmi), the half-breed Alfonso Parral (Lee Van Cleef) and the Indian Lujan (Henry Silva). Boyd was a Northern Irishman who did quite a few Westerns, especially Euro ones (you may remember him from Shalako) and is quite convincing. Salmi was presented with the Western Heritage (Wrangler) Award from the National Cowboy Hall of Fame for his role in a 1955 Gunsmoke episode, so must have been proud; he was in over 50 episodes of different Western TV shows, almost invariably as a heavy, and also appeared in eleven feature oaters, notably The Unforgiven and Hour of the Gun. Van Cleef needs no introduction as Western badman; this was his 60th Western appearance in a career that would approach 200. And Silva would in the 60s make it big in spaghetti westerns but had appeared in quality pictures first such as this one, Viva Zapata and The Tall T and would go on to do others such as The Law and Jake Wade; I think he was rather good in the genre. In The Bravados he is the shrewdest and most skillful of the bandits, almost the boss, despite his ethnicity.

The town organizes a hasty posse, especially because the villains have kidnapped the storekeeper’s daughter Emma (Kathleen Gallant) and taken her with them. But Douglass is wilier. He stays to sleep before following the outlaws and is much more calculating and cold-blooded about it all.

The rest of the tale, and two-thirds of the runtime, deals with the pursuit. Twice the badmen leave one of their own to hang back and bushwhack Douglass, and twice the would-be assassins are dispatched without mercy. Now only Lujan and Zachary are left, with their hostage. They are making for the border.

It was written by Philip Yordan from a Frank O’Rourke novel. O’Rourke was best known for his baseball books but also wrote a goodly number of Westerns. Yordan was a distinguished writer of screenplays and is noted (by us Westernistas) for the likes of Johnny Guitar, The Man from Laramie and Day of the Outlaw, quality pictures all. 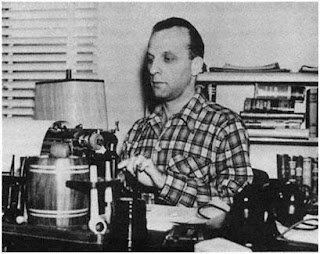 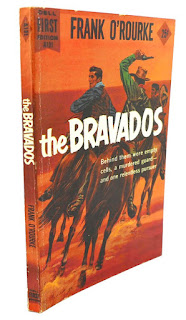 ...who changed the book a lot
Yordan didn't much like the finished movie. He said, "The picture didn't work. King was too old. It didn't come across the way it should have." But I am not alone in disagreeeing with Mr. Yordan and thinking it very good.

King and, especially, Peck, in his dark costume, manage to infuse the story with tension and drive, and the stern implacability of the vengeful Douglass is very well done. Peck confessed he found it hard to be such a ruthless character. The glare he gives the badmen in their cell in the first reel makes them (all except the Indian) wilt, averting their eyes and hanging their heads, and it’s not surprising, for Peck is magnificent in this scene.  The music, by Lionel Newman, helps the atmosphere: it is much admired and it augments the sinister coloring.

Gene Evans plays a miner, the neighbor of Douglass, the one who told him about the four men after the rape/murder. The remaining killers arrive at his shack, and he does not fare well. After his demise, though, he will play a significant part in the plot, which has a twist.

The film is further weakened by a tacked-on happy ending which jars, and which goes some way to negating the powerful message that the picture was all about. But the majority of it is fine, and it makes us ponder. We are very used to the pursuit/revenge plot in Westerns: in a land with little official law and order the idea is that a man must make his own law, the law of the six-gun. But here we have to ask ourselves, is this right, or even effective?

Peck stated that the movie was an attack on McCarthyism, which he strongly opposed. Not quite sure about that. Maybe star, writer and/or director felt that but it doesn’t really come across as such to the viewer, or to this viewer anyway.

For me, The Bravados is Gregory Peck’s third best Western, and that’s no small thing.