When I saw the title Brimstone in the TV listings as a Western, I hoped it would be a cinematic version of Robert B Parker’s 2009 novel of that name. I much enjoyed Appaloosa (2008) and have been (silently) urging Ed Harris to do another Virgil Cole/Everett Hitch story for some time. But nay, this Brimstone is a recent(ish) Eurowestern which is currently being screened on OCS. 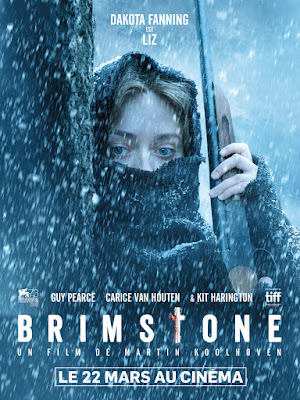 Eurowesterns have come a long way since the bad old days of the 1960s. Some of them nowadays are even quite good.

This one reminds me a bit of the Danish picture The Salvation (2014), directed by Kristian Levring and starring Mads Mikkelson. It too depicts a West that is a bleak, forbidding, Nordic place and an appropriate setting for an angst-laden story which concerns crime, punishment and doubtful redemption.

The Salvation was actually shot in South Africa. This one was filmed in a variety of European locations, Hungary, the Tyrol and good old Almeria, for old times’ sake (and immediately recognizable). The DP was Rogier Stoffers, a Dutchman, and the picture was directed and written by another Netherlander, Martin Koolhoven. Just as The Salvation featured Danish immigrants to the US, so this one concerns Dutch settlers, and English star Guy Pearce had to affect English with a Dutch accent, which is apparently difficult. 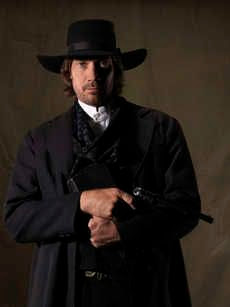 Reverend with a gun

Pearce’s character is known simply as The Reverend, though I was always taught that reverend was not a noun but an adjective, and you should address a clergyman as Mr. Smith, say, and refer to the Reverend Mr. Smith, but things have changed and you now talk about a reverend. The Reverend is a religious maniac, or at least a deeply evil man who uses religion to justify his wickedness. And he is seriously and creepily evil, a cold-blooded killer, brute, incestuous rapist, debaucher, pedophile and, perhaps, the devil. Because of this, Brimstone is not an easy film to watch. Don’t put it on if you are looking for light entertainment. 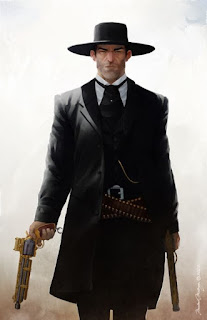 Brimstone is after all sulfur, well-known as the hornèd one’s nonmetallic chemical element of choice, and The Reverend’s sermons almost exclusively concern the pains and torments that await those who transgress. You almost wish there were a hell, so that he might descend to it. He does know he’s going there, though. It seems to liberate him; he argues that he can commit any horror because he’s damned anyway. Funny kind of preacher.

A major weakness of the film is that it is self-indulgently long, at 148 minutes, though to be fair to it, I didn’t find that it dragged – much, anyway. It’s rather like modern books: those responsible for them feel somehow obliged to produce works that take weeks to read or hours to watch. Don’t they know that less is more?

It is divided into ‘chapters’ of slightly biblical hue, labeled, in upside-down biblical order, Revelation, Exodus, Genesis and Retribution, each separated from the other by five seconds of black-screen pause for thought (or to reel). Narrative-wise, the first ones seem to go trendily backwards, telling the backstory later.

It is the tale of a midwife, Elizabeth (American actress Dakota Fanning) who is faced with an awful choice of saving the life of a baby or the mother, and sacrifices the infant, for which she is blamed as a murderess by the drunken father (Bill Tangradi) and condemned by The Reverend as a sinner for having usurped God’s decision (presumably he would have preferred both mother and baby to have died). She is therefore ostracized by the community. She seems to have a deep fear, even horror of The Reverend. Perhaps she sees him as the devil, though her decent husband Eli (William Houston, also English) is quite pro-preacher and tries to convince her otherwise. She proves to have been nearer the truth than he. 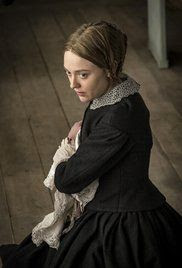 I won’t recount the whole story here. It would (a) take too long and (b) might spoil your enjoyment if you watch the movie. Suffice to say that the reasons for Liz's antipathy become apparent.

There are scenes of brutality, to humans and animals, that are hard to take. A whore is hanged because she shoots a customer with a derringer. The deceased cyprian’s elderly father challenges the saloon owner Frank (Paul Anderson, Arthur Shelby in Peaky Blinders) to a quick-draw Main Street duel, and loses. A scold’s bridle figures largely. Tongues are cut off. It’s not a pretty picture. 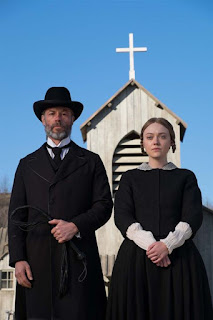 It’s a ‘serious’ Western, not a throw-away, and much effort has clearly gone into it. Some of the scenes are beautifully photographed. It is sometimes tense and it makes the viewer edgy.

But I wouldn’t want to watch it again.