Now listen to me: somebody steps on your rights, go after him. Never give up - never.
Just be smarter than I was.

I rather enjoyed HBO’s 1999 offering The Jack Bull, aka Wyoming Story. It’s a straight ‘arrogant rancher vs. decent homesteader' plot, and we’ve seen that very many times, but when it’s done well, as it is here, it’s always a good one. And the hero wins, but he also doesn’t.

Based, so they say, on a true story, and also using Michael Kohlhaas, a novella by the friend of Goethe and Schiller Heinrich von Kleist (1777 to 1811), who wrote The Marquise of O, the screenplay, or teleplay, was written by Dick Cusack and starred Dick’s son John. 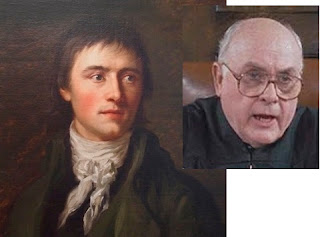 The writers (Heinrich is on the left, in case you were wondering)

Wyoming on the eve of statehood, 1889. Odious rich rancher Henry Ballard (LQ Jones, in an excellent performance) is one of those prepotent cattlemen we Western fans know about, the kind who buys out honest farmers or bullies them out of their land, a man who “wants the whole valley”, in that way that ruthless cattle barons do, and will stop at naught to get it. They always argue that they got there first and fought the Indians for it so it's theirs, and dirty sodbusters with their fences are scum. 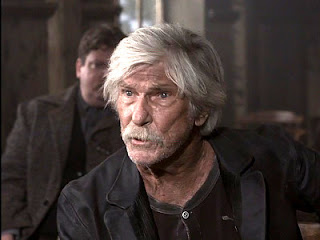 LQ good as the bad guy

At first staying relatively neutral but soon forced to take sides (a bit like Glenn Ford in The Violent Men) is horse trader Myrl Redding (John Cusack, in his only oater), a straight-up Westerner who has a thriving business, a beautiful wife, a young son who has a way with horses, and good relations with the Crow Indians, especially his friend Billy (Rodney A Grant, outstanding as always). It’s an ideal set-up, so good in fact that we know it is destined for ruin. 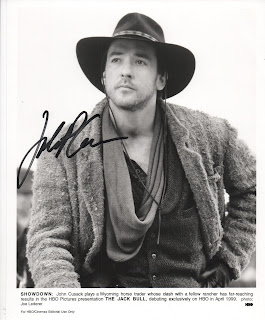 He should do more Westerns

Shot in Calgary, as so many Westerns were at that time, it is a good-looking picture, photographed by Gale Tatersall (his only Western too) with nice sets by Louise Middleton. I especially liked the rustic barber/saloon, Kermit’s, where a fair bit of the action takes place. It reminded me a bit of the store/saloon in Shane. 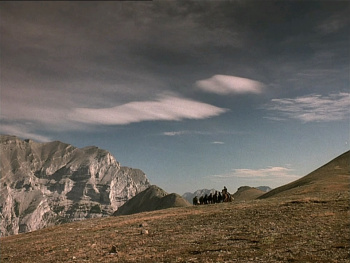 Alberta pretending to be Wyoming, and doing a good job of it - looks quite Wyomingish

The music, though, is a weakness, slushy faux-romantic 90s stuff by Lennie Niehaus, who did a much better job on Unforgiven (1992), which the score for this picture tries in some ways to echo.

All in all, though, the production values are high, and the direction, by John Badham, the Saturday Night Fever guy, satisfactory.

Although he doesn’t appear at all until the second half of the picture, John Goodman pretty well steals the show as a crusty judge with a heart of gold and utter respect for the law, a figure who contrasts greatly with the sniveling, pusillanimous other ‘dignitaries’ (who are dignified in no way) that surround him such as the corrupt local Judge Wilkins (Ken Pogue), the reptilian lawyer Conrad (Kurt Fuller), the mendacious Sheriff Felton (Brent Briscoe), the incompetent Attorney-General Metcalfe (Jay O Sanders) and the unnamed governor (Scott Wilson), an oily politician of the worst kind - though the real last Territorial Governor and first State Governor of Wyoming, Francis E Warren, doesn’t appear to have been an especially reprehensible type. 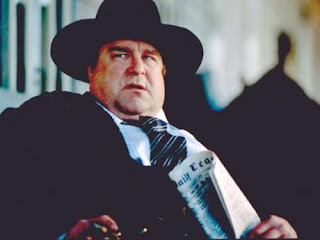 This is standard fare for a Western. The good guys are the Westerners in range duds while the villains are Easterners in suits.

Rancher LQ is especially obnoxious and erects a toll gate.  To get to the horse auction Myrl must pay $10 to cross. He doesn’t have it, so leaves a pair of fine stallions as deposit, to be recovered on the way back. But LQ’s lowdown henchman Slater (John Savage) cruelly maltreats the beasts and they are in a very sorry state when Myrl comes back – and he gets angry. He demands restitution, doesn’t get it, and the slimy local judge is in the rancher’s pocket. Myrl’s wife sets off to Cheyenne to petition the Attorney-General (whose wife she knows) for redress.

There are a couple of examples of the ‘idiot plot’, such as when a wagon runs down Mrs. Redding in Cheyenne and she doesn’t get out of the way, just goes, Aaahh!, and when a farmer opens fire on Mr. Redding and shoots his own wife by mistake. One’s immediate reaction is Doh. But I guess accidents like that do happen.

The loyal farm factotum (John C McGinley) brings back the corpse of Myrl’s wife and there’s much boo-hooing all round. Myrl decides he will sell out to a neighbor and use the money to raise a posse and go after justice. 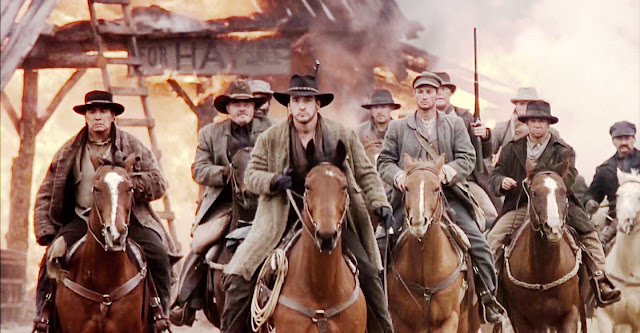 This is where the action starts, and Myrl leads his gang of gunmen to hunt Ballard down and get him to restore the horses to their proper state, or else. Bloodshed ensues, through no wish of the protagonist (for he is the goody) but nevertheless the repellent Slater, the horse-beater, and the farmer’s wife too die (mind, she was shooting at an unarmed man who was shouting, “Hold your fire!” so it served her right really). The Governor doesn’t have enough Army troops to do anything about this insurrection and offers Myrl a deal – amnesty and reopening his case if he will come in and lay down his arms. He accepts.

The rest of the movie concerns the hearing, and Myrl’s trial, and its outcome. He has to combat gross perjury and political shenanigans. Judge Goodman is basically on Myrl’s side but the law is the law. The outcome is satisfactory in one way and a gross perversion of justice in another.

As I said at the start, I think it’s quite good, and it would repay a watch. It’s on Netflix at the mo' (here in France anyway).